Saturday morning, at the Fencing tournament:

Their Royal Majesties called forward Baron Benedict Fergus atte Mede and presented him with a writ to determine when he would sit vigil to become the 4th Master of Defense of Æthelmearc.

Their Majesties called before Them Don Orlando di Bene del Vinta. After returning his yellow belt  to his Pelican Mistress Irene von Schmetterling, Their Majesties sent him to vigil to contemplate his elevation as Æthelmearc’s second Master of Defense.

Their Majesties summoned THL Arnthor inn sterki, who testified that he had sat vigil as instructed, and was now prepared to receive the acclaim of Knighthood, should Their Majesties still wish to bestow it upon them. Sir Stevan Ulfkellson spoke of Arnthor’s worthiness, and the Knight’s belt as the symbol of purity. Sir Tarl MacLave spoke of
Arnthor’s Peer-like qualities of teaching. Master Aengus MacBain spoke of Arnthor’s skill and research in the art of bone carving, and his teaching of that art to others. Mistress Constance Waite spoke of Arnthor’s many years of service. Viscount Bear the Wallsbane spoke of Arnthor’s upstanding courtesy and chivalry. Arnthor was invested with a set of ancestral spurs by Duke Titus, a belt of chivalry by his lady, and a Knight’s chain by Sir Tarl. His Majesty mused that, while it is the law of the Known World that only a King can make a Knight, He saw things differently, namely, that each person walks the path of Chivalry on their own, and as King, it is his privilege to recognize when one has made that journey as Arnthor had. His Majesty then dubbed Arnthor a Knight of the Society, Granted him Arms by Letters Patent, named him a Peer of the Realm and rendered unto him his last unanswered blow. A scroll by his lady was read, and finally Sir Arnthor was wrapped in a cloak from the Shire of Hunter’s Home.

His Majesty spoke of a piece of business that He had watched undone for the 25 years that He had stood as Knight of the Society, and that it was now his pleasure to see it finally brought to fruition. He then assembled the Order of Chivalry, and with their assent, invited Mistress Cunen Beornhelm to join Him in Court to accept a Writ of Summons for elevation to that Noble Order. Scroll forthcoming.

Lady Cionaodh Gunn, the event steward for War Practice, gave thanks to her staff and all those who had made the event such a rousing success.

Ichijo Honen, Shugo-daimyo of the Barony of Blackstone Mountain, presented the Kingdom with a $500 donation to the Kingdom Trailer fund, and presented a challenge to the other Landed Nobility of Æthelmearc to do likewise.

Mistress Arianna of Wynthrope, who had overseen the Youth Champion tournaments of the day, was invited forth to inform Their Majesties and the populace of the results of those tournaments. While all who entered showed great chivalry and honor among the field, two demonstrated prowess above and beyond all others, and thus Henry was named the Division I Youth Combat Champion, and Ulf was named the Division II and III Youth Combat Champion. Scrolls illuminated by THL Ursula of Rouen and calligraphed by Lady Ylaire Sainte Claire upon words by THL Ursula.

Henry and Ulf are invested as Youth Champions. Photo by Master Alaxandair O’Conchobhair.

The children of the Kingdom were summoned forth, and invited to the back of Court where THL Hrefna Ulfvarinnsdottir had games and activities for their amusement.

Thora of Olach Lacha was Awarded Arms for her enthusiasm and assistance to all who need it, as well as her spirit and prowess as a heavy fighter. Scroll by Mistress Maria Christina de Cordoba.

Arlian was Awarded Arms for his skill as a fighter, as well as his volunteering to transport others to events and practices. Scroll by Baron Caleb Reynolds.

Baron Robert of Sugargrove is made a Laurel. Photo by Lady Valentina de la Volpe.

Baron Robert of Sugar Grove was called forth and presented his block plane, the tool of his trade, to Their Majesties, that They might return it to him if They deem him worthy of being named a Master of his craft. Viscountess Judith of Kirtland recalled when she and Viscount Syr Bear sat on the thrones of the Principality of Æthelmearc, and how jealous she was of the luxurious thrones of the East, which had been crafted by Robert 14 years previous. Viceroy Sir Gui Avec Cheval of the Kingdom of the East proclaimed that Robert had the true heart of a tiger, for the two of them had fought side by side many times, and Robert’s courage never failed. Master Tigernach Mac Cathail spoke to the many hundreds of hours that Robert has labored in service to his Kingdom, creating thrones, boxes, and other wooden treasures. Master Gille MacDhonuill called Robert a master artisan and teacher, with vast knowledge of how period craftsmen knew and learned their craft. Viscountess Judith then conveyed the words of Master Ali Abbas al Gazzaz of the Kingdom of the East, who named Robert a kindred soul, for they both, as craftsmen, put their words into their actions. Their Majesties, being thus moved by these good words, adorned Robert with the regalia of the Order of the Laurel, being a medallion, a cloak, and a wooden wreath. Robert gave his homage to Their Majesties and exchanged Oaths of faith with Them. Their Majesties then named him a Peer of the Realm and a Companion of the Laurel, Awarded him Arms by Letters Patent, and returned to Master Robert the tool of his craft. Scroll by Master Jonathan Blaecstan of the Kingdom of the East.

Lord Enzo de Pazzi was granted admittance into the Order of the Golden Stirrup for his devotion to creating authentic armor. Scroll by Mistress Kay Leigh Mac Whyte of the Kingdom of the East. 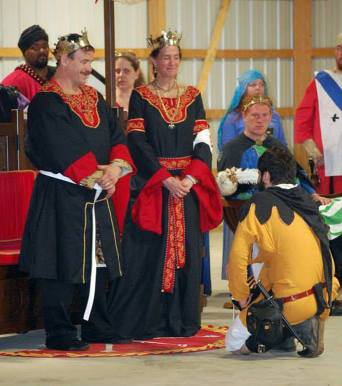 Mistress Jenna MacPherson of Lion’s Tower was created a Companion of the Golden Alce for her study of heavy fighting and her tutelage of the youth of Æthelmearc in the combat arts. Promissory scroll by Maîtresse Yvianne de Castel d’Avignon.

Lord Thorstein Thorgrimsson was elevated to the Order of the Golden Alce for the enthusiasm with which he has transitioned from Youth Combat to Adult Combat, and for his especially strong showings in newcomers tournaments. Scroll by THL Tegrinus de Rhina.

Lord Uaithne Mac Faelan was named to the Order of the Golden Alce for his diligent study and training of the combat arts, often staying on the field long after others have retired in order to analyze his own fighting, and for seeking out those who have achieved Knighthood in order that he might learn from them. Scroll illuminated by Lady Isabel Fleuretan and calligraphed by  Kameshima-kyō Zentarō Umakai. 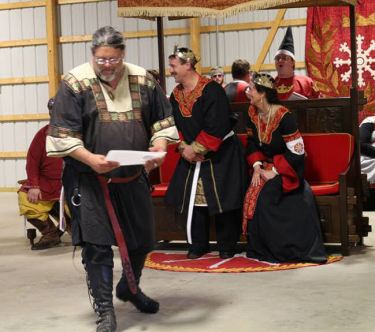 Lord Nicholas Hossbalder was created a Companion of the Golden Alce for his study and skill in heavy combat, and for his teaching those same arts to others. Lord Nicholas was presented with two scrolls commemorating his admission into this order, one by Mistress Liadin ní Chléirigh na Coille and the second by Mistress Fredeburg von Katzenellenbogen.

Lady Arianna dal Vallone was admitted to the Order of the Sycamore for her great skill in both cooking and jewelry making. Scroll by THL Sophie Davenport.

THL Morien MacBain was elevated to the Order of the Sycamore for his pursuit of the bardic arts, bringing music to the combat field, the fireside, and the Kingdom. Scroll illuminated by Frau Saskia Feldmeyrin and calligraphed by Baroness Alex upon wording by Jeanne de Penthièvre. 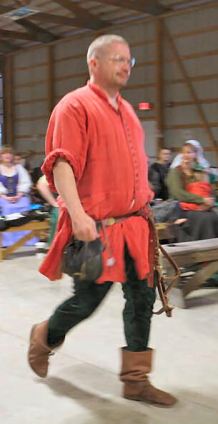 Don Orlando di Bene del Vinta was brought into Court to answer the summons set before him. He surrendered his rapier to Their Majesties until such time as he might reclaim it as a Master of Defense and Peer of the Realm. Countess Kallista Morgunova declined to speak of either his prowess or his charm, though both are great, but rather of his honor and loyalty to Æthelmearc and her people, and of his personification of the Dream that we strive for. Mistress Euriol of Lothian recalled the 12th Night where she met Orlando, when his singing silenced the room, how he taught her the meaning of true courtly love, and how he exemplifies the art of the Dream. Mistress Irene von Schmetterling, to whom Don Orlando had been protegé, proclaimed the service he had rendered to Æthelmearc, both as fencer and as musician. Duke Sir Titus Scipio Germanicus spoke of the similarities between the Orders of Chivalry and Defense, and how Orlando served as an inspiration and example. Duchess Dorinda Courtenay, Æthelmearc’s first Mistress of Defense, reminded the Kingdom that the Order of Defense is not one of many years and great traditions, and so Orlando knows that this day is not just about him, but about creating something for those that will come after him. Their Majesties then named Orlando the 2nd Master of Defense in the Kingdom and a Peer of the Realm, Awarded him Arms by Letters Patent, and presented him with regalia appropriate to his new station: a pair of garters, a cape, the Ancestral livery collar of the Order of Defense, and a livery collar for Maestro Orlando’s personal use. Don Diego brought forth the Book of the Lineage of Æthelmearc’s Order of Defense, and that lineage was read. Maestro Orlando then gave his Oath of Fealty as a Master of Defense and received his sword from Their Majesties. Scroll by Mistress Arianna of Wynthrope.

All those who contributed time and effort to the scrolls presented during Court stood and were recognized by Their Majesties and the Kingdom.

Her Majesty spoke at length of the service and courtesy of THL Marcus Cincinnatus, Windmill Pursuivant, who volunteered when Their Majesties were in need of a herald and conducted Sir Arnthor’s elevation to Knighthood. She proclaimed that Marcus had received her token of inspiration before Court.

Dame Bronwyn reminded the populace that one week hence, a muster and Kingdom Work Session would be held to prepare Royal Regalia for the upcoming Pennsic War.

Lord Howard Bowman was invested into the Order of the Keystone for his service as event steward and his assistance wherever it is required. Scroll by Gillian Llewellyn of Ravenspur.

At the conclusion of the tournament: 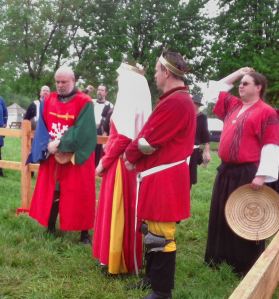 Sir Thomas Byron of Haverford, having proven himself victorious in the morning’s tournament, presented himself before Their Majesties, who named him as the Heavy Weapons Champion of Æthelmearc. The scroll by Baroness Ekaterina Volkova was held by Their Majesties until another time when the weather would be more agreeable to present to Sir Byron.

In Honor and Service,