Documented from the Scrolls of the Reign of Timothy & Gabrielle II, King and Queen of Æthelmearc: the Business of Their Majesties’ Court at Army Muster, Æthelmearc Æcademy and War College, 4 July Anno Societatis L, in the Shire of Stormsport. As recorded by Their Silver Buccle Herald, Kameshima-kyō Zentarō Umakai. 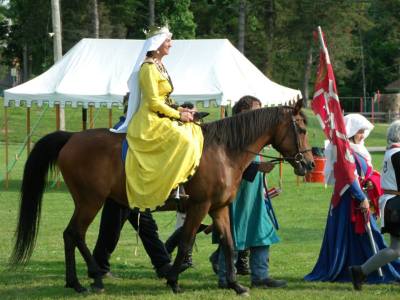 Their Majesties summoned Their Order of the Pelican, then called for THL Zoe Akropolitina. Zoe asked for a moment before being sent to vigil, and such being given, returned the belt that marked her as Mistress Jenna MacPherson of Lion’s Tower’s protegé, and also returned the trappings she had received from Mistress Alexandra dei Campagnella and Sir Alonzio of the Peacemakers. Being now relieved of her obligations, Zoe was now free to contemplate elevation to the Pelican, and so was escorted by the Companions of the Pelican to the vigil set for her.

Following the presentation of the riders competing to be Æthelmearc Equestrian Champions:

Their Majesties, knowing well the effort put into competitions like the one about to commence by the horses as well as the riders, They inducted Finn, Mira, Mouse and Rex into the Sylvan Steeds.

Their Majesties invited all th 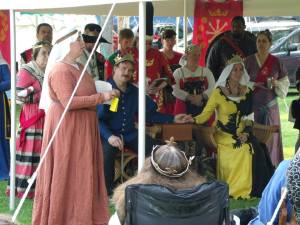 e children present to follow Lady Alethea Cowle to the back of Court, where there were treat bags that they might amuse themselves through the business of Court.

Her Excellency Alicia Langland, Chancellor of the Æthelmearc Æcademy, along with Their Excellencies Fridrikr Tomasson and Orianna Fridrikskona, Kingdom Arts and Sciences Ministers , asked for time in Their Majesties’ Court to thank all those who attended and taught at the event. Mistress Alicia then further spoke of one who had taught at Æcademies for decades, and thus duly impressed with his dedication to the education of the Kingdom, named Baron Will Langdon of Greymorne as a Fellow of the Æcademy.

The equestrians of the Kingdom came into Court to witness Shishido-nagon Tora Gozen accept Lady Maeve ni Suirtain as her equerry.

While Lady Maeve was in Court, Their Majesties recognized her for being a backbone of the equestrian community as well as a liaison for newcomers, and so named her a Companion of the Golden Alce. Scroll by Countess Aidan ni Leir. 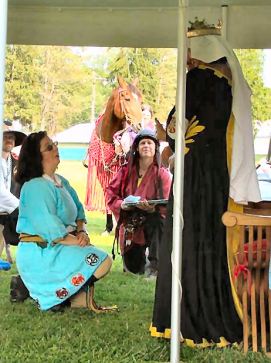 Lady Maeve is inducted into the Golden Alce. Photo by Mikus Magellus.

While the other equestrians were in Court, Their Majesties invited Mistress Ysabeau

Tiercelin to attend them, and for her devotion to the Æthelmearc Gazette and the Kingdom, created her a Baroness of the Court. Copper scroll etched by Baroness Ekaterina Volkova. Coronet created by Lord Magnus de Lyons, Coronet box by Lord Rhiannon Elandris.

THL Meadhbh inghean ui Bhaoghaill, the King’s Equestrian Champion, was brought forth to announce her successor. She took a moment to thank all those who had contributed to the equestrian community in Æthelmearc, then announced that Shishido-nagon Tora Gozen had emerged as the victor, and she was named King’s Equestrian Champion, invested with the regalia of her station and invited to join Their Majesties’ Court. 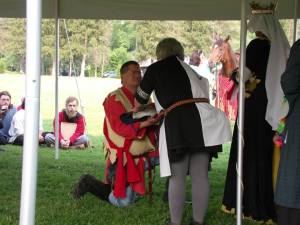 Lord Alrekr Bergsson, who had marshaled the day’s archery shoot, came forth and announced that Maestro Jacopo di Niccolo had outshot all the others and won the day. Maestro Jacopo, however, offered the prize for the competition to Linette of Arindale, who had been the only youth to compete against the adults in the competition.

Broddr Refsson presented Their Majesties with a piece of art he had created commemorating Æthelmearc’s alliances in the upcoming Pennsic War.

Lady Adeliz Argenti was inducted into the Order of the Keystone for her many years of service to the Kingdom, including serving in kitchens as well as providing assistance to the marshals and ministers of the lists. Scroll by Countess Aidan ni Leir. 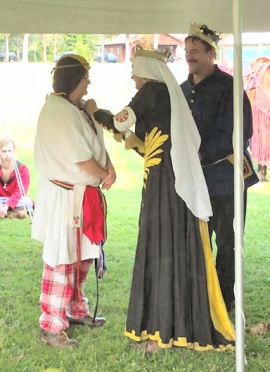 Baron Meszaros Janos was created a Companion of the Fleur d’Æthelmearc for his research into period cooking, and his development of the Food Lab, which is a traveling kitchen that allows period cooking under almost any circumstances. Scroll in progress illuminated by Lady Isabel Fleuretan to be calligraphed by Kameshima-kyō Zentarō Umakai. 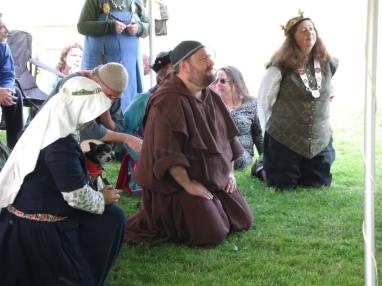 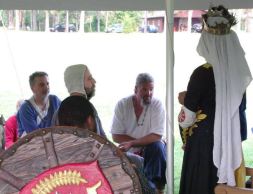 Sir Steffan then also announced the gentles present who had qualified to be chosen for the Allied Champions’ Heavy Weapons Battle at Pennsic. He then announced Baron Vladisla Nikulich, THL Jussi Laplein, THL Ian Kennoven, THL Bluestar, and Baron William Freskyn Murray. Their Majesties bade Sir Steffan hold a moment, for They had business with Baron William, who was the only fighter announced who was not in the Order of the Gage. They then inducted Baron William into that Order for his prowess in heavy weapons, as well as his marshaling and teaching of those skills to others. Scroll illuminated by Baroness Anastasie de l’Amoure and calligraphed by Kameshima-kyō Zentarō Umakai upon wording by Baroness Alex. 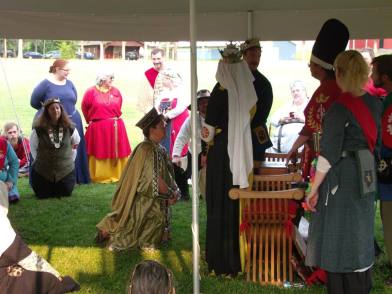 Their Majesties then called for THL Zoe Akropolitina and the Companions of the Order of the Pelican. Zoe confirmed that she had received counsel from the Companions and others present at the day’s event, and she was prepared to receive elevation to that Order. Duchess Tessa the Huntress praised Zoe’s devotion to training and recruiting for both combat archery and youth combat, two pursuits that were near and dear to Her Grace when she was Queen. Sir Alonzio of the Peacemakers recalled his days as Baron of the Debatable Lands, when Zoe decided that the Baronial encampment at Pennsic needed walls and towers, and arrived with all the materials and “just made it happen.” 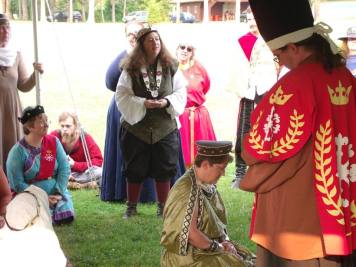 Duchess Dorinda Courtenay, Æthelmearc’s Principal of the Order of Defense, while musing about the current arguments about what the purview of the Order of Defense in Peerage ceremonies would come to be, spoke to Zoe’s defense of the Kingdom, for she has not only taught both adults and youth how to defend Æthelmearc, but even more importantly, has taught others how to teach still others effectively. Mistress Fredeburg von Katzenellenbogen of the Order of the Laurel praised Zoe’s skill in crafting, specifically, in crafting joy and inclusion, that any who wish to be part of our Society will feel welcome and knowledgeable.

Sir Sextus Plinius Callidus of the Order of the Pelican and former Society Marshal for Youth Combat testified to the countless hours that Zoe devoted to youth combat, both in Æthelmearc and at Pennsic War, and called her an angel of life and death. Being moved by the testimony of these Peers of the Realm, Their Majesties named Zoe to the Order of the Pelican, granted her Arms by Letters Patent, and presented her with the ancestral Pelican medallion of Æthelmearc, a personal medallion, and a cloak bearing the badge of the Order. Mistress Zoe Akropolitina then presented her Oath of service to the Crown. Scroll by progress by Mistress Liadhain ni Chleirigh na Coille.

Those who had donated time and effort towards the scrolls given out that day were invited to stand forth and be recognized.

Her Majesty recognized Lady Rowena MacCara for her generosity in allowing so many others to ride on her horse Mira and her diligence in assisting with the cleanup of the equestrian site, and Mira for being so amenable to the day’s activities, as Her inspirations for the day. 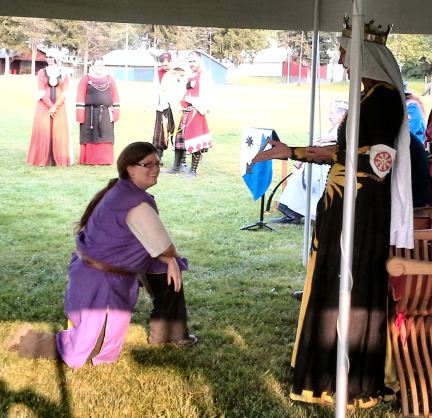