Mistress Arianna of Wynthrope reports on the happenings at the Iron Comet event.

On August 29, A.S. 50, the Barony-Marche of the Debatable Lands held its Iron Comet event. The theme of the event was “The Hunt,” including all things martial with a side of Arts and Sciences. There were tournaments for Equestrian, Rattan, Rapier, Youth Combat, Archery, and Thrown Weapons. To become the Iron Comet Champion, adult participants had to enter the Rattan, Rapier, Archery, and Thrown Weapons tournaments, along with an Arts and Sciences competition. Youth competitors only had to enter three of Archery, Thrown Weapons, Youth Combat, and Rapier, as well as the A&S competition.

All of the rapier and heavy weapons competitions were decided by bear pit tournaments, which rewarded endurance as well as skill.

In the rattan bear-pit tournament organized by Lord Robert Pour Maintenant, each fighter received two points for a win and one point for a loss. Nine heavy fighters competed, with THLord Jussie Laplein proving victorious with 45 points. Lord Robert noted that the levels of both ferocity and courtesy in the list were impressive. 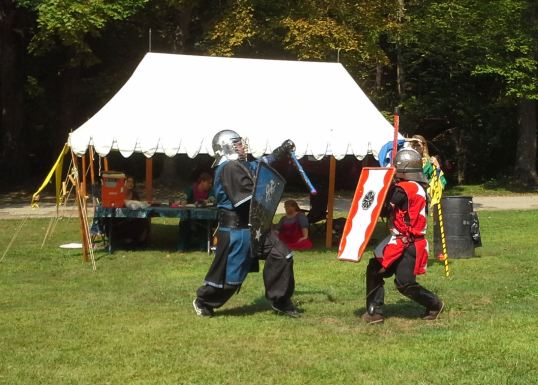 In the rapier tournament, Sir Kadan Chákhilgan Ger on Echen was the winner in a field of 13 fencers. The tournament, marshaled by Doña Gabrielle de Winter, gave fencers 3 points for a “clean” kill (without taking any of their opponent’s limbs), but if the winning fencer took one of their opponent’s limbs, they received 2 points, and if they took two limbs before besting their opponent, then they received only 1 point for the victory. It was noted that this resulted in an interesting change of fighting style since it was counter-productive to go for an opponent’s hands or legs. After the tournament, Doña Gabrielle took Lady Ragna Hakonardottir as her cadet, to the vivats of the assembled fencers.

The thrown weapons tournament, organized by Lady Melodia Beaupel, used standard targets with an unusual scoring system. There were four sets of targets: at the first target, throwers had one axe and one knife, and scored 3-2-1-0 from center of the target outward. At the second target, they had the same options as the first target, but the scoring was reversed, so the outer ring was worth 3 points while the inner ring was worth nothing. Both of those targets were thrown from a distance of 10 feet, while the third target was at 20 feet, with throwers using any two weapons and the scoring the same as the first target. The final target was javelins thrown at a distance of 15 feet, receiving 1 point for hitting the cardboard and 2 points for hitting anywhere on the bullseye target. Lord Robert MacEwin of Thornhill won the Thrown Weapons tournament. 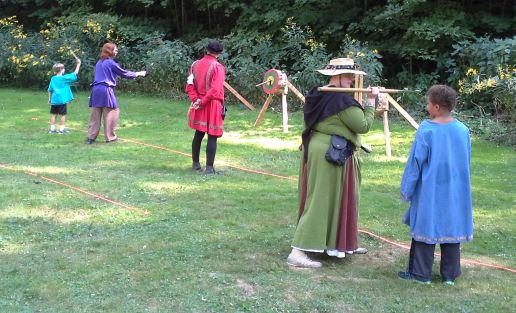 Maistir Brandubh o Donnghaile’s archery tournament featured pictures of small woodland creatures that archers had to shoot. Archers could use up to 30 arrows (5 flights of 6) to shoot two turkeys, two squirrels, two rabbits, two swallows, and a duck. Archers received one point for each “critter” they shot, and another point for every arrow of the 30 left unshot after they hit all nine critters. Lady Ghaliya bint Jusef won the competition with a score of 25 points. 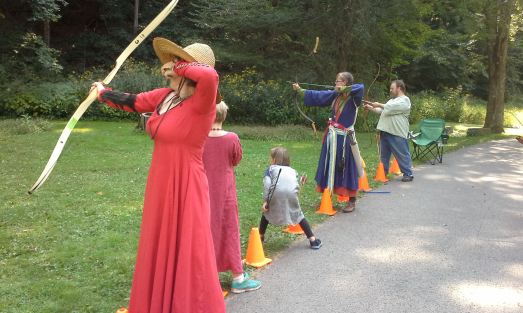 Children and adults competed on the Archery range. Photo by Mistress Arianna of Wynthrope.

The youth combat bear pit tournament, organized by Mistress Arianna of Wynthrope, included six participants, most of them Division 1 fighters. Jay, a brand new youth fighter who was attending his first SCA event and authorized that day, proved victorious. For his prize, Jay received a small wood box with a carved wooden castle. Sarah, who placed second, received a suede pouch, while Karl received a token from the marshal for his enthusiasm and chivalry. 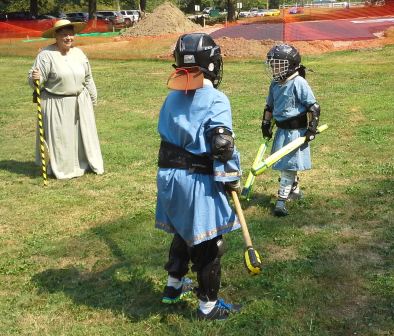 The equestrian competition was held in a ring down the road from the other martial activities. Organized by Lady Aaliz de Gant, it was based on “Monty Python and the Holy Grail.” THLord Morien MacBain said, “Competitors jumped a shrubbery, cut heads off the Knights Who Say “Ni” and the uppity taunting Frenchmen, and threw javelins and ultimately the Holy Hand grenade of Antioch at the Killer Rabbit.” In addition, Lady Aaliz conducted training sessions with 5 authorizations, so there are 5 new riders of AEthelmearc! The morning run was won by THLord Morien riding Lady Rowena’s Halflinger war pony Mira, and the afternoon run was won by Mistress Tora Shoshido Gozen on her Arabian, Rex, but when the scores were totaled, the overall winner was THL Morien MacBain by one point. THL Rhiannon Elandris traveled all the way from the Rhydderich Hael to assist the equestrians by groundcrewing for the day, along with Lady Husung who recently moved to the Debatable Lands from Thescorre.

The Arts and Sciences competition organized by Ishiyama-roku-i Gentarou Yori-ie featured entries ranging from cooking to painting to spinning and cord-making to performing arts. Event-goers received two tokens to bestow on entries: one for the entry they liked best, and one for the entry they felt best embodied the event theme of “the Hunt.” Mistress Aleea Baga won the competition with a medallion for the Order of the White Horn. 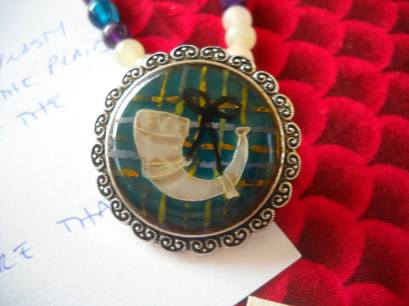 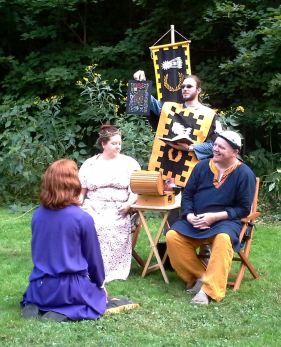 Lord Robert MacEwin of Thornhill, winner of the Iron Comet by one point. Photo by Mistress Arianna of Wynthrope.

Two gentles competed for the overall adult Iron Comet championship, while three children entered the youth division. The adult competition was closely contested with Lord Robert MacEwin of Thornhill winning by one point over Wulfgar Ronaldson, while Otto Brandulfarsson won the youth division competing against Ian Dalicieux and Carl Brandulfarsson. Their Excellencies noted that Lord Robert won the Youth Iron Comet Championship the last time the event was held, about 2½ years ago.

Throughout the afternoon, a light repast of chicken, rabbit, roast beef, fruit, bread, mixed beans, and salad was provided by THLady Elss of Augsburg with assistance from Mistess Katla úlfheþinn and Mistress Mahin Banu Tabrizi. The sideboard ended with cupcakes in various flavors.

That evening at baronial court, in addition to recognizing the various tourney winners, Their Excellencies Liam and Constance, Baron and Baroness of the Debatable Lands, bestowed a Blue-Silver Comet for arts on Lady Ceindrech verch Elidir for her skill in fiber arts and choral singing, and conveyed completed backlog Blue-Silver Comet scrolls to Master Kameshima Zentarou Umakai and Lady Rivka bat Daniyel. 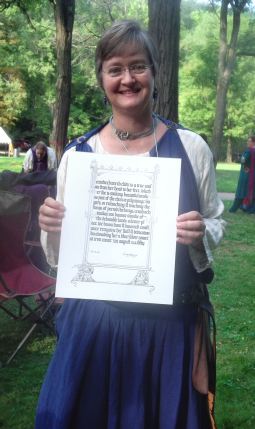 Their Excellencies also bestowed the baronial youth award, the Purple Comet, on Otto Brandulfarsson and Carl Brandulfarsson, and a Red Comet for martial skill on Lord Robert MacEwin of Thornhill. 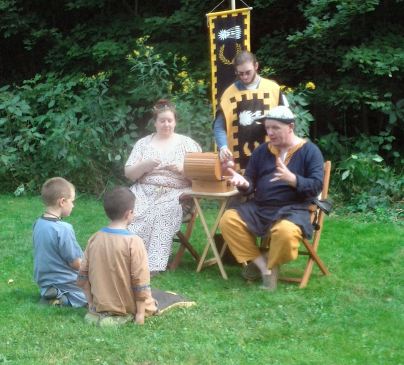 There was also a 50/50 raffle to benefit the Barony, which was won by THLord Deryk Archer.

In all, it was a pleasant event at a lovely site, with beautiful weather. Congratulations to the autocrat, Baroness Elizabeth Arrowsmyth, and her staff.