Documented from the Rolls and Files of the Coram Regibus of Thomas Byron Rex and Ariella Regina, King and Queen of Æthelmearc: Being a True Record of the Business of Their Royal Court at Blackstone Raid XXV, 30 April, Anno Societatis L, in the Barony of Blackstone Mountain. As recorded by Gwendolyn the Graceful, Brehyres, Jewel of Æthelmearc Herald, with the assistance of Lady Katherine McClung, Millrind Herald, and Lord Arias Beltran del Valle, and Baroness Anastasie de Lamoure, Silent Herald.

Their Majesties invited forward those children in attendance. With the permission of their parents, the children were encouraged to see Lady Astrid vigaskegg for activities and treats to amuse them during Court.

Their Majesties brought before Them Baron Ichijo Honen and Baroness Cerridwen de Skeine. Before giving them leave to conduct the business of their Baronial Court, Their Majesties demanded that the Baron and Baroness duly swear their fealty to the Crown. Such fealty being given and received to Their Majesties’ satisfaction, Their Excellencies held their court.

Their Majesties next invited Count Sir Jehan de la Marche to approach. His Excellency offered his own personal fealty to the Crown, and thereupon asked the Court to witness as he renewed his relationship with Master Morien MacBain as both squire and apprentice. 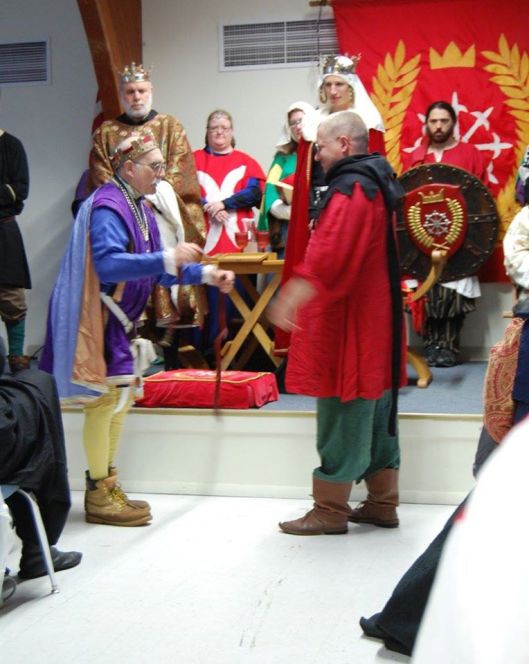 Their Majesties then received Octavius Flavus, a visitor from distant lands. This gentle carried with him words of wisdom from a far shire, which he had transformed into a scroll of his own illumination, calligraphed by Beatrix. Their Majesties accepted it with pleasure and promised to provide Their own message for Octavius to take with him on the next leg of his continuing journey.

Their Majesties next sought Lord Borislav of Novogord. Her Majesty spoke of the many steps fighters must take to perfect their armor and weapons, the dedication necessary to fight in all weathers and at all times, and the skill developed over time in the face of such dedication. In recognition of Borislav’s efforts and skills, They named him a Companion of the Golden Alce. Scroll forthcoming.

Next Their Majesties summoned The Honorable Lord Tegrinus de Rhina, and questioned him regarding his service to his group as Knight Marshal, as well as performing setup, teardown, and other labors for groups throughout the kingdom. To recognize his long service, They named him a Companion of the Keystone. Scroll by Misress Arianna of Wynthrope. 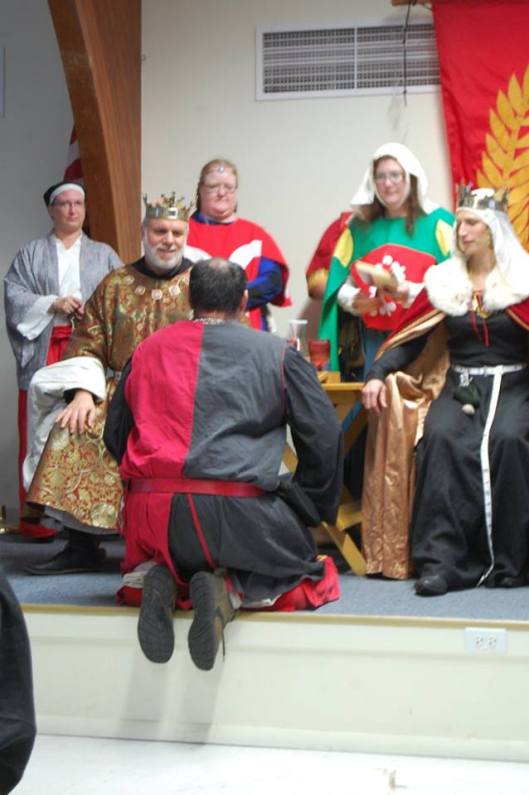 Their Majesties next sought Lady Reina Dulcedame. The Lady being not in attendance, Their Majesties asked Dame Hrefna Úlfarvinnsdóttir to carry Their words, and named Lady Reina a Companion of the Keystone. Scroll by The Honorable Lady Ismay Ponde on wording by Count Jehan de la Marche.

Lady Crystal MacUrsus was brought before Their Majesties, who noted her labors on behalf of events such as the Tournament of the White Hart and others in her group. In recognition of her acts of service, They were moved to name her a Companion of the Keystone. Scroll by Mistress Maria Christina de Cordoba.

Gremian Ulfhednar was next summoned to attend Their Majesties. Again, Their Majesties remarked on the service he provided to White Hart and other events, performing setup and cleanup alike. Being moved by reports of his dedication, Their Majesties saw fit to name him a Companion of the Order of the Keystone, thus Awarding him Arms. Scroll by Mistress Maria Christina de Cordoba.

Their Majesties called into Their presence Kismira Rothiem, and spoke with her of her work as reservations clerk and at the registration desk for Blackstone. In recognition of her service to the Barony, Their Majesties created her a Companion of the Keystone, further Awarding her Arms. Scroll by Master Caleb Reynolds. 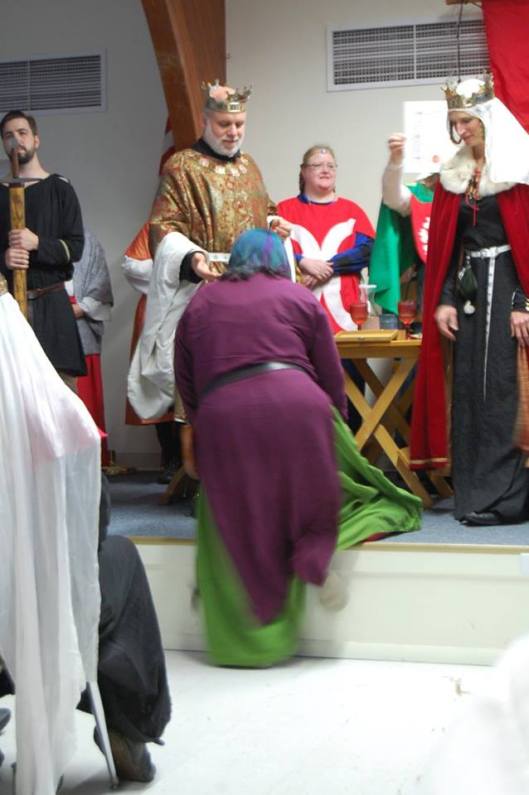 Their Majesties called for Tiberius of Sylvan Glen, who was also not in attendance. Once more, Dame Hrefna Úlfarvinnsdóttir came forward to carry Their words of praise to him, as well as Their wish to name him a Companion of the Silver Buccle. Scroll by Baroness Ekaterina Volkova.

Then was Lady Onora Inghean ui Donmhnaill asked to attend Their Majesties. Their Majesties praised this noble lady’s clothing and embroidery, including the clothes she was wearing at the time. Faced with the obvious evidence of her skills, and knowing the reports of her good works, Their Majesties saw fit to name her a Companion of the Sycamore. Scroll by Baroness Ekaterina Volkova.

Their Majesties next required The Honorable Lord Gareth Whytebull to enter Their presence. They spoke of His Lordship’s constant service to his Barony, region, and the fighting community as a whole. Mindful of the acclaim of others to this same accomplishment, Their Majesties called before Them Their Order of the Millrind and inducted him into its rolls. Scroll by Meisterin Fredeburg von Katzenellenbogen.

THL Gareth joins the Order of the Millrind. Photo by Master Alexandair O’Conchobhair

Before releasing the Order, Their Majesties called for Lady Odette D’Arques to attend Them.  This lady’s service as exchequer, cook, and housing coordinator were among the many reasons Their Majesties were moved to Grant her Arms and name her also a Companion of the Millrind. Scroll by Baroness Alexandra di Campagnella.

Lady Odette is inducted into the Millrind. Photo by Lady Àine ny Allane.

Her Majesty then spoke of the one who inspired Her on this day: Bear, who had newly authorized as a Thrown Weapons marshal. He had supplied the butts for the day’s range and spoken with Her Majesty of his plans to transform his estates into an archery and thrown weapons range for all. Her Majesty presented him with Her token in appreciation for the inspiration he provided.

Bear receives a token of inspiration from Her Majesty. Photo by Master Alexandair O’Conchobhair.

Their Majesties also thanked the event staff who made the day so enjoyable for all, and the cooks who provided food for Them despite additional restrictions and constraints governing Their Majesties’ diet on the day.

Their Majesties also thanked all scribes and regalia wrights who contributed their talents and largesse to enhance the Court’s proceedings. They further invited any and all who might take up the scribes’ pen to speak with or contact the Sylvan Signet, as the Scribes of Æthelmearc have particular need of reinforcements and wish to grow their community again.