The SCA 50 Year Celebration continues in the Middle Kingdom with a variety of activities. Thanks to Viscountess Hodierna Miriglee of Lincludin, who was the second Princess of Æthelmearc, and to THLady Rachel Dalicieux for their reports and photos!

Alas, rain on Tuesday and Wednesday caused the closure of some venues including archery and siege, but participants enjoyed many other activities in the many buildings and arenas available on the fairground site. There were crafts in the arts building including pottery, fiber arts, and block printing, as well as numerous children’s activities.

One record already set by the 50 Year Celebration is that it currently holds the largest gathering of equestrians in the history of the Known World. There were mounted combat tournaments and other competitions over the course of the week.

The Queens of the Known World participated in one particularly unusual equestrian competition. They were driven in horse-drawn chariots and had to complete tasks much as in normal equestrian competitions, knocking over artificial “enemies” with beanbags.  So of course the Æthelmearc contingent in the stands took the opportunity to cheer Queen Ariella on with chants of “Oh, No, Rock to the Face!” each time she struck a target. While our queen acquitted herself well, the winner of the competition was Queen Adrielle of Ealdormere.

One of the marvels on site was the “Great Machine.” Powered by dogs, it can do a variety of work. One of its creators, Master Sylard of Eagleshaven from Ealdormere, demonstrated using it to drive a Da Vinci Hammer and transform a bog iron bloom to iron that can be worked.

Sir Stefan Ulfkelsson of Æthelmearc also spent some time working bog iron at 50 Year, though without the benefit of the machine. Instead, he had assistants working a bellows to heat a charcoal fire so he could smelt the bog ore into iron using a Viking-era bloom forge. He reports that he was able to achieve about 25% efficiency of product in to iron out, which is very good for this technique. 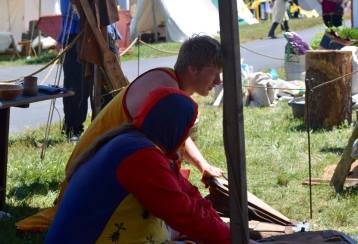 Assistants working the bellows at the forge. Photo by Master Fridrikr Tomasson. 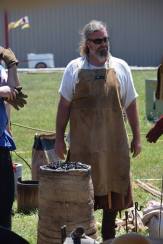 Other indoor activities have included a Boat Battle, a Squire’s Tournament, a Known World Hafla, and Children’s A&S Day.

Of interest to both scribes and bards, SCA 50 Year marked the unveiling of a book that was created by a group of over 50 Midrealm artisans in a project called “Calf to Codex.” Spearheaded by Master Johannes von Narrenstein, they began five years ago with deer that were butchered by hand and their hides processed into parchment. The parchment was then distributed to numerous scribes who painted and calligraphed the text using handmade oak gall ink and period pigments, and in some cases even handmade paint brushes and of course, quill pens. The text includes Midrealm history, stories, and songs written by a score of bards of the Middle, including such luminaries as Mistress Marian of Heatherdale, Duke Finvarr de Taahe, and Duke Laurelen Darksbane. Once complete, the parchment pages were gathered into quires, sewn together to form a book, and bound using hand-planed quarter-sawn oak panels and a tooled leather cover with handmade metal reinforcements and clasps. The threads used to sew the book together were made from flax grown, harvested, combed, and spun by members of the Society. Even the tools used to line the leather cover were hand-made. At SCA 50 Year, Master Johannes presented the 112-page book at a performance area where bards performed music and stories from it.

Master Johannes says of the book’s purpose: “It will be used like a book should be – read from, to us, at events and gatherings. We will have a custodian to take care of it, and invite readers to read to us from it.”

The photos below, by Viscountess Elashava bas Riva, are stunning. Gentles interested in a closer look at the project can learn more on the group’s Facebook page.

One of the more popular events of 50 Year was the “Founders Meet and Greet.” A group of five gentles who were present at the first tournament, including its hostess, Countess Diana Listmaker, told stories of the Society’s founding and early days and answered questions. They are undoubtedly the celebrities of the event and have graciously had their pictures taken with scores of people from all over the Known World.