Court Reports of the Kingdom of Æthelmearc

Documented from the Rolls and Files of the Coram Regibus of Thomas Byron et Ariella, Rex et Regina Æthelmearc: Being a True Record of the Business of Their Majesties’ Royal Court at the Siege of Glengary, September 3, AS LI, in the Shire of Sylvan Glen.  As recorded by Maestro Orlando di Bene del Vinta, with the assistance of THL Alianora Bronhulle and Gwendolyn the Graceful, Brehyres, Jewel of Æthelmearc Herald.

Their Majesties invited Their cousins from the Kingdom of Atlantia, Fergus and Glynis, Baron and Baroness of the Barony of Highland Foorde, to join Them in Their court.

Next, Their Majesties called for the children of Æthelmearc where They, and Princess Leah, bestowed upon them gifts and trinkets of amusement.

Having seen that the children were properly cared for, Their Majesties then summoned into Their Court the autocrat, Lady Laurentia of Caledonia, where upon They bid her share the reports of day’s events and activities. Lady Laurentia reported that the day’s thrown weapons tourney was won by Lord Kuma, the Arts and Sciences competition was won by Lady Samin, Maestro Orlando won the morning rapier tournament, and Lord Dromund won the rapier longsword tournament. THLord Tegrinus was the winner of the rattan tournament. The autocrat then thanked her staff, Their Majesties, and all who attended the event this day.

Next, Their Majesties gave leave to Fergus and Glynis to conduct business of their Court.

Their Majesties summoned Bertrand Martel and THL Ursula of Rouen presented herself on his behalf. Their Majesties and spoke of his skill in armored combat and thrown weapons, his efforts in creation of his own armor, and his assistance with demos. Being pleased with Their subject They did award him arms and raise him to the ranks of the nobility. Scroll by The Honorable Lady Rachel Dalicieux. 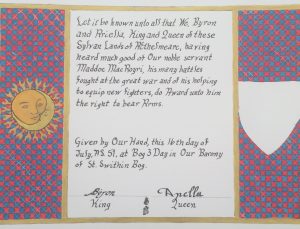 Their Majesties then called for Safia bint Da’ud Al’Zarqa. On her behalf, her husband Lord Dromund presented himself before The Throne. Speaking proudly of Safia’s labors as the arts & sciences officer and seneschal for the College of Silva Vulcani, Their Majesties did award her arms and name her Lady Safia. Scroll calligraphed by Baroness Ekaterina Volkova and illuminated by Anna Ianka Lisitsina. 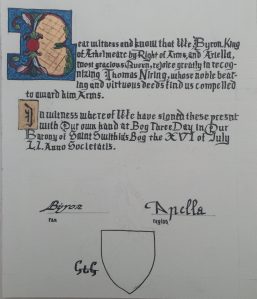 Next, Their Majesties wished to speak with Thomas Niring. Being not present, a member of the populace came forward on his behalf.

Their Majesties spoke of his virtuous deeds and of his craftsmanship in creating a full steel fighting harness.

Satisfied by the industriousness of Their subject saw fit to name him Lord by awarding him arms. 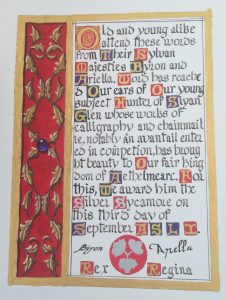 Their Majesties then, having heard of the passions of Hunter of Sylvan Glen did call him forward. He also being not present, his father presented himself before Their Majesties. Their Majesties shared knowledge of Hunter’s efforts in chainmail and the creation of an avantale that he entered into and arts & sciences competition. They spoke of his growing talent in the art of calligraphy. Being pleased with this youthful subject of Their kingdom did induct him into the Order of the Silver Sycamore. Calligraphy by Eilionora inghean an Bhaird and illumination by Eilionora inghean an Bhaird and THL Rachel Dalicieux.

Looking out over the populace gathered, Their Majesties spied Lord Dromund Geirhjalmson and once again bade him come forward. They hailed his prowess with rapier to Their Court. They spoke of his knowledge of the steel arts and talked of the longsword tournament this very day in which he emerged victorious over all other combatants. Well pleased with his prowess and skill did They name him a Companion of Golden Alce. Pyrography scroll by Maighstir Liam MacantSaoir.

Lord Leonardis Hebenstreit was inducted into the Order of the Golden Alce in absentia. Scroll by The Honorable Lady Eleanore Godwin. 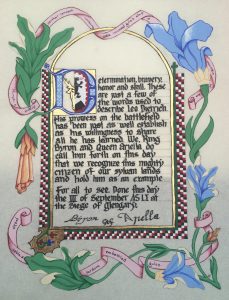 Leo Dietrich was created a Companion of the Golden Alce and Awarded Arms in absentia.  Scroll by Lord Angellino the Bookmaker. 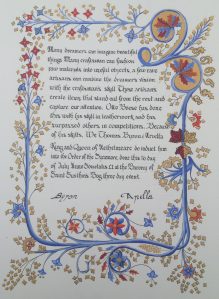 Lord Otto Boese was then called before Their Majesties and a member of the populace came forward of his behalf. They told Their Court of Lord Otto’s craftsmanship in leather, of his making of arming sword sheathes and period archery items. They also spoke of his win in the novice category at Ice Dragon for these same items. Their Majesties then inducted him into the Order of the Sycamore. Scroll by Mistress Antoinette de la Croix with text by The Honorable Lord Gunther Grunbaum.

Her Majesty then sought to be attended by Master Robert of Sugar Grove. She told of how She was pleased by his giving of himself that day; to spend four hours teaching a class and to work with the youth. She praised him for his selflessness and how his efforts lead to the enrichment of the kingdom. Thus, in the tradition of Queens before Her, She did name him Her inspiration and presented him with Her token.

Their Majesties recognized all those who contributed scrolls, medallions, and regalia for those recognized in Court this day. They thanked those who worked to make the event successful and those who had attended, and They thanked the Shire of Sylvan Glen for their generosity and hospitality.

There being no further business, the Coram Regibus was closed.