The Agincourt feast this year is based on the Canterbury Tales. I have taken a few liberties with the menu to ensure proper balance and variety of dishes. We will be doing a few things differently this time around and hope that you will enjoy the experience.

When you enter the hall, you will see that the tables have been arranged in a “U” formation. The Royalty will be seated at a table located at the bottom of the U. This is an approximation of what may be seen in medieval illuminations.

The tables will be covered in white linen and a small pitcher, bowl, and a linen towel will be placed every few feet. This is for handwashing prior to dinner.

In accordance with period practice, seating will be done by precedence. When you sign up for dinner, we are requesting that you provide your title to facilitate creating the final seating chart. 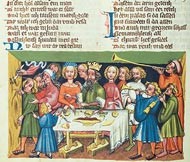 This is not something that we do often and there may be some concerns because it’s new to most people. When we organize the seating, we will be keeping families together so that small children are not seated separately from their parents. Seating by precedence gives you the opportunity to spend time with old friends and acquaintances as well as meeting new people and sharing a meal with them.

Because of the available seating in the hall, we will be seating people both on the inside and outside of the tables. It will look something like this:

A herald will announce the diners, including High Table. As each person is announced, she or he will then be lead to their seats by a server. Once everyone is seated, diners are encouraged to take advantage of the water, pitcher, and towel to wash their hands before dining. Handwashing before a meal was done before feasts during our period of study in order to assure their fellow diners that their hands were clean (diners were expected to come to the table with hands and nails clean). Handwashing would often be done at a separate basin or the pitcher and basin would be brought to each guest in turn based on his or her rank.

To make water for washing hands at the table. Boil sage, strain the water and let cool to a little more than tepid. Or take camomille and marjoram in stead [of sage], or rosemary, and boil with orange peel. Bay leaves are also good.

Once handwashing is complete, the feast will commence.

Before each course, there will be a reading from the Canterbury Tales. The reading will be from the introductory poem for the character whose tale the course is based upon. This is entirely done for time considerations.

Here Begynneth the Book of the tales of Caunterbury

When April with his showers sweet with fruit

The drought of March has pierced unto the root

And bathed each vein with liquor that has power

To generate therein and sire the flower;

When Zephyr also has, with his sweet breath,

Quickened again, in every holt and heath,

The tender shoots and buds, and the young sun

Into the Ram one half his course has run,

And many little birds make melody

That sleep through all the night with open eye

(So Nature pricks them on to ramp and rage)-

Then do folk long to go on pilgrimage,

And palmers to go seeking out strange strands,

And specially from every shire’s end

Of England they to Canterbury wend,

The holy blessed martyr there to seek

Who helped them when they lay so ill and weal

Befell that, in that season, on a day

In Southwark, at the Tabard, as I lay

Ready to start upon my pilgrimage

To Canterbury, full of devout homage,

There came at nightfall to that hostelry

Some nine and twenty in a company

Of sundry persons who had chanced to fall

In fellowship, and pilgrims were they all

That toward Canterbury town would ride.

The rooms and stables spacious were and wide,

And well we there were eased, and of the best.

And briefly, when the sun had gone to rest,

So had I spoken with them, every one,

That I was of their fellowship anon,

And made agreement that we’d early rise

To take the road, as you I will apprise.

But none the less, whilst I have time and space,

Before yet farther in this tale I pace,

It seems to me accordant with reason

To inform you of the state of every one

Of all of these, as it appeared to me,

And who they were, and what was their degree,

And even how arrayed there at the inn

And with a knight thus will I first begin.

There was a franklin in his company;

White was his beard as is the white daisy.

He loved right well his morning sop in wine.

For he was Epicurus’ very son,

That held opinion that a full delight

Was true felicity, perfect and right.

A householder, and that a great, was he;

Saint Julian he was in his own country.

His bread and ale were always right well done;

A man with better cellars there was none.

Baked meat was never wanting in his house,

Of fish and flesh, and that so plenteous

It seemed to snow therein both food and drink

Of every dainty that a man could think.

According to the season of the year

He changed his diet and his means of cheer.

Full many a fattened partridge did he mew,

And many a bream and pike in fish-pond too.

Woe to his cook, except the sauces were

Poignant and sharp, and ready all his gear.

His table, waiting in his hall alway,

At county sessions was he lord and sire,

And often acted as a knight of shire.

A dagger and a trinket-bag of silk

Hung from his girdle, white as morning milk.

He had been sheriff and been auditor;

And nowhere was a worthier vavasor.

A cook they had with them, just for the nonce,

To boil the chickens with the marrow-bones,

And flavour tartly and with galingale.

Well could he tell a draught of London ale.

And he could roast and seethe and broil and fry,

And make a good thick soup, and bake a pie.

But very ill it was, it seemed to me,

That on his shin a deadly sore had he;

For sweet blanc-mange, he made it with the best.

Barley Water: Since we can’t provide ale and no alcohol is allowed on site

Bread: Locally made white bread. A gluten-free bread will be available.

Hennys in bruet: Chicken and pork with salt, pepper, and cumin colored with saffron.

“A buckler he had made him of a cake”

There was a manciple from an inn of court,

To learn the art of buying food and drink;

For whether he paid cash or not, I think

That he so knew the markets, when to buy,

He never found himself left high and dry.

Now is it not of God a full fair grace

That such a vulgar man has wit to pace

The wisdom of a crowd of learned men?

Of masters had he more than three times ten,

Who were in law expert and curious;

Whereof there were a dozen in that house

Fit to be stewards of both rent and land

Of any lord in England who would stand

Upon his own and live in manner good,

In honour, debtless (save his head were wood),

These men were able to have helped a shire

Sawce madame: A sauce with a chicken broth base flavored with quince, pears, garlic, grapes, galingale, and poudre douce.

Tart de Bry: A tart of eggs, cheese, sugar, saffron, salt, and ginger. A gluten-free version of this dish will be available.

The miller was a stout churl, be it known,

Which was well proved, for when he went on lam

At wrestling, never failed he of the ram.

He was a chunky fellow, broad of build;

He’d heave a door from hinges if he willed,

Or break it through, by running, with his head.

His beard, as any sow or fox, was red,

And broad it was as if it were a spade.

Upon the coping of his nose he had

A wart, and thereon stood a tuft of hairs,

Red as the bristles in an old sow’s ears;

His nostrils they were black and very wide.

A sword and buckler bore he by his side.

His mouth was like a furnace door for size.

He was a jester and could poetize,

But mostly all of sin and ribaldries.

He could steal corn and full thrice charge his fees;

And yet he had a thumb of gold, begad.

A white coat and blue hood he wore, this lad.

A bagpipe he could blow well, be it known,

And with that same he brought us out of town.

‘Spiced Ale’: Because of the alcohol-free site, we will be serving spiced apple cider.

Wafers: Thin cookies made in an iron. A gluten-free option will be available.

The Barony-Marche of the Debatable Lands will host Agincourt Friday, October 28 to Sunday, October 30. See the Barony’s website for the event announcement.

2 thoughts on “Agincourt Feast Will Be A Canterbury Tales Experience”