All photos courtesy of Lady Elektra of Sylvan Glen.

Documented from the Scrolls of the Reign of Marcus & Margerite, King and Queen of Æthelmearc: the Business of Her Majesty at Sylvan Glen Twelfth Night, February 4th, Anno Societatis LI, in the Shire of Sylvan Glen. As recorded by Maestro Orlando di Bene del Vinta, Jewel of Æthelmearc Herald.

Her Majesty invited the youth known as Thomas Bronhulle, the event’s King of Misrule, to join Her in Her court.

Her Majesty called for Tiberius of Sylvan Glen, the day’s co-autocrat, who made several announcements, offered thanks for those in attendance and for those who provided support and service, and also announced the winners from the day’s varied competitions. However, at the conclusion of his announcement, Her Royal Majesty bade Tiberius linger a moment longer. She spoke of his leadership and service to his shire and offered Her praise for his excellent efforts as first time co-autocrat alongside his mother, Lady Reina Dulcedame. Thus, She did Award him Arms and raise him to the ranks of the nobility. Scroll forthcoming. 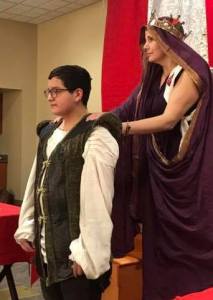 Next, Her Majesty called for Niño of Sylvan Glen and thanked him for all of his helpfulness and service, despite his young age and small size, and She did bestow upon him a Silver Buccle. Scroll forthcoming.

Lord Daniel Rufus was next called before the Sylvan Throne, and his wife Lady Eleanor of Pembroke came forward in his stead. Her Majesty spoke of the courtesy, kindness, and chivalry displayed by Lord Rufus, and that these are values that are highly prized by the Society, and thus She did bestow upon him a Cornelian. Scroll forthcoming. 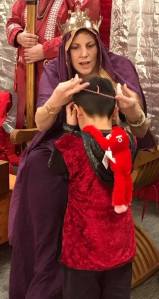 However, Her Majesty stated that Her business was not yet complete with Lady Samin, and reiterated that She had indeed received many words of praise of Lady Samin. Her Majesty told of the reports of Samin’s artistry, and that Her Majesty had witnessed Samin’s skill this very day when viewing the A&S display where several works of art with accompanying documentation by Lady Samin could be viewed. Thus, Her Majesty was moved to induct Lady Samin into the Order of Sycamore. Scroll forthcoming. 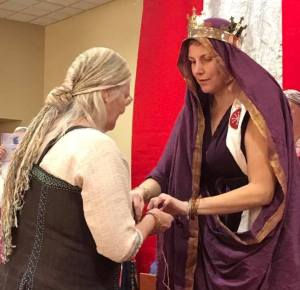 THLady Etain Eame was next called to attend Her Majesty. Her Ladyship’s years of quite service to her shire and to the kingdom as autocrat, head cook, seneschal, head tollner, kingdom NMS secretary, and more were noted. Seeing these years of service could not go unrecognized, Her Majesty called forth the Order of the Millrind, and inducted THLady Etain into that Order. Scroll forthcoming.

Next, Her Majesty invited forward all children. She noted to the King of Misrule that earlier in the day he used Her herald for his court, and so in return, She asked His Majesty Misrule to carry the chest of toys for Her so that the children might select a gift.

Her Majesty then called forward Lord Arthur of Linden from the Kingdom of Atlantia. She spoke of his A&S entry and how impressive was his detail and skill, and so named him Her Inspiration and bestowed upon him a Golden Escarbuncle.

There being no further business, this court of Her Majesty was closed.