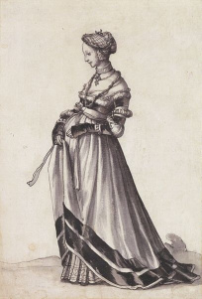 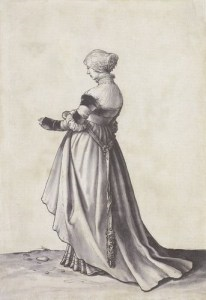 Several months ago, I finally put scissors to fabric and began putting together an early 16th century German dress. I’d been researching for some time, but it took a lot of mental preparation to work myself up to the idea of constructing a late-period garment on my own. For this dress, I drew inspiration primarily from two Hans Holbein sketches of a Basel woman from 1523. 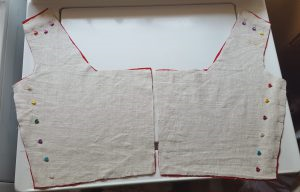 I began with my own measurements and looking at patterns from both Katafalk and Reconstructing History, but found that neither really worked for my body. So I ended up fitting myself and making my own, which was a long and infuriating process — next time I’m having a friend help me fit a new pattern. 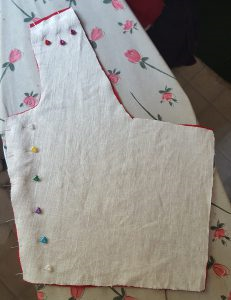 When I finished my bodice pattern (which was slightly modified after these photos), I cut an interlining of heavy linen and the wool shell, then attached them mostly following Katafalk’s tutorial. I cut the guards out of black wool and attached them after the bodice was all put together, then moved onto the skirt.

Using Mistress Genoveva’s Rolled Pleat Calculator, I came up with the length needed for my skirt, which I think was about 6 yards. I had a whole bolt of red wool from JoAnn Fabrics, and I only used a half-width of the fabric for the top portion of the skirt. I spent several hours with a ruler and chalk, and by the end of it I had my skirt pleated. 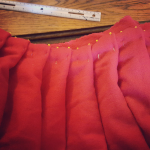 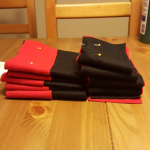 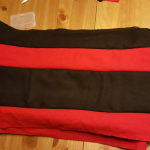 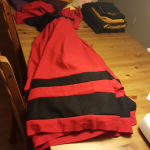 I ended up piecing the bottom stripes together in three panels of stripes, then sewed them together and attached them. Next time, I’ll likely attach the stripes before I pleat the skirt, but it didn’t create any major inconveniences doing it the other way.

It was after I completed the skirt that I started running out of time leading up to Fall Coronation of Marcus and Margerite, so I decided to put my plans for the sleeves on the back burner — it would be easy enough to take the middle-class route and simply sew the exaggerated stitching at the joints over the chemise. The proper chemise also wasn’t going to happen in time, so I pulled a cheater shirt out for the event.

The last piece of the outfit that I could accomplish in time was the hemd and steuchlein, which I made following Katafalk’s tutorials. The hemd was even more difficult to fit by myself than the bodice pattern was, and I was extremely glad to cover it and all the mistakes I made on it with the steuchlein.

There weren’t a great deal of photos of the good-enough dress I took to the event, but I was pretty pleased with it. I’m currently working on the more-correct sleeves, a pleated chemise, and fixing some general mistakes on the dress. Ideally, there will also be a structured linen kirtle to go under this dress and over the chemise.

See Astridr’s blog here for more of her sewing and culinary adventures.