This is a story about an alternate universe, where the Squire’s Revolt of A.S. 51 succeeded. Was it utopia or chaos? It depends on your point of view. 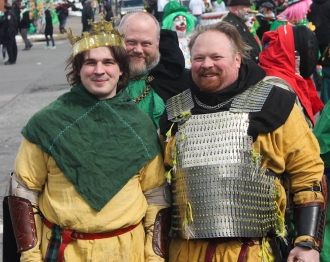 After the surprise success of the Squire’s Revolt that began in the fall of A.S. 51, Lord Láegaire Mac Conaill Meic Shiadahail has really shaken things up as the new King for Life. Lord Cormacc mac Ghille Brigde and Sir Murdoch Bayne helped place him on the throne with the assistance of Lady Elena de la Palma’s sleeping potions (discreetly added to Their Previous Majesties’ and Highnesses’ tea during 12th Night court). Once asleep, former King Marcus and Queen Margerite were gagged, bound, and together with their daughter, placed on a boat headed for sanctuary in the Barony of Nordmark, Kingdom of Drachenwald, with Jewel Herald Maestro Orlando di Bene del Vinta at their side. As the galleon set sail, ex-King Marcus was heard shouting, “Jag kommer sänka dig, ditt otacksamma kräk!”* Meanwhile, Prince Timothy and Princess Gabrielle have fled to Atlantia, as all 147 of His Highness’s squires flocked to King Láegaire’s banner.

Asked what prompted the revolt, King “Roo-Roo” Láegaire rolled his eyes and said “It was the children. The beatings, the lousy food (I mean, really, you can only eat so many Swedish fish), the sleeping on the floor, even the crouching in the back of the wain beside the Dread Empress Ingrid for miles, that I could take. I didn’t even complain when King Marcus refused to share his cigars. But when Marcus and Margerite had the children chase me while I ran with the chest of toys, with scant seconds of lead time until they arrived to tear me limb from limb – it was a horror show! I had to rid the land of those tyrants!”

King Láegaire has retained his consort, the eternally bemused Lady (now Queen) Mara of Hartstone, who seems to have busied herself trying to keep the Kingdom from falling into complete disarray under his benevolent rule.

Among his many controversial rulings, King Láegaire’s rearranging of the Order of Precedence, making the Order of the Silver Buccle the highest award in the Realm, has elevated Master Will Parris to the senior non-royal peer in Æthelmearc. Master Will expressed some surprise at his new status, noting that it had been so long since he was inducted into the Silver Buccle that he’d kind of forgotten about it. When King Láegaire was asked why he would elevate a children’s order to such heights when it was rampaging children that inspired his rebellion, His Majesty only muttered incoherently about blackmail.

In addition, some have contested the King’s creation of a new peerage, claiming only the BoD has that power, but the number of gentles in the Order of the Bromance continues to grow. It is bestowed on those who show true dedication to “bromance” (regardless of gender; bromance is gender-neutral, after all) and bromantic pairs are often elevated together, further breaking tradition.

Resistance against the rule of King “Roo-Roo” Láegaire has coalesced around Duke Maynard von dem Steine, who believes he can bring King Láegaire down through proof of tax evasion. “He just has too many ducats to be the humble squire he claims to be,” said His Grace. Master Tofi Kerthjalfadsson, Kingdom Exchequer, agrees and is said to be combing Kingdom records for proof of the usurper’s criminal activities.

Baroness Beatrix Krieger receiving her Writ for the Chivalry at AEdult Swim. Were nefarious thoughts running through her mind? Photo by Lady Aine ny Allane.

Meanwhile, the kingdom waits with bated breath to hear what Baroness Beatrix Krieger will do. Her rumored collaboration with the rebellion may make her planned elevation into the Order of the Chivalry this Pennsic a trifle… awkward

Co-conspirator Lord Christian Goldenlok was forced to flee his homeland of Misty Highlands to avoid the wrath of his Knight, Sir Gareth Kincaid. He and his wife, Lady Adelyn Idesborn, have taken up residence in the Canton of Steltonwald, where they are hiding out until the birth of their firstborn child. Lord Christian is said to have plans – though whether to support or overthrow King Láegaire is unknown.

While there was some thought that the Curia would invalidate His Majesty’s usurpation liberation of Æthelmearc, his legion of squires and squire wannabees has proven too formidable a force. One of the ringleaders in the squire wannabee contingent, Lord Robert MacEwin of Thornhill, has been named His Majesty’s Royal Enforcer, with occasionally tragic results as Lord Robert cannot seem to decide whether to skewer his victims with a rapier or knock them unconscious (or worse) with a rattan sword.

Lady Elena de la Palma looks innocent, but what brew is in the cup she offers the Crown? Photo by Mistress Felicitas Flussmüllerin.

Rumors say that a coordinated invasion from the East and Middle is imminent, as their Princes intend to restore the rightful monarchy… or, perhaps, split Æthelmearc between them, unless Prince Timothy can muster sufficient forces from Atlantia to stop them as well as the usurper. King “Roo-Roo” Láegaire vows a vigorous defense, though how he will accomplish that without help from any of the chivalry except his Rasputin, Sir Murdoch, is anyone’s guess. In the mean time, he has taken the precaution of having one of his close retainers taste any potables offered by Lady Elena.

*  Swedish for “I will take you down, you ungrateful wretch!”