From the Scrolls of the Reign of Timothy and  Gabrielle, King and Queen of Æthelmearc , as recorded by Dame Kateryna ty Isaf, Jewel of Æthelmearc Herald with the assistance of THL Aindreas mac Ghille Fhionntaigh a’Ghaoithe Airgid, Nithgaard Herald at The Arts & Sciences Faire and Queen’s Prize Tourney in the Shire of Nithgaard on May 6, Anno Societatis LII.

The Court of Her Majesty Queen Gabrielle was opened.

Her Majesty called the children present before Her and ensuring they knew the rules, unleashed them upon Tassin Treseol with the ritual chase of the toy chest.

The children preparing to chase the toy box. Photo by Lady Mary Christina Lowe, aka Jinx.

Her Majesty asked that all pay head as Tetsutaka noh Tora was Awarded Arms in absentia on this day for his archery skill and service in helping with the ranges. The scroll is a work in progress limned by Lady Viviene of Yardley.

Her Majesty called forth Aurelie of Nithgaard. For her skill in embroidery and service as Deputy Chatelaine for the Shire of Nithgaard as well as her work at events, Their Majesties Awarded her Arms and made her a Lady of the court. The scroll was created by the hand of THLady Eleanor Godwin. 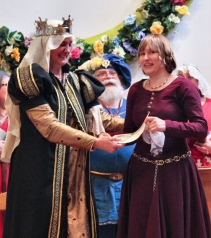 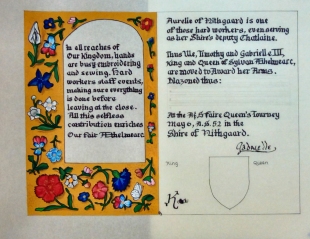 Her Majesty called Lady Elena de la Palma before Her. Lady Elena thanked the staff of the event and especially the cook, tollners, and set up and breakdown crew from Nithgaard for all their help ensuring the day went so smoothly.

Lady Elena, the autocrat, addresses the populace. Photo by Jinx.

Her Majesty invited before Her Baroness Orianna and Baron Fredrikr to discuss the Arts and Sciences Faire of the day. Their Excellencies were pleased to advise Her Majesty and the court that there were 22 entrants on this day, and thanked all artisans, sponsors, and advisers for their participation. As is the custom of the Faire, each artisan and sponsor came before the court where the sponsor presented a gift to their artisan to encourage their continued endeavors.

Artisans receiving gifts from their sponsors and advisors. All photos by Jinx.

The final gift of the Arts and Sciences Faire was presented to Lord Bjorn Bjorklund and Lady Theresa du Domremy. Theresa’s sister, Mistress Jeanmaire du Domremy, presented both with a pair of coronets made with pearls from Theresa’s grandmother’s necklace. Her Majesty advised them that this was at His Majesty and Her Majesty’s express request, as They felt this was a gift worthy of the two. The pair were made Baron and Baroness of the Æthelmearc Court.

His Majesty sent words from Cathay to both Baron Bjorn and Baroness Theresa thanking them for their hand in raising the young man he was so long ago. He advised that it has been His wish to be the model of chivalry and generosity that they showed Him and to pay forward their gift.

Her Majesty called forth Lady Abigail Kelhoge. Commending the Lady for her exceptional knowledge and skill in clothing, Her Majesty asked that the Order of the Fleur d’ Æthelmearc attend Her. Her Majesty granted Arms to THLady Abigail Kelhoge and bid Her Order to welcome their newest member. The scroll was the work of Mistress Gillian Llwelyn.

Lady Abigail is admitted to the Fleur d’Æthelmearc. Photo by Jinx.

Her Majesty asked that all scribes please stand to be acknowledged for their continued contributions to the Kingdom.

Her Majesty then called forth Lord Robert of Ferness to advise him that he had been Her Majesties choice for the Queen’s Prize Tourney and that his work on the shoes for his daughters moved Her Majesty to make him Her inspiration for the day and award him the Golden Escarbuncle. 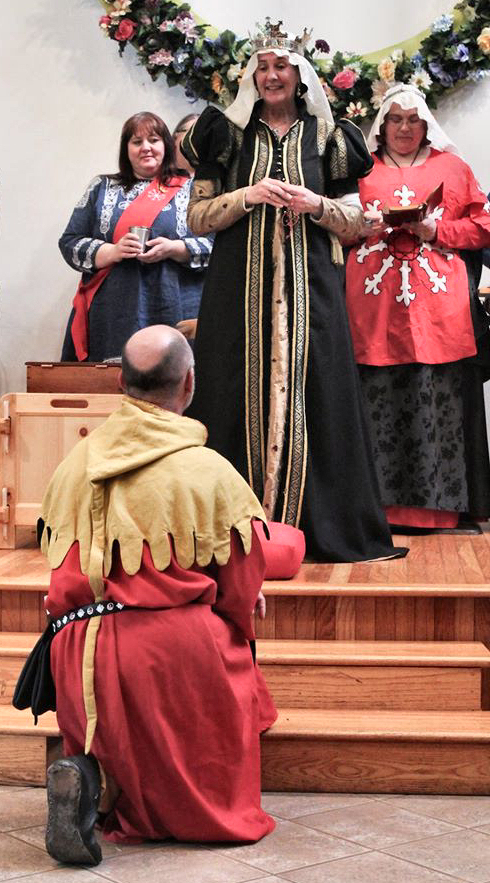 There being no further business, the court of Her Majesty was closed.