Blackstone Mountain, Under the Grenewode

From the Scrolls of the Reign of Timothy and Gabrielle, King and Queen of  Æthelmearc, as recorded by Dame Kateryna ty Isaf, Jewel of AEthelmearc Herald as conducted by Lord Arias Beltran del valle at Under the Grenewode hosted jointly by the Barony of Blackstone Mountain and the Shire of Port Oasis on August 26, Anno Societatis LII.

Their Majesties called for Lord Sasson della Sancta Victoria to speak about the Arts and Sciences competition that had gone on throughout the day. In this competition, while all submissions were praised for their craftsmanship, two gentles did rise above to earn recognition. Lady Katarina of Twin Moons was named both the choice of the Populace and Their Excellencies of Blackstone Mountain for her blackwork chessboard, and Baroness Cerridwen de Skene was named Royal Choice and Heir’s Choice for her wool embroidery and silverpoint. 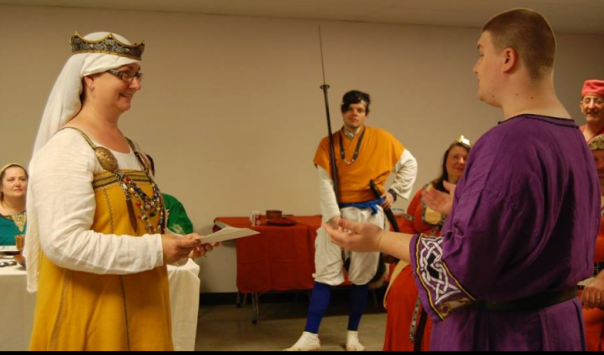 Their Majesties then gave Lord Sasson a different task: to convey the children’s toy chest from Their presence for the children of the Kingdom to begin their search. After allowing Lord Sasson the traditional head-start, the children were then sent to find him and receive a toy from those offered.

Their Majesties called for Their subject Rhiannon Borror to appear before Them. They noted this gentle’s long history of service to the kingdom as chatelaine and demo coordinator, and for this were They were moved to award her Arms and create her a Lady of their Court. 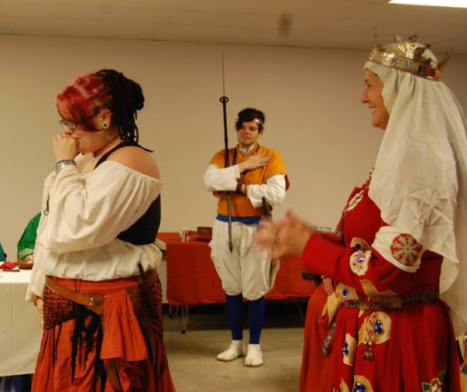 Lady Aine ny Allane was next summoned to Their presence. Lady Aine had shown herself to be a presence at many events, recording the events of those she attends in picture form for those who could not be there themselves, and giving of her time to make sure the work of the Kingdom and Society is done and done well. For this did They induct her into Their Order of the Keystone. The scroll is a work in progress. 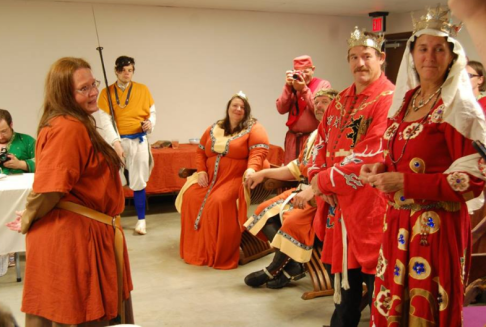 Their Majesties next demanded the presence of Lady Katharine McClung before Them. They spoke of this Lady’s long history of serving her Kingdom and Barony as a scribe and more recently as Onyx Pursuivant and Millrind Herald. Believing her work to be worthy of greater renown, They did then summon Their Order of the Millrind, and bid her join the ranks of the Order as its newest member. The scroll was created by Lady Juliana Ravenshaw. 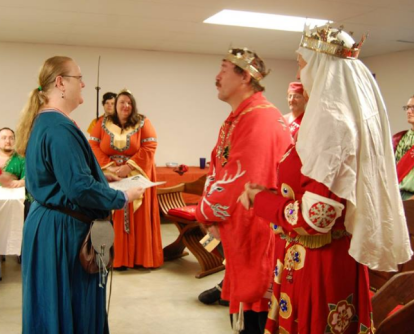 Their Majesties bade the Order to stay a moment longer as Their business with them was not yet finished. They invited Maestro Orlando di Bene del Vinta to attend Them as well. Citing his service to the kingdom as a vocal  herald, as the Jewel of Æthelmearc Herald to Their Royal Parents, and as a leader in the organization of Their fencing army, They did also name him to a place in Their Order of the Millrind. The scroll was created by Lord Sasson della Sancta Victoria. 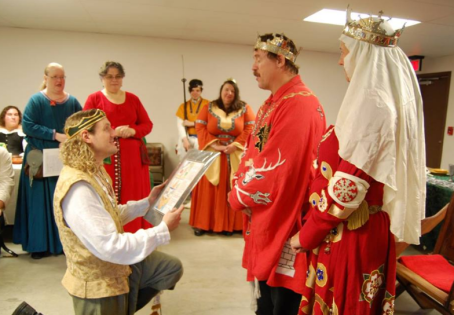 Next did Their Majesties summon Lord James Freeman to Their presence. Having succumbed to the exertions of the day in organizing certain activities, he was sent for. While the court waited, Their Majesties asked his mother to come forward that They might praise her for having raised such a hard working son and so that They might confound said son to the merriment of all. Once he appeared at speed, Her Majesty named him Her Inspiration for the day and bestowed upon him a Golden Escarbuncle, for She had seen the fruits of his labors throughout the day and noted the success
of the tournament format in entertaining the populace. 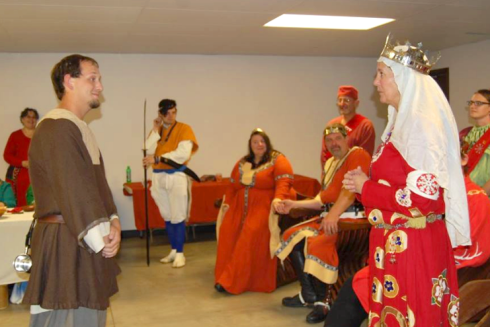 Their Majesties then invited all those present whose work had contributed to a scroll handed out on the day to rise and be recognized by the populace.

There being no further business before Their Majesties, Their court was then closed.