Here begins the Record of the Reign of Gareth and Juliana, King and Queen of Sylvan Æthelmearc upon the Day of Their Coronation, September 16, AS 52, in Their Shire of Ballachlagan; as recorded by Lord Arias Beltran del Valle, Jewel of Æthelmearc Herald, with the assistance and support of THL Sophie Davenport, Silver Buccle Herald, and Mistress Ekaterina Volkova, Ice Dragon Pursuivant.

In Their First Court in the morning:

Having ascended to the Throne, His Majesty Gareth called for his lady, Her Highness Juliana Delamere to attend him. Hearing her desire and confirmation to stand with him as Queen, He took the Consort’s Crown from the custody of Silver Buccle and placed it on Her head, creating Her as Her Majesty Queen Juliana Delamere of Æthelmearc. 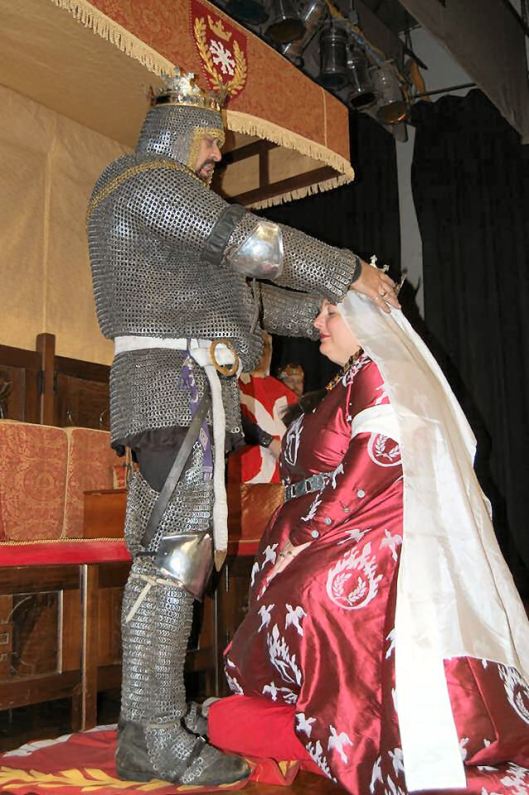 Upon Her ascension to the Throne, the Choir of the Barony-Marche of the Debatable Lands sang the lineage of the Sylvan Throne.

Their Majesties summoned Lord Arias Beltran del Valle before Them, and upon swearing an oath of service to Silver Buccle, he swore fealty and service to Their Majesties who then installed him as Their Jewel of Æthelmearc Herald.

Their Majesties then invited the recently-retired Duke Timothy of Arindale and Duchess Gabrielle van Nijenrode to return before Them. Their Majesties thanked them for their tireless service during their reign and confirmed their station as Duke and Duchess of the Society. Scrolls confirming their station were done by the hand of Mistress Ekaterina Volkova and Her Ladyship Vivienne of Yardley.

Their Majesties then bid them remain for a moment longer. They noted that although their Graces had served six reigns across three kingdoms, half of those had been while seated in the Sylvan Thrones, and it was their desire for all to know that the Kingdom now claims them as its own. Each were granted an Augmentation of Arms as a sign of their honored place in the Kingdom of Æthelmearc. Scrolls by Isabella Montoya and Lady Umm Samin bint Asad al-Isfahaniyya. 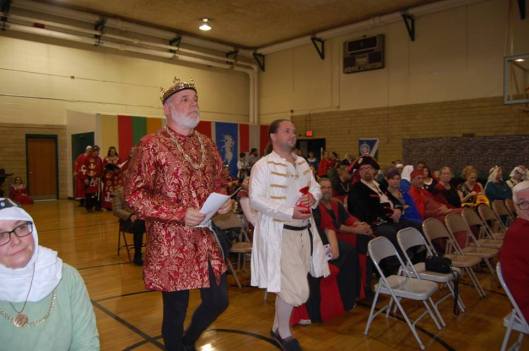 The Great Officers of the Kingdom were then called before Their Majesties and offered their oaths of fealty to Them.

Their Majesties next summoned before them Lady Raven Whitehart, who gave an oath of service and fealty as Head Retainer on behalf of those who wished to serve Their Majesties as retainers during Their reign.

The First Court of Their Majesties was then suspended.

Later in the morning:

The First Court of Their Majesties was resumed to read the following pieces of business:

On September 16, 2017, We, Gareth and Juliana, King and Queen of Æthelmearc, expel Derek Holton, known in the Society as Bluestar, from participation in any SCA activity.

On September 16, 2017, We, Gareth and Juliana, King and Queen of Æthelmearc, expel James Henry Shaffer IV, known in the Society as Cadan Buri, from participation in any SCA activity.

On September 16, 2017, We, Gareth and Juliana, King and Queen of Æthelmearc, expel Justus Clay Pease from participation in any SCA activity.

The First Court of Their Majesties was then suspended until the afternoon.

Later in the afternoon, upon the Sylvan Thrones:

Their Majesties next invited Count Jehan de la Marche before them to receive his personal oath of fealty.

Their Majesties then called for Lady Aine O’Muirgheason to attend them. They named her Their Ambassador to the East Kingdom, and sent her forth to bear Their words to Their cousins in the Eastern lands.

Lady Aine is named Ambassador to the East

Their Majesties summoned before Them Master Jussie Laplein. Having bested a field of fighters earlier in the day, they named him Heavy Weapons Champion and invited him to take his place in Their Court.

The Majesties once again called forth Skjoldr Skotandi. Since a young age, Skjoldr has willingly and happily provided service to his house, and supported the Kingdom by bearing water for all who need it at the great Pennsic War. His passion encouraged his father and brother to join as well. Having recently been made a citizen of Æthelmearc, Their Majesties created him a Lord of Their Court and awarded him Arms. Scroll by THL Zofia Kowalewska.

Their Majesties summoned Robeke von Heidelberg before them. Their Majesties noted his continued service after following the footsteps of his son Lord Skjoldr in joining the Society, providing battlefield support, and helping to repair the arms and armor to keep the Army of Æthelmearc well-equipped and safe. For these reasons was he awarded Arms and made a Lord of Their Court. Scroll by Felice de Thornton.

Their Majesties next summoned before them Ysabel le Croix. Ysabel has served Their Majesties house for years as waterbearer at Pennsic War and at Blackstone Raids, where she also offered the same to allies of Æthelmearc to keep them safe and nourished to challenge the enemies of the Kingdom. So did They see fit to name her a Lady in Their Court, and did award her Arms. Scroll by Felice de Thornton with words by Lord Arias Beltran del Valle. 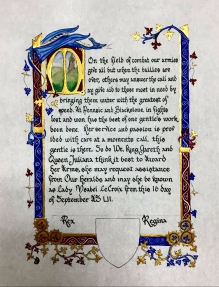 Wren of Sable Maul was then called forth by Their Majesties. As a fighter in House Sable Maul, Wren has overcome serious physical challenges and disabilities beyond those faced by most her age to provide her faithful service not only as a waterbearer, but also as an archer in the Army of the Kingdom. For her strength and commitment did Their Majesties deem her worthy of the position of Lady of Their Court and awarded her Arms. Scroll by Count Sir Jehan de la Marche and THL Ismay Ponde with words by Lord Arias Beltran del Valle.

Rikardr in blakki Bjarn was then summoned before Their Majesties. In only a few short years in the Society, Rikardr has offered his service, becoming a marshal for thrown weapons and helping with the range at Pennsic. Their Majesties also thanked him for providing the big, soft butts (for thrown weapons) so essential to practice in the Kingdom. For this did they award him Arms and make him a Lord of Their Court. Scroll by Felice de Thornton.

Their Majesties then gave Lord Rikardr his first task as a member of Their Court, sending him forth to bring his lady, Birna Rickardskona inn blakki Bjarn. In like fashion to her Lord has Birna become active in the society, clothing and feeding her House, bearing water on the field, and assisting at events with Troll. Therefore did they name her a Lady of Their Court, awarding her Arms. Scroll by Felice de Thornton. 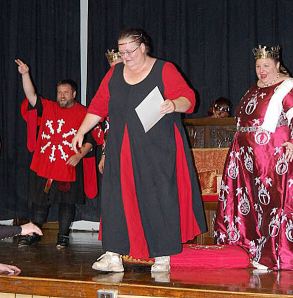 Their Majesties then invited before them Syr Tegrinus de Rhina. Their attention having been drawn to one amongst their guards who had thus far dodged the responsibilities of a position in their Court, They sent him and others of Their guard to bear forth Atrox to answer for his dereliction of duty, who shortly brought him before Their Majesties. As he had recently become a citizen of Their Realm he was no longer able to hide from those responsibilities, and for his many years of service to the kingdom army as a heavy fighter, They named him a member of Their Order of the Golden Alce, carrying with it an Award of Arms. Scroll by Lady Lyse Gunther with words by Lord Arias Beltran del Valle.

Their Majesties then summoned the Autocrat for Their Coronation, Lady Juliana Ravenshaw. Having noted her successful execution of Their Coronation day, Their Majesties also called the attention of the populace to her decades-long history of service as seneschal, creating garb, serving in kitchens, and helping to found Their Shire of Ballachlagan. For her devotion to the Kingdom was she given a Grant of Arms. Scroll by Lady Shirin of Susa.

Sir Vladisla Nikulich spoke for the Order of Chivalry on Rynea’s qualities of humility, courage and prowess in her activities. Meesteres Odriana vander Brugghe spoke for the Order of the Laurel on her skills in the kitchen, preparing food for the kingdom. Viscount Bear the Wallsbane spoke as a Royal Peer for the love of the Kingdom. Master Anias Fenne spoke for the Order of Defense about the grace she displays in her actions serving the kingdom. THL Otillige Rappoltsweiler spoke for the Populace also about her love, but this time for the Society itself. Sir Gabriel Hawkes then spoke about the inspiration she provides as an example to those looking upon her works. Finally, Viscountess Judith of Kirtland spoke as a Pelican about her time and efforts in teaching her craft, and the learning provided to others in that process.

Baroness Rynea is elevated to the Order of the Pelican

Having heard words from Their Orders, and been satisfied by them, Their Majesties then called for articles representing her new status. She was then presented with a medallion, cloak and crop to adorn her person and display her status. All this having been done, Their Majesties then accepted her oath to the kingdom and proclaimed her a Mistress of the Pelican. Scroll by THL Eleanor Godwin.

Their Majesties then invited forth Mistress Maria Cristina de Cordoba. Their Majesties spoke to Mistress Maria about her tireless work as a Mistress of the Lists, helping guide many newcomers to the Society and leading her local group and region in various capacities. For these reasons among others from her more than 25 years of service to the Society were They minded to create her a Baroness of Their Court. Scroll by Lady McKenna Henderson.

Mistress Maria Christina is made a Court Baroness

Her Majesty Juliana then called for Baroness Sybilla Detwyller to attend, and named Her Excellency as her Inspiration for the day and awarded her a Golden Escarbuncle.

Their Majesties then asked those who were involved in the creation of the various scrolls awarded in Their Court to stand and be recognized by the populace. They also thanked those responsible for the creation of the garb They had worn that day, including Mistress Elisabeth Johanna von Flossenburg, Lady Aine ny Allane, and Lady Birna Rickardskona in blakki bjarn, with belts and other hardware created by the hand of His Majesty Himself.

There being no further business before Their Majesties, Their Court was thus suspended.

At feast later the same evening:

Their Majesties summoned from his seat at Feast Ogier of the Black Corsairs. For 20 years has Ogier fought for the Kingdom, teaching new fighters and helping to equip them for battle. For these reasons did Their Majesties see fit to induct him into the Order of the Golden Alce. Scroll by THLady Rachel Dalicieux. 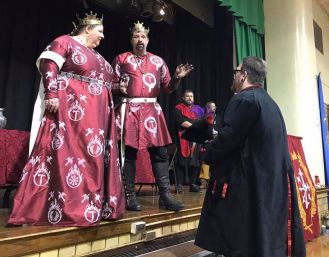 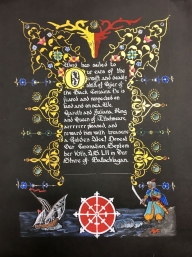 There being no further business, the First Court of Their Majesties was then closed.