On Saturday, October 28, Æthelmearc lost a loyal and hardworking servant of the Crown. Maestro Augusto Giuseppe da San Donato, also known as “Joe the Just,” passed away after complications from surgery.

Maestro Giuseppe started attending SCA functions in 1999 in the Barony of the Rhydderich Hael (greater Buffalo, NY), and made it to his first event in 2000.  He quickly jumped into the Society with both feet and became a pillar of his Barony and the Kingdom.

Giuseppe recieved a Pelican in 2012 for his many works, especially autocratting events, running thrown weapons lists, and holding offices from Canton to Kingdom level. If you needed something built, hauled, or organized, he was your guy. One of his many services was driving the “Baronial Bus” to haul gear from his Barony to and from each Pennsic.

Maestro Giuseppe indulged in the occasional grand gesture. At War Practice during the reign of Byron and Ariella, when he took on the position of Kingdom Chamberlain along with Master Meszaros Janos, he presented the Kingdom with a fire ring adorned with escarbuncles to be used in the Royal Camp at Pennsic.

The list of awards he has received in recognition of his work over more than 17 years in the SCA encompasses not only most of Æthelmearc’s Kingdom awards and orders, and awards from his local Barony of the Rhydderich Hael, but also awards from the Barony of Rising Waters across the Niagara River in Ealdormere. Most recently he was recognized by King Timothy and Queen Gabrielle with a Sycamore at War Practice last spring for his thrown weapons targets and the Kingdom fire ring.

As many of Maestro Giuseppe’s friends have been shocked by the news of his sudden passing, stories of the ways he’s helped others are emerging.

Baron Magnus and Baroness Miriel of the Rhydderich Hael posted a remembrance of Maestro Giuseppe on their blog site, which eloquently describes how beloved he was in his barony. In that post, they noted, “Joe was a fixture in our Society, constantly working in front of and behind the scenes to make the Society a better place for others. Perhaps it was this singular dedication and drive that makes his passing so hard to imagine. Joe never stopped and no one expected he ever would.”

THLady Renata Rouge remembers, “About 10 years ago, my sister’s house burned suddenly. She lost EVERYTHING. It was a few weeks before Ice Dragon, which Joe was autocratting at the time. I felt like a chicken running around without it’s head, trying to arrange for donations to help my sister and the girls. Joe and [Mistress Tiercelin] both emailed me to say that they had arranged for space at Ice Dragon for people to drop off donations of items and clothing, and that there would be a box for monetary donations, to help with the financial burden. I was shocked, and more thankful than I could gather words for. Sure enough, when we got there, we had a truckload of items and not only did Joe collect donations of money but also gift cards for building stores and such. It was so incredible. Then he insisted on buying lunch for my mother and I (back then, Ice Dragon had the cantina style lunches.) That was really when he and I started getting close as friends.”

Master Filippo de Sancto Martino noted, “To call Joe Piselli my friend is an understatement. He was like a brother. His death still seems too unreal. [Giuseppe] traveled, set up ranges and molded things as he saw fit. In the Hael, he autocratted and ran the shed determined to be the best at both. Joe was a “my way or the highway kind of guy”; determined to make things happen. He worked hard, often overworking himself to the point of hurting himself and becoming a wee bit over cranky.” Filippo continues, “There will be many great stories told about Joe, aka Joe the Just, aka Just Joe, aka Joe knows a guy. I’ll let others tell those stories. They tell them better than me any way. I’ll remember the cranky grumpy bastard I call a brother and a friend. I can see him giving me that look and saying “Really Phil”. And I would say, “Now put on a shirt and grab some rest before you piss any more people off.” 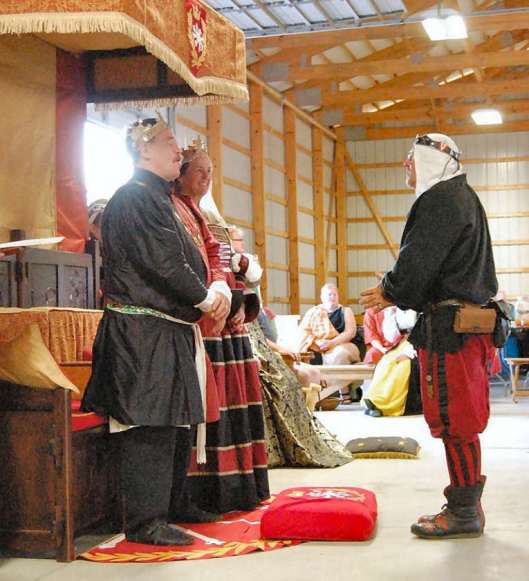 Mistress Anna Eisenkopf recalls Joe fondly, “He was always there with a smile, a hug, and a helpful hand. He would give you the shirt off his back if you needed it. There was a Harvest Raid event that I remember many years ago. It was a weird weather day: one minute the sun was shining, the next it was raining or sleeting sideways. At one point we realized that whenever Giuseppe came out to the thrown weapons range, the weather would decidedly take a turn for the worse. That was one of the early times of laughter with him but there were so many more. This past [Pennsic] War he was recuperating from his first back surgery so he couldn’t be there for my elevation to the Pelican, but he made sure to have someone deliver a gift of a medallion to me. Until we meet again, my dear friend.”

In addition to all his other work, Joe was known as a fine photographer. He kindly gave the Gazette permission to use his photos in our event reports and court reports, and numerous people have said he was the only one who could take a “good” photo of them. THL Renata said, “Oddly enough, Joe was also one of the very few people who could take my picture 1. without me knowing it and 2. while I was not making weird faces. In fact, that was his trick he told me; he said that if I didn’t know he was taking my picture, it always came out beautiful. Of course I took that as a challenge to follow him around, trying to catch him pointing his camera at me.”

One of Joe’s photos, of Duchess Dorinda.

Master Filippo recalls that Giuseppe was also known for his fashion sense. “He was… a clothes horse. He wore decent attire at events, [was] shirtless for take down and set up, and dressed to the nines for court.” Baroness Aemelia Soteria noted that Joe was usually shirtless on the thrown weapons range as well, while THLady Govindi Dera Ghazi Khan commented “He said he’d never wear a t-tunic!”

On Sunday, November 12th, there will be a Celebration of Life for all of Joe’s friends and family-by-choice. More details will follow when they have been finalized.

Maestro Giuseppe is survived by his sister Jaye Lynn, his brother Lawrence, his nephew Matthew, his niece Emily, his inspiration Lady Ysabeau de Comport, his bejant (thrown weapons student) Baroness Aemelia Soteria, and a large host of friends across the Society.

On Saturday evening at the Kingdom Arts & Sciences Champion’s event in Nithgaard, King Gareth and Queen Juliana held a moment of silence in memory of Master Giuseppe, and that night many good gentles all around the Kingdom raised a glass to their friend, Joe.