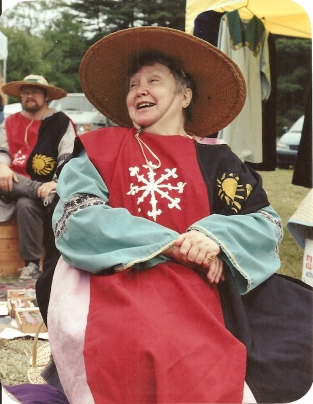 The AEthelmearc Gazette is saddened to report the passing of Mistress Achren of the Debatable Lands, also known as Achren Ancyros (Ruth Reilly) on December 18th after a long illness. She was 88.

Mistress Achren joined the SCA in the late 1970s along with her son, Lord Rolf Schwartz, and later her daughter, Monica. She served as Baronial Chirurgeon, helped autocrat events, and cooked feasts, including a memorable late period German one for which she was positively gleeful at being able to show documentation for potatoes within period. However, she was better known for her poetry and work in theater arts. She organized performances of comedies by members of the Debatable Lands at events, with a group initially dubbed “Commedia Forensica,” but later renamed the “Dismal Players” in honor of Earl Yngvar the Dismal, first King of AEthelmearc, who agreed to be their patron.

Being older than many of the other members of the Barony-Marche, Mistress Achren became an adopted mother to many Debatable Landers. She opened her home to Scadians, fed them, advised them, and helped them in many ways. Mistress Linette de Gallardon, once a student in the Debatable Lands and currently living in the Shire of Owlsherst in the East Kingdom, wrote: “Achren was so very kind to me when I joined the SCA almost thirty years ago. She hosted many a gathering in her home – all of my fond gaming memories are around her dining table. She knew I was struggling financially and always found a subtle way to sneakily give me something to eat or take home “oh, no one here will eat it, will you take it?” Conversations at her house were never boring, flitting from subject to subject with lightening speed. She was such a wonderful person.”

Sir Maghnus de Cnoc an Iora of the Debatable Lands, who fought for the honor of Mistress Achren in a number of Crown Tournaments, recalls, “I met Achren some time before I finished my PhD, which would make it at least 35 years ago. She opened her home to me as well as to many others. I lived in a bedroom on her second floor for some months back in the day. Achren did a good deal of painting with period pigments; that is the art for which I remember her. She, along with Rolf and John, ran the CHAT guild- Chirurgeons, Thaumaturgists, Hermeticists, and Alchemists- which met on the 5th Tuesday of every month. She was brilliant, and I learned a great deal of history from her. I remember talking at length about the Bronze Age, the Antikythera Mechanism, Pompei and the volcano at Thera. This was a large part of the inspiration for the Bronze Age Events, the two events that I have ever autocratted. I will say that though her lungs were giving out, her mind was undimmed when I last saw her. We talked about politics, science, science fiction, and philosophy. She was an amazing and compassionate woman.”

Achren was known for her keen wit and brilliant mind. Dame Margaret Makafee of the Debatable Lands remembers her “brain shifting to high gear in a conversation, because Achren, with that sweet sly smile, asked the question that drove through the gaping hole in your thesis.” She continued, there was “the joy to know she was in camp and feeling well, or how she made you feel right at home — in her home, in her camp, or wherever she was.”

Mistress Achren received her AoA in 1982, was made a Court Baroness in 1988, added to the Order of the Silver Crescent (East Kingdom’s order for service) in 1994 for founding Chirurgeon’s Point at Pennsic, and eventually inducted into the Order of the Laurel in 1998. She also held numerous Comets from the Debatable Lands for arts and service.

Maistir Brandubh o Donghaile and Mistress Hilderun Hugelmann, Baron and Baroness of the Debatable Lands, said, “We are greatly saddened by [Mistress Achren’s passing], and have missed her quick wit and mischievous smile. Our heartfelt condolences to those that were close to her. We welcome ideas on how to honor her memory here in our Barony.”

Mistress Achren is survived by her children, Lord Rolf (Paul Reilly), Vincent Reilly, and Monica Reilly; numerous grandchildren and great-grandchildren; her former apprentice, THLady Margery of Kent; and her long-time companion, Master John the Artificer. Her obituary is available here.

1 thought on “In Memoriam: Mistress Achren of the Debatable Lands”