Here continues the Record of the Reign of Gareth and Juliana, King and Queen of Sylvan Æthelmearc at Queen’s Rapier Championship, December 9, AS 52, in Their College of Silva Vulcani; as recorded by Lord Arias Beltran del Valle, Jewel of Æthelmearc Herald, with the assistance of Nichola Beese.

As has been Their tradition, Their Majesties first invited those attending their first event in the society to come forward and receive a drinking vessel to take with them as they continue their journey in the Society.

Their Majesties gift people at their first event with a drinking vessel.

The children of the kingdom were then sent in pursuit of the toy chest to provide them entertainment during Their Majesties’ Court.

Their Majesties then invited before them Countess Elena d’Artois, and introduced her as the Rapier Warlord for Their Army at Gulf Wars in the coming spring.

Her Majesty then stood before the populace and thanked the competitors to be named Her rapier championship early in that day.  During the preceding tournament, Don Jacob Martinson emerged victorious, and so did She name him to be Her Champion and invite him to take his place in Their retinue. Scroll marking his victory was by Thea de Nes. 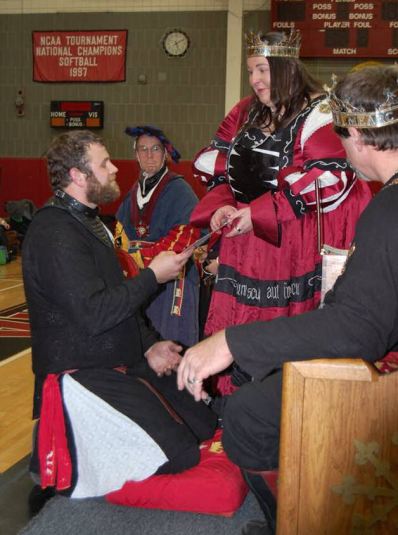 Deianeira Aella was then summoned to Their Majesties’ presence.  They spoke of her efforts to develop her skills in fighting, both in armored combat and with a rapier, and so did They Award her Arms and name her a Lady of Their Court. Scroll by Lady Shirin of Susa.

Next Their Majesties requested the presence of Donnchadh Ruiadh mac Griogair. For his skill in fencing, They bestowed upon him an Award of Arms. Scroll illuminated by Marcia Melia of House Sable Maul, with calligraphy by Baroness Graidhne ni Ruaidh.

Their Majesties summoned Gregory the Bearded before them.  Word had reached Their Majesties of his regular attendance at fighting and fencing practices, and his generosity in supporting other new fighters. Pleased at this work, they were moved to Award him Arms.  Scroll by Lady Shirin of Susa.

Petronia Alexandra was next called before Their Majesties. As webminister, she has improved the College’s website and fixed many extant issues there. She also follows a passion for archery, and assists her local chatelaine.  For this did Their Majesties name her a Lady of their Court and Award her Arms. Scroll by Lady Felice de Thornton. 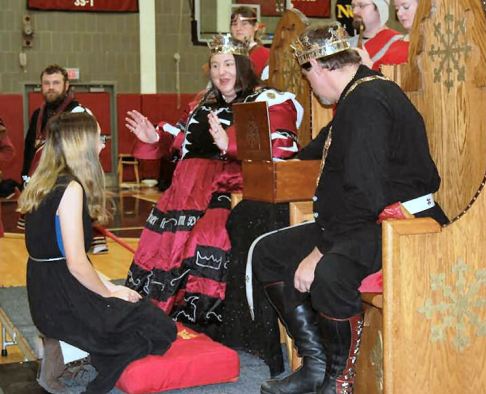 Before Their Majesties’ Court could continue, Master Kieran MacRae, seemingly seized by madness, ran into Court.  Her Majesty demanded he share what spirit caused him to interrupt so blatantly.  Master Kieran then declared it was a spirit of celebration that gripped him so, marking the day of birth of His Majesty Gareth, that so happened to be that very day.  With Her Majesty’s blessing, he then led the populace in song wishing His Majesty well.  His Majesty was then presented with a cake for the occasion, minus the slice His Majesty had earlier indulged in. 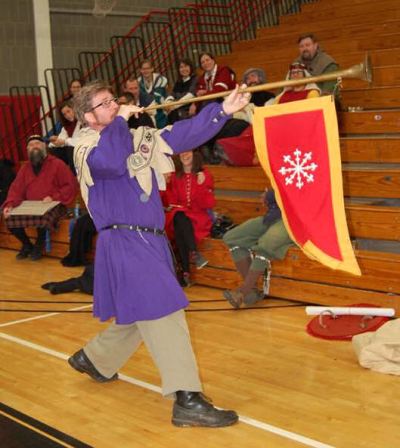 Master Kieran trumpets the news of the King’s birthday.

Lady Charlotte Stark’s presence was then demanded before Their Majesties.  Word had reached Their ears of her skill in making garb for herself and for others, as well as contributing a beautiful buckler to be given as a prize in the Wold Hunt.  For this was she named to Their Majesties’ Order of the Sycamore.  Scroll by THL Julianna Stafford. 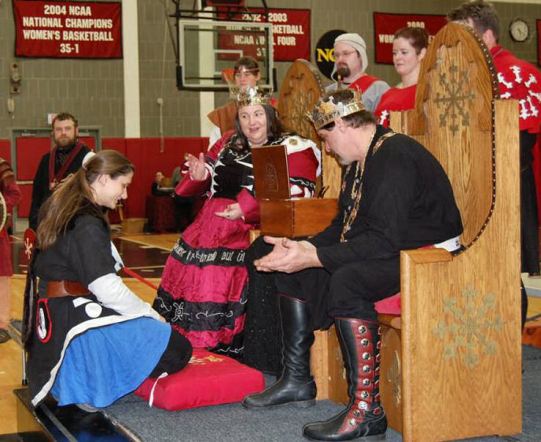 Their Majesties then called for Lord Mathias al Tabai, whose efforts on the fencing field and the archery range had been made known to Their Majesties with great praise.  They thanked him for his tireless defense of Their Sylvan lands, and so made him a member of Their Order of the Golden Alce. Scroll by Baron Caleb Reynolds, with calligraphy and wording by Baroness Graidhne ni Ruaidh.

Their Majesties summon Sorcha McKenzie before them.  They spoke well of her skills in presenting, cooking, and serving culinary art for many.  Many of the populace had expressed similar admiration, and so were Their Majesties of a mind to name her to the Order of the Sycamore. Scroll by THL Vivienne of Yardley.

Lord Robert Hawksworth and Doña Gabrielle de Winter were then asked to present themselves before Their Majesties as stewards of the event that day.  After speaking about the event, Lord Robert was bid to remain before Their Majesties.  They had noticed his continued growth on the fencing fields, even once shouting out his presence from behind enemy lines.  Despite protestations to contrary, Their Majesties determined it appropriate that he SHOULD indeed be there, and did name him to Their Order of the Golden Alce.  Scroll by Baron Caleb Reynolds, with calligraphy and wording by Baroness Graidhne ni Ruaidh. 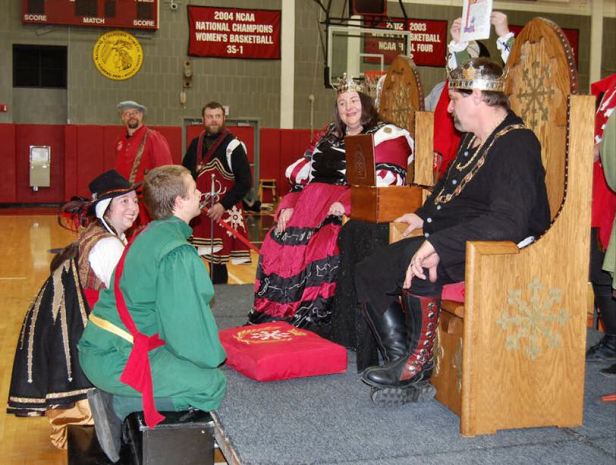 Their Majesties, not having completed Their business with the stewards, then demanded Doña Gabrielle present herself before Them. Her skill on the fencing lists and her service to the Kingdom have long been recognized, but less acknowledged was her work in embroidery and the crafting of Tudor grab.  Their Majesties no longer wished that to stand, and so named her to Their Order of the Sycamore. Scroll by Mistress Fredeburg von Katzenellenbogen.

Her Majesty then stood and spoke again of the honor and prowess displayed in the tournament that day.  She noted one combatant who, though they did not win, comported himself well and honorably, and named Sanada Genjirou Masasaku Her inspiration for the day and awarded him a Golden Escarbuncle. 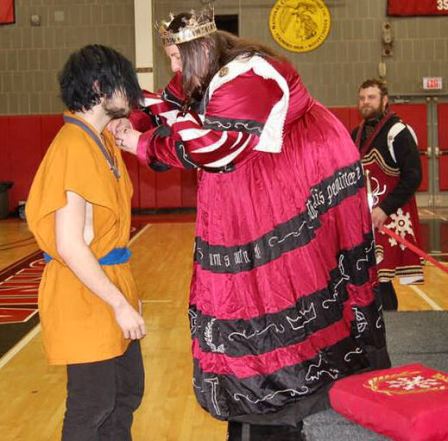 There being no further business before Them, the Court of Their Majesties was then concluded.