I would like to take a few minutes of your time to talk about strange noises that could occur while shooting your bow. Most bows make noise when you shoot them, but sometimes they start making strange noises which could mean a problem. I am not saying that every strange noise means your bow is going to fail and that you should throw it away like a grenade with the pin removed. Some noises can be linked to simple issues that can be fixed easily.

Again, not every noise means that your bow is dying. Some bows are just noisy. If your bow suddenly starts clicking, buzzing, whistling, slapping, creaking, rattling, or making any strange noise that you have never heard coming out of your bow before, stop shooting and look at your bow or have a marshal take a look, for you.

A “thwack” is most likely the string hitting your sleeve. If you are wearing new garb to an event, garb that you’ve never worn on the range before, this can be an issue. If you have floppy sleeves, and don’t have an arm guard to keep the fabric out of the way, take a wide hair scrunchy and wear it on your arm. You might have to borrow one if you don’t have long hair.

A high-pitch “ripping” noise could mean that you loaded your arrow on the string wrong, and that the cock-feather is catching on the edge of the bow’s riser. If you keep doing this, you could have your cock-feathers stripped off of your arrows. I have seen/heard this on arrows that were fletched wrong.

A “scraping” noise can occur on bows without a separate arrow rest. The noise is coming from the arrow’s shaft rubbing against the bow shelf. A layer of bow shelf material (moleskin, bear or calf hair, or silicone) will make this noise go away.

A “whistle” could mean that your string got un-twisted and it is too loose. The whistle is the air rushing through the strands. Un-string the bow, completely, and twist the string back up. Re-string the bow and apply some bow wax to the entire string.

“Clicking” can be a major issue. One click at the same point of the draw could mean that an air pocket has developed within one of the limbs’s laminates. If it only happens once, at the same point, and never gets any louder, it could just mean an annoyance that might never get worse. It it gets louder, or if you hear multiple clicks, the limb could be slowly de-laminating (pealing apart). 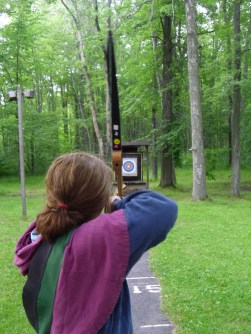 A single “click” on a take-down bow could be either a limb isn’t fully seated in it’s socket. Or, it could mean that you didn’t tighten the thumb screws enough before you strung the bow. Finger tight is fine, but you have to tighten them before you string the bow. Or, it could mean that there is something in the socket, under the limb. Like dirt, or a wadded up sticker. Take the bow apart, check both sockets and limbs, then put it back together, string it, and see if it makes the same noise. Take-down bows can de-laminate just like one-piece bows.

Sudden creaking and groaning, when drawing the bow, could also mean de-lamination. Creaking noise when you draw the bow followed by the bow shaking in your hand, when you release, means that you should un-string the bow, ASAP.

I bring up the issue of noises, because I encountered a strange noise that I could not identify, with my take-down recurve, the other day. The bow started making a loud “click” at the 2 inch mark of the draw, but not when I backed off. It didn’t make the noise the week before. I was unable to figure out where on the bow the “click” came from and it persisted after I took the bow apart and put it back together. The bow was about 35 years old and I didn’t think that it was worth trying to fix. Oh, don’t worry; it’s not dead, I just sent the bow upstate to a farm so that it can run free. As nice as that bow was, I didn’t want to risk a catastrophic de-lamination while at full draw.

A sudden, new noise, accompanied by a radical change to where the arrow is going, could mean a bigger problem than just an annoying noise. It is your bow, and if you shoot it on a regular basis, you should be aware of any changes to how the bow feels in your hand and how it sounds. If you detect any changes, to the sound, feel, or how it shoots, please remember, your archery marshals are here to help.