I actually didn’t start in medievalism with the SCA. My younger brother and a few of our high school friends were involved in a similar organization. I went to a few event there and was hooked. At the time, there was a once off practice held in the space as St. Swithins’ fencing practice. So from then on, I played in both organizations.

Where did you start, what was your first event?

My first SCA event was a Bog Three Day back when it was at a horse track. Maynard and Liadain were on the thrones Master Quinn and Dame Viv were still baron and baroness.

What is your persona? Genro-viking

Why did you pick this persona? In the first medievalism organization I joined, I started with a viking group. I started learning about Vikings and the different cultures all under that umbrella term and fell in love with those worlds.

Oh boy. If anyone’s noticed my generally packed schedule at SCA events, my mundane life won’t really surprise them. I work full time and have entirely too many activities. I’m involved with several fighting organizations. I train with weight lifting and distance running, which ends up with my peer pressuring folks to run the Pennsic Half Marathon with me or run a Tough Mudder as Team Aethelmearc. I dance with a troupe under Maria Hamer/Oola Gulabi’s direction that performs at SCA events like Pennsic as well as mundanely. I like hiking and biking and recently got into rock climbing. I have a DnD game night and a few crafting/art circles I drop in on. I’m an avid reader. And when I’m not doing any of that, I’m car pooling out to some event.

I started in the SCA with rapier. After my first event (thanks to Master Quinn) I started heavy fighting. I’ve tried thrown weapons, archery, and siege. I’ve been on a few reigns’ Queen’s Guard. And I somehow fell into a command position for the rattan army this year. 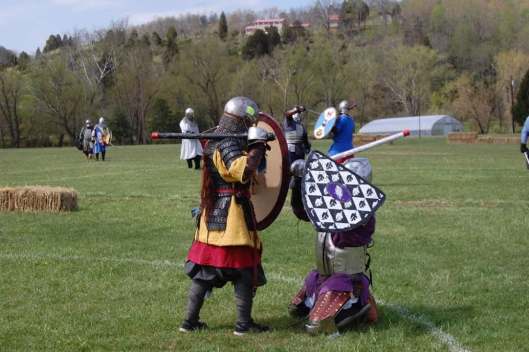 Tell us a little bit about your SCA experience (jobs, offices, duties, etc.).

For as long as I’ve been in the SCA, I haven’t really had an office or a job. I’m a marshal and commander for the rattan army.

I didn’t have any goals, really. If anything, I kind of wanted to be one of those folks that was around for 15 years before anyone realized I didn’t have an AoA. I can confidently say I failed, spectacularly, at that mission.

I want to keep improving everything I do in the SCA. You know, fighting, service, garb, all of it. I want to help other folks improve and meet their goals. I want to keep beguiling new folks into the SCA. I want to see Aethelmearc become the envy of the Known World.

I’m not entirely sure how to phrase this one. There have been a few things that wigged me out when I started the SCA, like tournaments and the like. But finding out there’s a couple youth fighters and SCAdian children looking up to me is easily the most intimidating thing I’ve ever encountered. 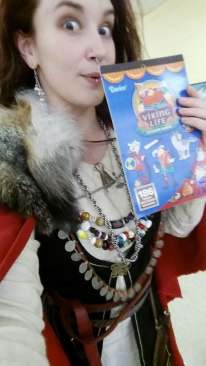 Most people in the SCA desperately want to help and support new people. Some of them are really, really bad at expressing that sentiment. So, you might get overwhelmed with conflicting advise. It’s all coming with the best of intentions. Find some folks in the SCA you trust to help vet that information.

So I know some folks might say Peerage, but I cant picture that as an award. It’s such a beast of a job, I’ll leave it to the polling orders to decide if I’m ever worthy of that mantel in, like, a decade. Maybe.