I saw a newspaper ad in the summer of 1976 about a huge demo called the “Camelot Fair” being held in Newport, RI in conjunction with a visit of the Tall Ships for the US Bicentennial. A high school friend and I lived in a small town in Massachusetts nearby, so we went and it was really cool. I spent a long time talking to Master El of Two Knives (then Seneschal of the East Kingdom, now, alas, deceased) about joining, but when I told him I would be leaving in a few months for college in Fredonia, NY, he told me there was no SCA group there. That was true; the Rhydderich Hael wasn’t founded until 3 months later. I ran into the SCA again when Ice Dragon I was held in the student union of SUNY Fredonia. I attended as a mundane, but as a freshman music major I was busy with other things and didn’t join at that point.

Where did you start, what was your first event?

My friend from high school saw another ad for an SCA demo that was being held in Providence, RI the following summer between our freshman and sophomore years in college, on July 11, 1977. Neither of us remembers which one suggested that we dress in our best attempt at medieval garb, but I showed up in a long ruffled skirt from my Bicentennial costume, and a peasant blouse and vest borrowed from my mother’s square dancing outfit, while my friend went in her “Little House on the Prairie” inspired prom dress (hey, it was the 70s), and both of us wore chaplets of fake flowers and ribbons. The Scadians kept giving us the side-eye while we sat on a train embankment watching the fighting until one of the gentlemen finally came over and asked where we were from. I said “We live just over the state line in MA.” Exasperated, he said “No, I mean what SHIRE are you from?” After a moment of confusion, we said “Oh, we’re not members of the SCA.” He replied “You are now!” and dragged us into the dancing. We were invited out for ice cream with the Scadians after the demo and to the post revel that followed. I fell in love with the whole thing and haven’t looked back (thanks, now- Baron Sarant the Myopic and Countess Elspeth Keyfe of Neddingham!). I still consider July 11 my “SCA Birthday.” My friend stayed with the SCA for a while; while she was never as active as I was, she still goes to an occasional event in the East Kingdom and is now a Court Baroness.

Initially I had this idea of being an early 16th century English tavernkeeper’s daughter, managing the tavern while my father was in debtor’s prison so I could earn enough money to free him. I chose 1487 as my birth year to avoid the War of the Roses, which ended in 1485. All of that pretty much went by the wayside once I started accumulating SCA awards, because a  tavernkeeper’s daughter would never become a Lady, never mind a peer! I used to dress primarily in late period but these days I really don’t have a specific persona and mostly dress in whatever period is comfortable.

I was (and still am) a huge fan of Tudor and Elizabethan history, even as a kid when I read stories about Henry VIII and Elizabeth I. I was also really into renaissance music – I sang in my high school’s madrigal choir, and I chose the name Arianna because the first opera ever written, by Claudio Monteverdi, was the “Lamento d’Arianna,” which is the story of Ariadne and Theseus. My byname is based on the main street that runs through the town where I grew up, Winthrop Street, named for Governor John Winthrop of the Massachusetts Bay Colony. I “medievalized” the spelling to Wynthrope, just because. I’ve never found an actual town called Winthrop in England, but there are two villages called “Winthorpe,” and the one in Nottinghamshire is said to derive its name from the Old English wynne þrop, meaning “hamlet of joy,” which is pretty close.

I’ve lived in the Barony-Marche of the Debatable Lands since 1990, but spent my first 13 years in the SCA in the Barony of the Rhydderich Hael, where I was its second Seneschale and led the group from Shire to Barony status. I also lived in the Barony of Stonemarche (New Hampshire) for just under a year, and spent my first few summers between semesters of college in the Shire (now Barony) of Smoking Rocks (SE Massachusetts) very near the Barony of the Bridge (Rhode Island). I was a founding member of House Elandris but dropped out in the mid-1980s. While I’m not currently a member of a household, I’m part of a group that camps together at Pennsic called Polyhymnia. We camp next to the Debatable Lands on the Serengetti, are easily identified by the two-story white house on a trailer that belongs to Mistress She’erah, and our camp motto is “Competent men and organized women, or is it the other way around?” Most of the members of the camp are involved with the Debatable Choir, i Genisii, or both.

I’m an Instructional Designer, which means I write corporate training materials like eLearning, webinars, and instructor-led classes, and occasionally do training as well. I live in the suburbs north of Pittsburgh, about 30 minutes south of Cooper’s Lake (so you can all be jealous). I have two sons who were raised in the SCA; Kenneth (Lord Cionaodh mac Eamoinn) is 23 and not very active any more; his brother Robert is almost 20 and is well-known as Lord Robert MacEwin of Thornhill. Their father, my husband, was Master Johan von Traubenberg, who passed away in 2005. My current gentleman friend, Lord Robert Pour Maintenant, has lived with us since 2012. The kids moved out last summer so now it’s just us and the cats.

I’m a huge dabbler, so after all these years I’ve done a little bit of everything. Most of my energy has gone into arts and service – my Laurel is in scribal arts, and I direct the Debatable Choir as well as the Pennsic Choir on occasion. I sew garb and banners, weave, embroider, and do archery. I used to autocrat a lot of events but I don’t have the stamina for it any more. I spent six years as a heavy fighter in the late 1970s and early 1980s, eventually squiring to Sir Ogami Akira, though I quit fighting before the creation of his Clan, Yama Kaminari. I wasn’t very good at fighting, but I had fun and learned a lot. And I’ve been a youth combat marshal for the past decade. I was honored but also amused to receive a Golden Alce from King Isenwulf and Queen Rosalinda; I certainly never expected to be given any type of martial award!

In the last year, I’ve also become a member of the Commedia del’Arte troupe i Genisii, and have honestly never had so much fun. Come to our Pennsic show, Monday night of War week at 9pm in the Performing Arts Pavilion!

Tell us a little bit about your SCA experience (jobs, offices, duties, etc.)

Again, I’ve held a lot of offices: Baronial Seneschale of both the Hael and the Debatable Lands, regional Seneschale, Kingdom Chronicler (which is what earned me my Pelican), Principality Signet, Kingdom Youth Combat Marshal, and just in the past month I was warranted as a Mistress of the Lists at-large. I’ve held other offices in one or the other of my home baronies, like Baronial and at-large Pursuivant, at-large Chirurgeon, Minister of A&S, Baronial Historian, and editor of the Domesday in the Hael and the Dark Pages in the Debatable Lands. I honestly don’t remember all of the events I’ve autocratted any more, but certainly dozens including three Ice Dragons, three or four Coronations/Principality Investitures, two or three Crown/Coronet Tourneys, four or five regional/Principality Twelfth Nights, a BoD meeting/revel, a Baronial Investiture or two, and a host of smaller local events. It makes me sad that I’m really not physically up to the challenge any more.

I’ve also enjoyed serving as an editor and writer for the Æthelmearc Gazette. I worked with Mistress Tiercelin to found it, and I’m thrilled that it has become such a fixture in the Kingdom.

The thing I’m proudest of is my involvement in the Principality Committee that took the Western Region of the East Kingdom to Principality status in 1989. I was especially pleased when my design for the Arms of Æthelmearc was selected by the populace, so you can all blame me for the escarbuncle. It’s not that hard to draw, honest!

To have fun. Well, and make my corner of the SCA run as well as it can for as many people as possible. Organizing things, information, and people is my super power.

I’m not easily intimidated, but when an entire household chose to bully and exclude me in the early 1980s, that was pretty hard to deal with. My response was to make a lot of friends across the Kingdom, and to work primarily with like-minded people at the local level.

Wow, only one thing? A lot of things that I want are out of my power, like seeing the Order of the Valiance for non-heavy/rapier martial arts created, or for the BoD to get rid of Kingdom newsletters in favor of online info, or for the SCA to allow groups to accept event reservations via PayPal.

But my personal goal is probably just to keep making things fun for other people, especially in choral music and other arts. Oh, and I’d like to master tablet weaving.

Try everything! Like the theme song to the movie Zootopia, be open to new experiences, and don’t let failure stop you from trying again. There are a lot of great people in the SCA who can give you information and advice – be open to it from everyone around you. You never know who might light a fire for you that could turn into your next passion. 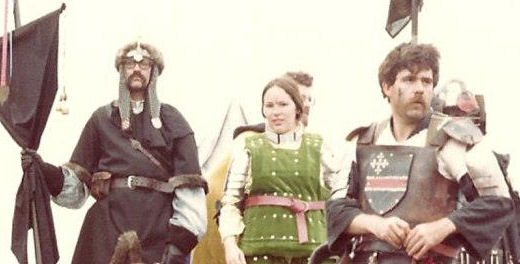 If I were 30 years younger…. well, I’m kind of sad that I never got into rapier. I didn’t know much about the rapier community until my son, Robert, started fencing about 5 years ago. They are fantastic people and they seem to have a ton of fun. Alas, my joints aren’t really up to it these days.

I’ve gotten every award I could ever have imagined getting (and a few I didn’t), so there’s not much left to aspire to. I would have liked an opportunity to sit the throne, but my lord has no interest in being King and my son has totally reneged on the promise he made back when he was six years old to make me Queen someday, so I don’t think it’s in the cards. But the SCA was never about awards for me, anyway, so I’m good.