SCA Name & title: Lady Aerin (Euron) Wen Pengrek. (I wanted to have the descriptive name of “Aerin the pale and curly haired” and this was as close as I could get)

I joined the SCA by accidental assimilation. A friend in high school one day said “hey, I know these people who live nearby, we should all go there after school.” And about a dozen of us started hanging out there regularly. It was the home of Dame Morgan Silverlocke.  Some of my friends started making boffer weapons. Then one day I overheard them talking about picking another name and I wanted to be included, so I chimed in with one from a book I was reading — Aerin. I still didn’t actually know about the SCA. After awhile our group became regulars at a local fight practice as another hang-out location. A couple years later I went to my first event, and decided to stay.

Where did you start? What was your first event?

I started in, and eventually returned to, Shire of Coppertree. I can not recall the name of my first event, but it was at Cornell University in Myrkfaelinn in 2003. My second event was Pennsic.

900s Celtic orphan, ended up in the Middle East for a time (possibly snatched by Romans) where I was found by vikings and returned to the north. Short version: I’m a Celt with Stockholm Syndrome.

My SCA family is made up of predominantly viking personas. I wanted something that fit with my actual heritage as well as living with vikings. Not to mention the garb is within my ability to make. The Middle Eastern bit was because I was heavily into belly dancing for a number of years.

I am a member of Highrafters house primarily, Caer Cinniuint by marriage. I am also a member of the Scadian Nac Mac Feegle and am known as Bonnie Wee Charlie.

I work as a paginator/copy editor at a local newspaper (I layout newspaper pages).
The most important part of my mundane life came about because of the SCA. I met my now husband (Micheal MacCogadhain) at a Seven Deadly Sins event in 2005 (one of the photos here was taken at that event). I started dating him in 2010, and because he is a squire of Duke Sir Morguhn Sheridan, I decided I could skip the vetting process. We now have two small children — Charlotte Teagan, 4, and Morguhn, 2 — which monopolizes most of our free time.

I did heavy fighting for a few years early on (two stick). I’m a bard, belted to the marvelous Mistress Morgana Bro Morganwg. I also dabble in belly dancing and embroidery.

Tell us a little bit about your SCA experience (jobs, offices, duties, etc.).

I am the unofficial cat herder for Coppertree. Officially, I am the shire webminister, chronicler and social media officer. I received my AoA at around the 10 year mark (you don’t have your AoA??) and my Keystone a year later.

None. Seriously, I was just there to spend time with friends, help my shire and have fun. 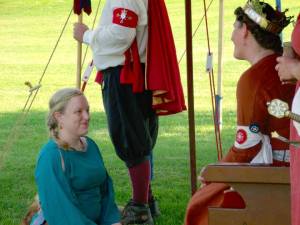 To do better. After Charlotte was born, Micheal and I noticed the majority of our conversations involved the SCA. We talked about the things we (and we hope others) will teach her, events and activities we look forward to her experiencing, and we realized that in those conversations was a desire on our parts to do more with the society ourselves — to be better Scadians. So I made a commitment to do better — make more period garb, write more stories and songs, volunteer more, etc. It’s a slow process, but I’ve found it enjoyable for the most part.

Honestly, every time I go try something for the first time, it’s intimidating: Getting authorized for heavy fighting, dancing or performing in front of strangers, retaining, autocrating an event, volunteering at Pennsic (which I have not actually done yet as I was thwarted by a nasty cold bug, but I mean to try again). But typically once I’ve done the thing, I do OK going forward.

See above — we have two small children. If I can get more than one newsletter out in a year I’ll be happy, lol.

Some of the best advice I ever received in the SCA was if you’re not having fun, don’t do it. This is a hobby, it’s meant to be enjoyable. Find whatever it is you enjoy doing. Even if it’s just dressing up and hanging out with interesting people. And if an activity you once enjoyed is no longer fun for you, for whatever reason, it’s OK to stop.

To make beautiful garb with ease. I’m very proud of how far I’ve come when it comes to making garb, but I’ve about reached the extent of my abilities just making basic things.

It’s not a matter of modesty, I honestly do not have much in the way of honors aspirations. As previously stated I tend to dabble in things that interest me, so arts awards are unlikely. I may one day reach Millrind or Pelican, but if I don’t that’s OK too. I joined the SCA for the social aspect, and I stayed because so many people I’ve met through the society have become family.