My interest in anything Viking age, and anything early-period brewing merged last weekend when Myrkfaelinn hosted an Iron Age stone brewing demo at its annual Summer War Practice. Lord Ulf Barelegs traveled from afar to help THLord Robert of Ferness and me work our way through the different steps of successfully brewing an all-grain beer with nothing modern but a thermometer – and honestly, we did not even truly need that! Inspired by a Facebook post by a Texas brewer who shared his interpretation of an Iron Age brew in northern continental Europe around 2,000 years ago that he brews for an Iron Age immersion week each spring, I figured we could give it a try too.

While 2,000 years ago is a wee bit past the Viking age, it is unlikely the way of brewing changed all that much from the Iron age until Middle age monastic breweries started pushing the boundaries of brewing volume and shelf-life. And while there might not be a whole lot of recorded history, with only a single example from the Icelandic Ljósvetninga saga telling of milk warmed by stones, there is plenty of archaeological evidence for the brewing of beer in Viking age context. Residues of a fruit & honey beer from northwest Denmark of circa 1500-1300 BCE, found in 2014, included honey, bog cranberry, lingonberry, bog myrtle, yarrow, juniper, birch tree resin, as well as wheat, barley and/or rye. And there is nothing archaeologist like better than rubbish heaps and trash middens, of which the old farmsteads have plenty! It seems in central Norway the rubbish suggests Vikings and their descendants brewed beer by tossing hot rocks into wooden tuns. Many a fire-cracked stone is found at most of the farmyards of old, historically named farms. Unfortunately for the archaeologists, since most archaeological digs are initiated by construction sites, as developers are required to check for cultural artifacts before beginning construction, most construction sites avoid developing through a farmstead. This means most of the archaeological information we have about the Viking age comes from graves, and most of the archaeological information about the Middle ages comes from excavations in cities – which misses a large chunk of data as most people back then lived in the countryside. Recent small-scale excavations in farmyards found that the oldest farmsteads carbon-14 date to 600 CE, the late Iron age.

Our own Robert of Ferness admitted to having found and handled many FCR – archaeologist-speak for fire-cracked rocks – at various sites, including in Iceland. Not provable as stones used in brewing per se, but probable to have been used to heat a liquid. They could also have simply been stones put too close to fire in a hearth, or even stones cracked by intense heat in a structure fire. 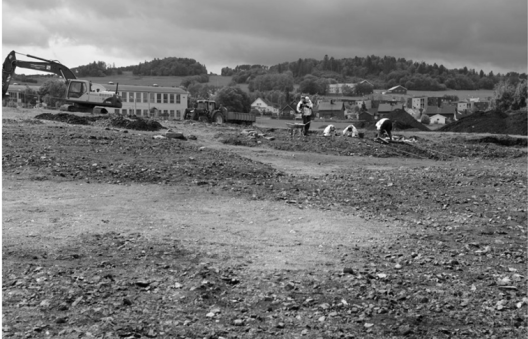 Nineteenth century Sociologist Eilert Sundt recorded an encounter on a farm in 1851 in Hedmark, Norway after seeing a pile of strange looking smallish stones. “What’s with these stones?” he asked and the farmer replied “They’re brewing stones. Stones they used for cooking to brew beer, from the old days when they did not have iron pots.” Sundt noted that most of the farms he visited had piles of burned or fire-cracked stones, and every time he asked about them, he was told the stones were from brewing, when they would be heated until they were glowing hot and plopped into the wood vessel to heat things up. The stones were everywhere, Sundt wrote, and so thick and compact in places, houses were built right on top of them! A modern excavation at Ranheim, near Trondheim, Norway, found 700 cubic meters of stones from just one portion of the farmstead. A test sample of 24 farms found that 71 percent had fire-cracked stones. Hot rock brewing would not be as obvious in the archaeological record elsewhere as with Norwegian brewing stones because of the types of stones used, as most regions use stones which tolerate heat without fracturing, like the igneous rock granite and basalt. Brewing beer with hot rocks is nothing unusual, and traces of brewing with stones have been found in England, Germany, Finland and the Baltics.

And thus, in the great tradition of Gulating’s law – the Gulating being the Norwegian governmental assembly which met from 900 to 1300 CE – requiring three farmers to work together to brew beer, Ulf, Robert and I set up our brewing at the Myrkfaelinn Summer War Practice to make some Viking beer! For those who could not make it, this brewing session was a trial run for the Pennsic Iron Age brewing workshop which will be held at Aethelmearc Royal, war week Saturday, starting at 2pm.

The grain was milled on-site, and by hand.

With an infusion of:

The herbs were fresh and picked the day before. The hops are homegrown and have been sitting in the dark in my basement for about a year. This way the brew gets minimal flavor, while still benefiting of some of the preserving qualities.

Now what did we actually do? Let me show you!

First thing we did was start a fire to make coal bed.

Then we used that fire to make a juniper infusion and clean out the wood tub (the mash tun) with the scalding infusion to clean and sterilize. 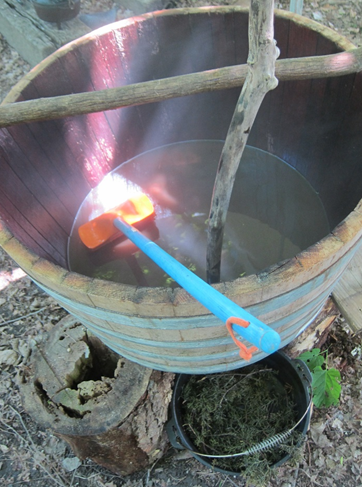 Then we put a layer of juniper twigs covering the bottom, concentrating around the plug (there is hole in the bottom of the mash tun, kept closed with the plugging stick). 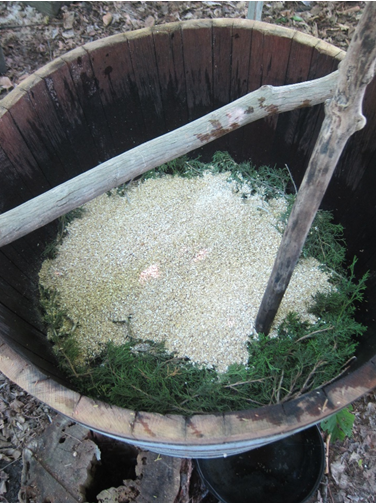 We milled the grains by hand: we used 2 row barley, malted oats and some random leftovers, including some rye, as well as some peat smoked malt.

Then we added water. We added it cold from the tap – it could also be pre-heated in sun, especially at Pennsic.

Next, we put stones on the coal bed and built another fire right over top of them, with a hardwood / pine mix I had brought from home to make sure we had dry wood.

In the traditional Scandinavian style, we made a separate tea, or infusion, with the herbal bittering agents. We used yarrow, some mugwort, aged and yellowed hops, some henbit, and baby spruce tips.

When the fire was mostly burned down again, we start pulling stones, and added them to mash (the soaked grains) 3 or 4 at a time. Ulf really enjoyed this bit, as did my kid when we did a water-only trial in the back yard. We tried three metal grabbers and found the funky accordion style firewood grabber worked best.

We kept checking the temperature, especially the top and bottom as the mash & juniper was quite insulating and there often was quite a heat difference between the top and the bottom. It was difficult to stir with the juniper branches covering the bottom. At around 130F we observed protein break – thank you Ulf for pointing that out – which made the surface of the mash all foam up.

We kept adding hot rocks until overall temps were at or over 160F, and then we kept it at this level for an hour and a half – adding more stones as needed.

By now, whenever a new hot rock is added, the wort (the liquid surrounding the grains) surrounding the rock immediately went to a boil, creating lots of steam, a wonderful smell of sweet malt, lots of sizzling & sputtering, and quite the surface boil. This part, which takes about an hour and a half, is spectacular to watch!

At around the end of the protein rest (the hour and a half) we noticed the protein foam had dissipated, and the wort started to settle. So, we put the draining bucket under hole, carefully wiggled the plug stick, and slowly drained the wort into a sterile bucket. I would plug the drain back up each time the bucket was ready to dump the filtered wort into a sterilized fermenter bucket. This traditional way of having a combined mash tun (where the grains are soaked) and a lauter tun (where the infusion is drained off the grains) worked surprisingly well.

We sparged with boiling water. We intended to use juniper water but ran out of cooking vessels as we started to cook dinner while waiting for the protein rest. We drained about 4 gallons from the initial wort, and another 2 gallons were sparged, by trickling boiling water over the mash to wash out any remainder sweetness. The last sparge we handed around for anyone to taste. 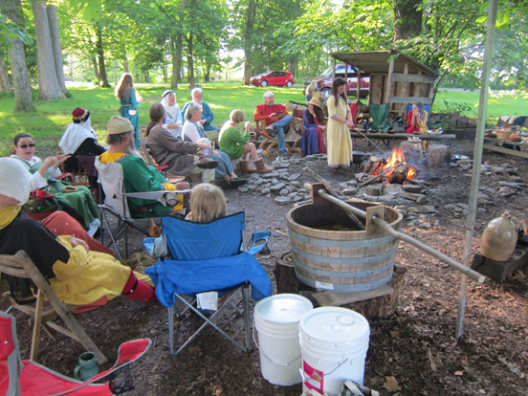 We made about 8 gallons of wort from about 25 pounds of grain, including 4 pounds of oats I sprouted and roasted (called malting) over the winter, and bittering adjuncts grown and harvested from the backyard. All in all, it took about 6 hours from start to finish, but we also took all the time we wanted and ended up cooking dinner over the hot stone fire as well – rabbit with spring onions, over barley, nettle and plantain. It was a good day, and I can’t wait to taste the results!

The things we learned:

Back home, I added some Nottingham dry ale yeast, and Robert added Safale WB06 dry ale yeast to his batch. When we tried the wort at about the 5-day point (same as for Pennsic), we found it to be more acerbic and herbal tasting than expected. I checked back in with the Iron age brewer and he suggested not to boil the herbs, but to only steep, and to add the infused tea as a sparge, not during heating. We will do further testing before Pennsic and look forward to sharing our results with you then! Skål!

For anyone who would like to try Cy Phorg’s Iron Age interpretation:

Steep in ½ a gallon of water a combination of:

All preferably harvested in spring, use with flowers and buds when possible.
Sparge with the herbal tea.

He uses kveik yeasts, farmhouse/saisson style yeasts, and Belgian/Trappist style yeasts to good effect, often in a mixture and often with a health addition of bread yeast. It will be ready to drink in as little as 48 hours, though in his experience he finds 72 hours is a good spot to start pouring. It is not intended to be carbonated, and should be consumed in a day or two.

More on brewing with stones: