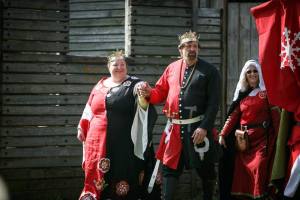 Their Majesties Gareth and Juliana

Tomorrow (Saturday, August 3) will be a very busy day for AEthelmearc. Here is a summary of the Kingdom-specific events that are scheduled:

Her Majesty Juliana said she and His Majesty would love to have as many gentles as possible come out with their baronies, their shires, their cantons to support their Kingdom in the procession to Opening Ceremonies tomorrow. All are welcome to muster in AE Royal between 5 and 5:30 p.m.

The Royal Cocktail Party is not the annual AEthelmearc party that is open to all — that has been moved to Thursday night.

The Cocktail party is designed for our Crown to welcome the Royalty from other lands to our Kingdom. Set-up will be from 6 to 8 p.m., clean-up is from 10:30 to 11 p.m., and volunteers for either are very welcome.

Master Creador, who is coordinating the food for tomorrow’s party, said we have plenty of drinks but still need some snacks and other comestibles. All food donations are welcome. Donations can be dropped off at Hospitality up until 4 p.m. and then again from 7 to 8 p.m. — he asked that gentles not drop off items during Opening Ceremonies.