I briefly encountered the SCA In high school, but did not get involved in a lasting fashion.. Decades later, while choreographing the combat on a production of ‘the Scottish Tragedy’ I cast several local scadians as combatants… In return for their attending rehearsals I started attending the local rapier practice.. The rest is history.. (pun intended)

Where did you start, what was your first event? Melee Madness within the Barony of the Endless Hills

What is your persona? Elizabethan English

I’ve always been Interested in that time period, with Shakespeare, period theater and swashbuckling

I’m a member (Duckling) of the Oracle of the Duckpond, and an ally of the Black Priory. I have similar connections to a few other notable households as well.

Tell us a little bit about your life outside the SCA:

I’m a native New Yorker, I was born in the Bronx and grew up on Long Island.. I got into theater and fencing at a very early age (approx ten or eleven). My degrees and post graduate work at Villanova and Yale were in theater, both technical design and performance. I spent about 20 years managing bookstores and writing book reviews until the great independent bookstore collapse in the 2010’s.. Since then I’ve been doing customer service.. And local/regional theater. I’m married with 2 sons in their 20’s, We’re a geek/theatrical family.

Quite a bit of Rapier. Lots and lots of Heralding, more Scribal (Wordsmithing) than I should admit to. A bit of Bardic/Theatre. A bit of Brewing.

Tell us a little bit about your SCA experience (jobs, offices, duties, etc.):

hmmm.. Let’s see.. I started out as deputy Baronial chronicler, back when they were still printed monthly. Did that a few years, then became a rapier marshal. Then Baronial Rapier Marshal. I’ve held that office on and off for 15 years. Spent 6 years as Regional Rapier Marshal and 4 years as a Kingdom Deputy Rapier Marshal. Similarly, I spent 7 years as Baronial Zule Herald (aka “Voice of the Hills”) as well as a few years as regional “Scarlet Guard Herald. Amusingly, right before Their Majesties surprised me with the writ, the College of Heralds offered me a brand new, just created office, “White Scarf of Aethelmearc Herald” tasked with promoting and coordinating pageantry and heraldry for the rapier community (sort of analogous to what the Sycamore Herald does for Rattan combat). And obviously, I’ve coordinated the AE Novice tourney at Pennsic. Next year will be 15 years. And 6 on the Cadet tourney…

Simply.. I wanted to be a good enough fencer, an enjoyable enough opponent, so that people would want to continue to fence me…

Well, I still strive to be that enjoyable opponent.. And a challenging one.. With some aspects of historical accuracy. I want to be an effective vector for the rapier virus (lol). There are a few things that I’d love to accomplish. Specific tourneys I have yet to win (7 Pearls and QRC – I’m the eternal second.. Lol) I’d love to serve the Crown as Champion and/or as Captain of the Guard.. Or even as Jewel of Aethelmearc Herald someday…

The “Forget that this is a hobby = this has to be deadly serious and solemn” attitude..

This year specifically? I’d like to survive my first year as a Peer. Beat the impostor syndrome and use the new leverage for good, not evil. When they give you a bigger crowbar, you go after bigger doors. 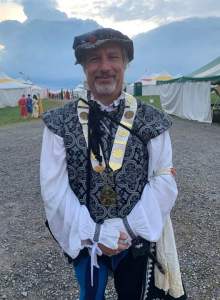 The SCA is a huge buffet table.. Try *everything*.. Try it all twice.. Then stick with what you enjoy.. Not what you think is expected, not what you perceive as a fast-track to any award. Do what makes your heart sing.

Calligraphy and illustration.. Have you seen my handwriting? Hieroglyphics!

Well.. My answer would have been significantly different a few months ago.. (smirk) Now, i would have to say either a Howling Wolf for joy and mirth (which is what I actually expected to receive when the Crown called me to kneel before Them at War Practice.. And I suspect that His Majesty knew and toyed with my expectations.. Lol).. Or a Court Baronetcy for Service…