Here continues the Record of the Second Reign of Gareth and Juliana, King and Queen of Sylvan Æthelmearc at Their Crown Tournament, May 11, AS 54, in Their Shire of Niithgaard; as recorded by THL Arias Beltran del Valle, with the assistance of Lady Casey Redmane and Lord Ronan O’Conall.

Their Majesties opened Their Court to meet those who would fight for the honor of being named Their Heir.  After the combatants and consorts had been introduced, they bid them fight well to honor the kingdom in their efforts to become the heir.

Shield Tree at the start of Spring Crown. Photo by Mistress Arianna of Wynthrope.

Their Majesties’ Court was then suspended.

In the afternoon, after the tournament:

Their Majesties invited to Them Duke Timothy of Arindale. Having emerged victorious from the field of combatants, Their Majesties named him Their Heir and Prince of Æthelmearc, and did place the coronet of his new station on his head.  Then did His Highness turn to his consort, Duchess Gabrielle van Nijenrode and place a coronet on her head, naming her his Princess. 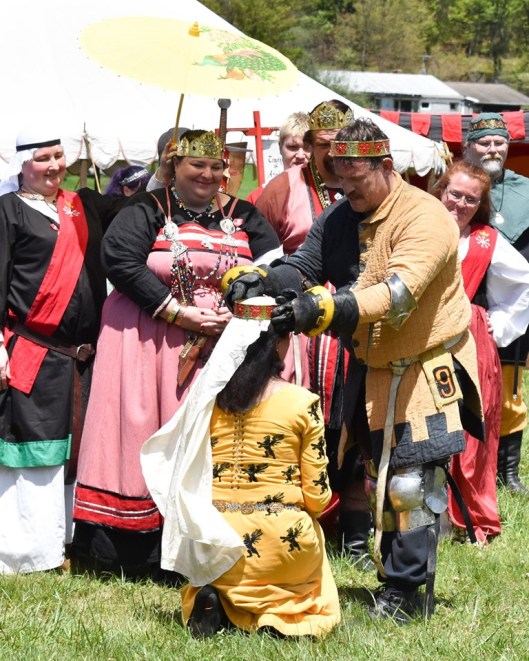 Their Majesties’ Court was once again suspended.

Their Majesties opened court as had become Their tradition by first sending the children of the kingdom forth to receive a toy, and then welcoming newcomers to the society attending their first event.

Their Majesties then invited the Ladies of the Rose and Garnet into Their Court.  They spoke highly of the conduct of the fighters in the tournament that day, and were moved to recognize three combatants among the rest, Master Jacob Martinson, Master Kieran MacRae, and Master Tigernach mac Cathail for their comportment on the day. But the conduct of one had risen to their attention over all others.  So was Master Jacob Martinson named as the next bearer of the Shield of Chivalry, and thusly was he bid to take his position in their court.

Next did THL Sophie Davenport beg a boon to speak before Their Majesties.  She drew to the populace’s attention the faithful and skilled work done by Master Liam mac an Tsaoire as Sycamore Herald, managing the heralding of kingdom tournaments with grace and skill.  But his time in that role had come to an end, and so did her Ladyship announce his new appointment as Gage Herald, and the appointment of Lord Ronan O’Conall to succeed Maighstir Liam as Sycamore.

Her Ladyship had other business to announce as well.  She announced the creation of a new office, the White Scarf of Æthelmearc Herald, to lead fencing tournament heraldry, and named Don Po Silvertop as the first holder of that office.  Since his appointment to that post would leave a vacancy for Scarlet Guard Herald, Silver Buccle named Lord Nicola Gaetano to succeed Don Po.

Joubert de la Rose was then called before Their Majesties. He has been seen on the heavy field often, and his skill at arms was noted by Their Majesties as well.  So were They of a mind to Award him Arms. Scroll by Mistress Antoinette.

Their Majesties did then summon Katie the Fearless to attend them.  As her name would imply, she too was earning renown on the field, but also for her assistance at demos.  So did They choose to Award her Arms as well.  Scroll by Mistress Antoinette. 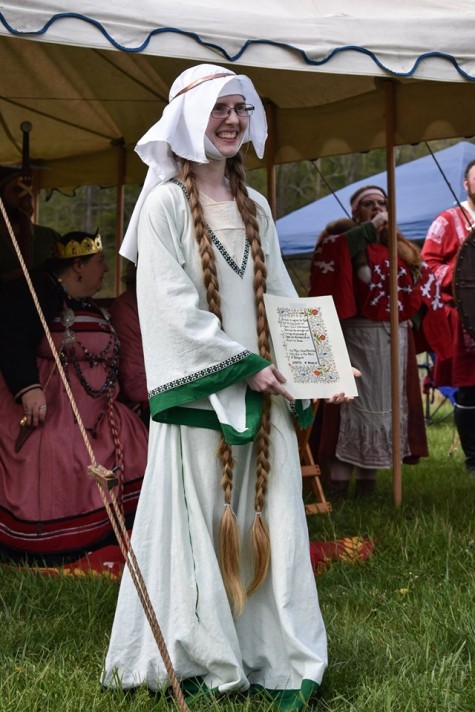 Failenn Og was next called before Their Majesties and Awarded Arms.  Failenn had helped to restart the bardic community and hosted Bardic Circle in the Barony of Endless Hills.  Scroll was a work by Mistress Graidhne.

Mikael ibn Mehlen ibn Yusuf Al-Uqlidsi was next called into Court.  Few martial skills were not known to him, nor were there many in which he could not be seen participating.  For his commitment to those arts did They name him to Their Order of the Golden Alce.  Scroll by Mistress Graidhne.

Her Excellency Shirin al-Sussiyya was next summoned to appear before Their Majesties. Her work in the Signet’s office had been, and continues to be, of great value to Their Majesties, helping to ensure that the populace is suitable recognized.  They deemed her lack of recognition worthy of correction, and so did name her to the Order of the Keystone.

Their Majesties then called her Excellency Amelia Soteria to attend them.  Tales of her kindness and work had come to their attention from many around the kingdom, sharing her knowledge with those who wish to learn from her, and offering a smile to all those she encounters.  For this work did Their Majesties add her to Their Order of the Cornelian. Scroll by Lady Nichola Beese.

Their Majesties then searched the populace for her Excellency Syele Pfeifferin, and called for her to attend them.  The search was not difficult, for Syele was known to be a crafter of excellent landsknecht garb by many around the kingdom.  So to had the Noble Order of the Fleur d’Æthelmearc noticed her work.  On their advice did Their Majesties name her to that Order. Scroll by Isabella Montoya. 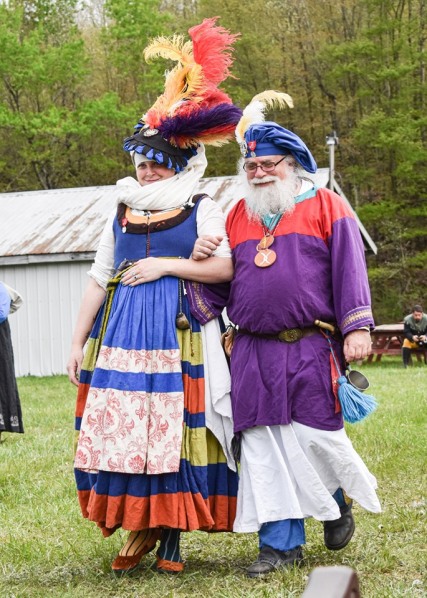 Next did Their Majesties invite Duke Ragnarr and Duchess Lynette of Atlantia who begged a boon of Them.  Their Graces spoke of one in the kingdom whose service had been long-standing in support of the society at all levels.  His Grace then asked that Duke Malcolm Duncan MacEoghainn be recognized with the honor of a place amongst the Most Noble Order of the Pelican, or he would renounce his.  Their Majesties assured such drastic action would not be necessary, and invited both his Grace Malcolm and the Companions of the Pelican there assembled to appear before them.  They then bid the Order bear him forth to consider elevation to sit amongst them.

Duke Malcolm receives a Writ for the Pelican. Photo by Mary Christine Lowe, aka Jinx.

His Lordship Cid Hiyo was next called to Their Majesties’ presence.  Her Majesty spoke of the inspiration she drew from his activities in the Society and did name him Her inspiration for the day and award him a Golden Escarbuncle. 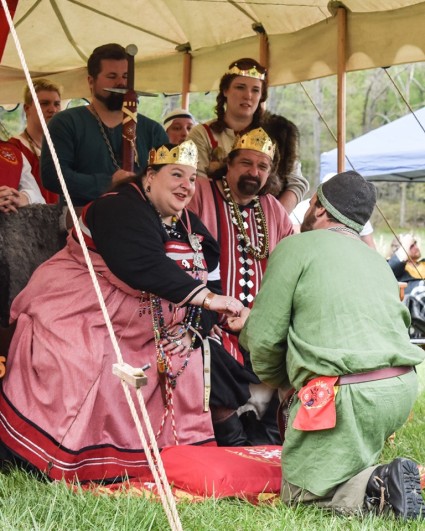 Their Majesties then asked that those who contributed their skill in art or crafting to awards handed out that day stand and be recognized by the populace.

There being no further business before Them, Their Court was then closed.