The following is the report of the Court of Timothy and Gabrielle, King and Queen of  Æthelmearc, held on the 26th day of October Anno Societatis 54 in the Shire of King’s Crossing at The Tavern Brawl, Baron Brandubh O’Donnghaile, Tabor Herald.

Their Majesties welcomed all to Their Court and summoned Lord Godfrey de Bayeux from Their Guard. They then invited all children present to come forth. They tasked Lord Godfrey with the Royal Toy Box, and then loosed the Children to each select a prize.

All newcomers to the royal court were then invited to come forth and Their Majesties gifted each with a cup so that they could remember their time at the event, and come back to share a drink.

Baroness Elena de la Palma was then invited forward. She spoke about the effort of the AE Leads. The AE Leads is a committee within the Kingdom which is dedicated to encourage the growth of our society. One of the initiatives that is being championed is tokens of appreciation. The AE Leads Committee will be providing tokens at each event so that all members of the populace can use them to show their appreciation to any that they see providing service. Baroness Elena invited everyone to look at the Troll Tables at upcoming events for the tokens of appreciation and take as many as you wish to give to any gentle in thanks for their service.

King Timothy and Queen Gabrielle then invited Lord Jodocus van Cleeff to attend Their Court as the Autocrat of the event. Lord Joost thanked all who attended the event, and all of his staff who made the day a success, especially Their Graces Gareth Kincaid and Juliana Delamare for running the all-day side board. The cooks in turn invited all present to stop by the kitchen for leftovers.

His Majesty then called for the Mistresses of the List to come forth Viscountess Lucilla de Courtenay, and Meestress Odriana vander Brugghe. His Majesty Timothy had conducted a Heavy Weapons Round Robin Tournament, and he thanked the good Ladies for their invaluable assistance. They then announced that Sir Oliver Sutton had been the winner of the Tournament that day.

Mistress Chrestienne de Waterdene was then invited to speak of the Arts and Sciences happenings of the day. She thanked the many and various artisans who had entered the Arts and Sciences display that day, and also thanked Maestro Zanetto da Como who had organized the classes and the teachers that day.

Their Majesties then called forth Lord Heinrich Holzapfel von Herxheim. Their Graces Gareth and Juliana had Awarded him Arms in absentia, and so they presented him to the populace as Lord Heinrich.

Lord Alfonso de Santo Domingo was summoned back into Their Majesties’ Court. Beyond serving as a marshal, Lord Alfonso had demonstrated his skill as an archer, and so Their Majesties recognized his achievement of the rank of Master Bowman. Scroll by Lady Murdia Drusilla Vettia Portia.

Timothy and Gabrielle then called for Lady Ceindrech verch Elidir to attend Them. They spoke of her service large and small – from copying the Æthelmearc song books to service as a youth marshal. They then summoned forth Their Order of the Millrind, Granted her Arms and named Ceindrech to their number. Scroll by Lord Owen Tegg and Lady Nicola Beese.

Her Majesty Gabrielle then spoke of a gentle that She had seen all over the event that day. Lady Brianna Eileen Taithlach had baked scones for the event, made banners, and taught dance. For this Her Majesty presented her with a Golden Escarbuncle and named her the Queen’s Inspiration.

The scribes who had contributed to the glory of Their Majesties court were then invited forward. Each had spent hours of their time and resources to prepare the magnificent scrolls for Their Majesties’ Court, and each were given a token from Their Majesties’ hand.

Their Majesties did then demand that Lord Owen Tegg stay in Their Court and summoned Their Order of the Fleur d’Æthelmearc to attend. Lord Owen’s skills at illumination, his teaching, and research into 14th Century manuscripts had earned him a place among that that Order. So did Their Majesties induct Owen as a Fleur and Grant him Arms. Scroll upon Parchment by Mistress Abigail Kelhoge, Illuminated by THLady Rachel Delicieux, Calligraphy by THLady Ceindrech verch Elidir, and Text by Baron Brandubh O’Donnghaile. 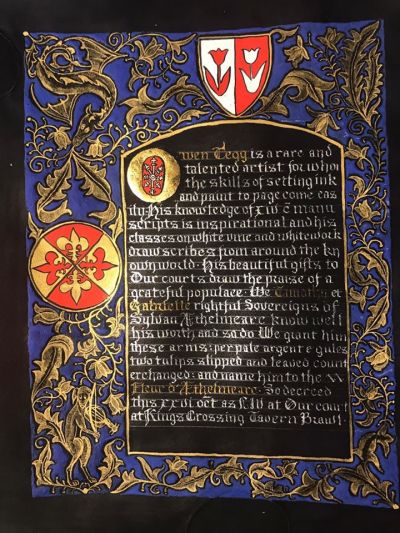 There being no further business, the Court of Their Majesties was closed.