The Viking origins of our modern Christmas
By Elska á Fjárfelli, of the Dominion of Myrkfaelinn

We’ve all been to a Yule-themed event at some point. And most of us are aware there is some sort of connection between Yule and Christmas. What I was surprised about is how many of our Christmas traditions hail back to Dark Age customs! All the way back to its roots, Yule is a mid-winter festival celebrated by the Germanic people. The winter and summer equinoxes, as well as the autumnal and spring equinoxes, played important roles in many pre-Christian cultures. The celebrations were a way of marking time, as well as a way to honor the ancestors and the gods. And at first, the time of yule, called Yule-tide, lasted somewhere around two months between mid-November and early January.

One of the most recognized solstice monuments, the Neolithic Stonehenge and its partner Woodhenge, are physical remnants of such time-marking celebrations. The wood circle was oriented towards the setting sun on the midwinter solstice, opposite to the stone circle, which was oriented towards the midsummer solstice, and both are linked to each other by a processional route. It is speculated that woodhenge, which had no evidence of human burials but plenty evidence of copious feasts, represented a “land of the living” while Stonehenge, with evidence of human burials and built of ever-lasting rock, represented a “land of the dead.” While Stonehenge and Woodhenge are quite unique, structures to mark the solstices have been found throughout the ages and in many cultures, including in Scandinavia. Not all that surprising: Scandinavian winter days are rather short and winter nights very, very long, making winter solstice celebrations seem like rather a good idea!

Viking Age Scandinavian festivals included many different rituals and celebrations, many of which are still around today. For instance, the Vikings has festivals resembling our Halloween – well, more like the Mexican Day of the Dead or the Irish Samhain than our modern Trick-or-Treat kid’s Valhalla, but you get the gist. Viking Halloween consisted of Alfablot, a private celebration for the family’s ancestors and the family’s life force, and the public feast Disablot. The Disablot festival happened during the “three days prior to winter” and is believed to have been held to wish for prosperity for the upcoming season. The Vikings also celebrated a festival known as Yule. Many customs of the Yuletide tradition are quite similar to our Christmas.

And this is not a coincidence, as many of the customs and traditions celebrated under the umbrella of modern Christmas in fact originated from the Yule celebrations of the Vikings. To make it easier to convert pagans, the church declared the Birth of Christ to have taken place during the Roman holiday of Saturnalia, to help smoothen the transition to Christianity. As the holiday or Saturnalia coincided with the winter solstice, this also happened to be the time the people of Scandinavia celebrated Yule. The winter solstice marked the longest day of the year and the slow returning to light and the winter solstice celebration lasted for twelve days. The Christian Christmas celebrates mankind’s movement from darkness into the light, and the twelve days of solstice celebration became the twelve days of Christmas.

Let’s take a closer look at those iconic Christmas symbols, starting with the Christmas tree:

The Christmas Tree
Because evergreens were still green during winter where everything else is dormant (visually dead), evergreen trees embodied the life of the forest, the country, and reminded the people light would return. Vikings would display the still-green tree during the Yule festivities and often decorate it with statues of gods, food and bright colored clothes, in an attempt to appease the spirit of the land so it would return to green again.

The Christmas wreath
The Yule wreath was not the gentrified home-décor accessory it is today. A Viking Yule wreath was a giant wheel that would be set on fire and rolled down a hill, to wish for the return of the sun. Depending on geography, this would be a literal appeal, as in certain parts of Scandinavia the sun literally does not rise for several weeks in winter. How intimidating this darkness must have been!

The Yule log
We might only know the Yule Log as a delicious rolled cake, meant to resemble a wood log. In Viking time (and quite a bit after) the Yule celebration included a symbolic fire, the burning of large logs on the central hearth of the longhouse. The yule log symbolized the continuation of light despite darkness – thus, obviously, the bigger the better. The Yule log was meant to burn for days throughout the Yule celebration, and was often made of oak and draped with evergreens like holly and fir. The log could be carved with runes to wish for protection of the gods and a piece of the log could be saved to start the house fire in the new year, to protect the house and household. 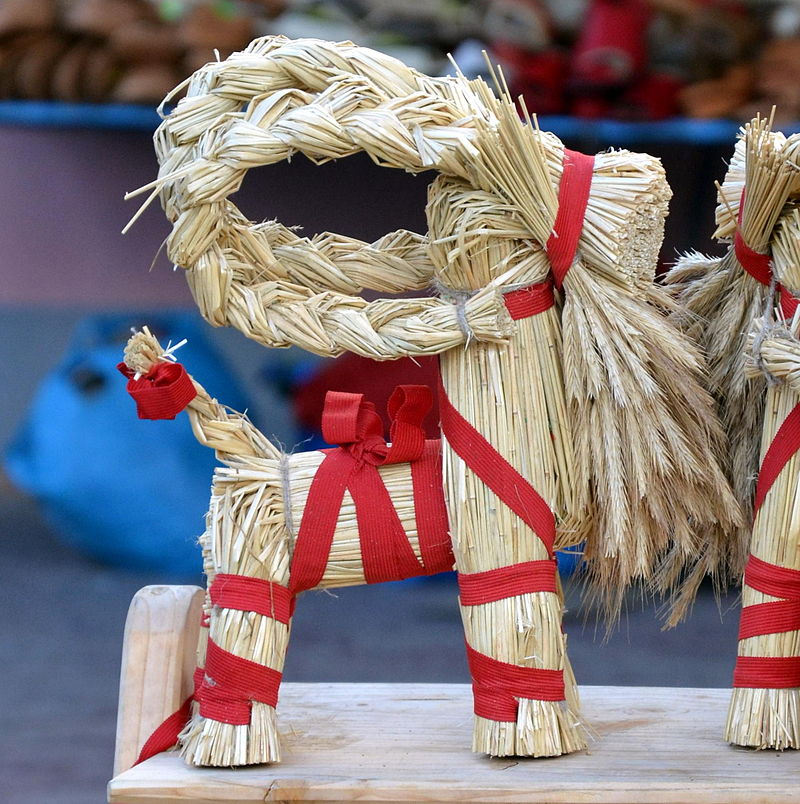 The Yule Goat
A lesser known custom of Scandinavian Yule is the Yule Goat. In modern tradition it is often artfully crafted from sheaves of wheat and makes a perfect decoration for the Yule tree. In the Viking Yule the Yule Goat was rather important and personified the pair of goats belonging to Thor, god of thunder and lightning. The harnessed goats pulled Thor’s chariot through the sky, making the sound of thunder in their wake. Another incarnation of the Yule Goat tradition sounds more like Halloween meeting Christmas: young men would wear goat skins and go from house to house, singing. In return, the goat-men would be rewarded with food and drink.

The Christmas Ham
During the Yule celebrations various plants and animals were sacrificed to pay tribute to the gods. The sacrifice and eating of a boar to appease Frey, who together with his sister Freya symbolized fertility, is thought to have inspired the traditional Christmas Ham.

Santa and Odin – Christmas and Yule; from Sons of Vikings

Old Man Winter
Although the modern incarnation Santa Claus has more in common with the Dutch winter celebration Saint Nicolas, both seem to harken back to the Scandinavian Old Man Winter. In Norse tradition the gods frequently came down from Asgard to fraternize with the locals, mostly in disguise. Thus, Vikings always welcomed Old Man Winter – a dressed up local, or perhaps not? – into their home when he visited and he would join them in their feast. Many would think, or perhaps hope, the Yule Old Man really was Odin in disguise, traveling around wearing a hooded cloak, riding around on his majestic white horse Slepnir.

Mistletoe
Scandinavian mythology tells the story of Frigga, the mother of the slain Baldr. Thought to be the most beautiful and blessed of the gods, Baldr was protected by a spell against all weapons. In a devious scheme orchestrated by Loki, he was killed by a branch of mistletoe. Frigga resurrected her son Baldr when her tears over his demise stained the then-red berries of the mistletoe white; her tears providing the “kiss of life.”
Recently, the theory has been put forth that Christianity was relatively assimilated by Scandinavian culture as the story of Christ’s resurrection and that of Baldr, the beautiful and blessed son of the All-Father, was so much alike.

Halloween and Christmas are two of my favorite family traditions of the year. I think it is wonderful our modern society, often so distanced from our agricultural roots, still celebrates the bounty of the harvest, the shortest day, the end of yet another growing season. I enjoy the traditions’ ancient roots, and the deep connections between different cultures. Even our languages are connected: in Old Norse, the Yule festival was known as “Jól,” with variations. Etymologists surmise the English word “jolly,” meaning festive, has its roots in the Norse word “Jól!”

Therefore: Jolly Holidays, to you and yours!