Here begins the Chronicles of the Courts of the Fourth Reign of Timothy and Gabrielle, King and Queen of Sylvan Æthelmearc, held on the twenty-third day of November, AS 54 (2019), at Fabric, Fiber, and Fighting, in their Shire of Abhainn Ciach Ghlais. Submitted by Lord Snorri skyti Bjarnarson, Jewel Herald of Æthelmearc.

During morning court, at the fighting field.

After a bit of misdirection and subterfuge, to keep the target of their plans distracted, Their Majesties summoned before them His Lordship Bors of Rouen. King Timothy, saying that he could no longer countenance being beaten so soundly by an unbelt, presented THL Bors with a Writ to Contemplate Elevation to the Order of the Chivalry, done by Baron Caleb Reynolds with words by THL Shirin of Susa, and there was much cheering.

There being no further business, court was suspended until such time as Their Majesties desired.

That evening, after a day of fine fellowship, considerable classes, and first-rate food, Their Majesties did again call all gentles there present to attend Their court.

After greeting the populace and bidding them seek their comfort, Their Majesties first called before them all newcomers present, and gave to them each a gift of a cup to drink from.

After that, leave was given to Her Excellency Elena de la Palma to address the populace regarding the AE Leads program of service to the kingdom.

Their Majesties next summoned before the throne Lady Annika Iosafova, Their Bagatelle, who spoke to the populace concerning the day’s largesse derby, and the many wonderful donations that were given as part of it.

Lady Annika thanks the populace for gifts of largesse.

Baroness Rowena ni Dhonnchaidh then begged a moment of the crown’s time to present to Them a new day shade she had sewn for the kingdom.

The unofficial business of the court being concluded, Their Majesties had called to Them Christobell of the Woods. They spoke of her work to support the shire, doing many thankless tasks, and so saw fit to Award her Arms, with a scroll by THL Sebastianne la Rousse. 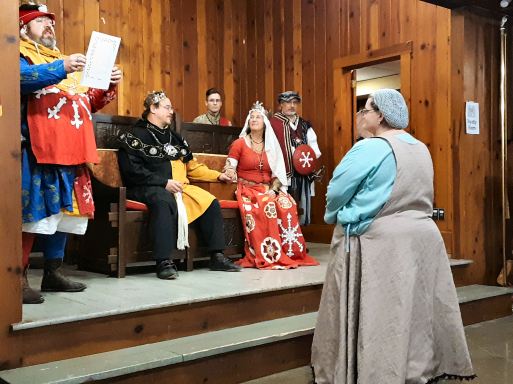 Next, Their Majesties summoned Lady Fede di Fiore, and spoke glowingly of her efforts in the making of period garb. Because of this work, they felt it right and proper to induct her into the Order of the Sycamore, with a Brobdingnagian scroll by THL Sasson de la Sancta Victoria.

After that, Their Majesties called for young Lord Draven Hastings, and spoke of his constant and unceasing service to the crown as a retainer, and so made him a member of the Order of the Keystone. 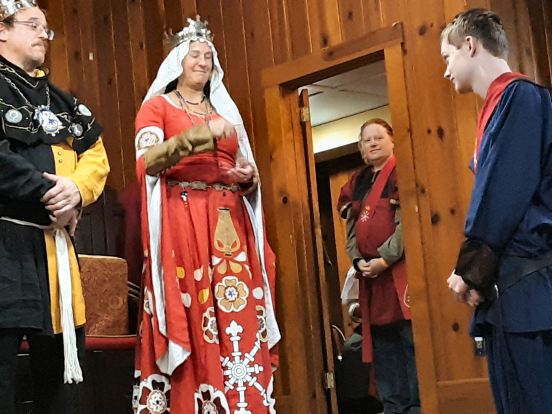 That being done, Their Majesties called next for Lady Magdalena Txoperena. They spoke highly of her efforts at garb-making, and so deemed it just to add her name to the rolls of the Order of the Sycamore, with a scroll by Lady Fede di Fiore.

Spying Lady Ania Mhoireach in Their court, Their Majesties had her summoned to Their presence. Word had reached them of her efforts in leather work and illumination, and They saw her good works in these fields, and so named her a companion of the Order of the Sycamore, with scrolls by Mistress Lucretia di Cosimo and Master Po Silvertop.

After that, Their Majesties had called forward Lord Amano Zenjirou Nakatsune and Lady Oribe Tsukime. They noted their stellar appearance and comportment, and so saw fit to name them to the Order of the Golden Mirror. 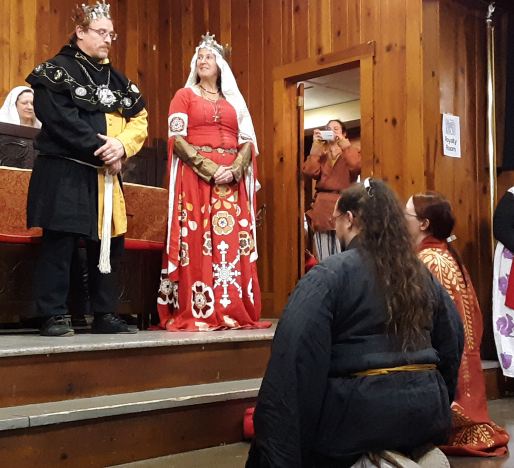 As these good gentles made to leave, Their majesties bade Lady Oribe Tsukime remain a moment longer. Their Noble Order of the Fleur d’Æthelmearc was called forward, and, voicing their acclaim, Lady Oribe was made The Honorable Lady Oribe Tsukime, and her name added to their rolls, with a scroll by Lady Murdia Drusilla Vettia Portia with text by Mistress Phiala O’Ceallaigh. 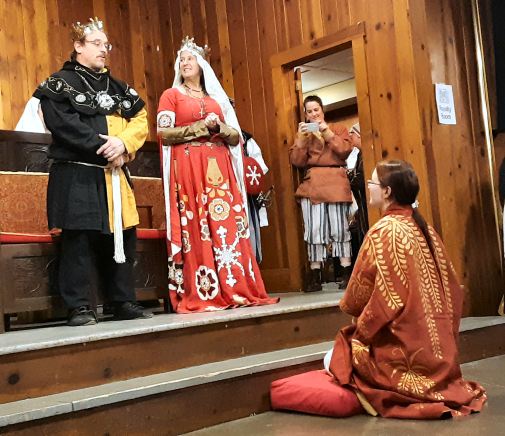 Lady Oribe is inducted into the Fleur.

While Their Fleurs were present, Their Majesties desired to add another to their number. Lady Sebastianne La Rousse was called forward and made the newest member of the Fleur d’Æthelmearc, with a scroll by Lady Bubba Blackhammer.

Lady Sebastianne is inducted into the Fleur.

Next, Their Majesties decided that the Kingdom needed to recognize the efforts and works of Lady Etain ingen Ruaidhri. Calling Their Most Noble Order of the Millrind to Them, they received their acclaim, and so inducted Lady Etain into their order.

Lady Etain is inducted into the Millrind.

That being done, Their Majesties demanded the presence of Her Ladyship Rhenna de An t’Eilean Dubh. They spoke of her many years of service, and then had called forward Their Most Noble Order of the Pelican. This Order expressed their desire to have Her Ladyship as one of them, and so Their Majesties issued to her a Writ to contemplate elevation to the Order of the Pelican. 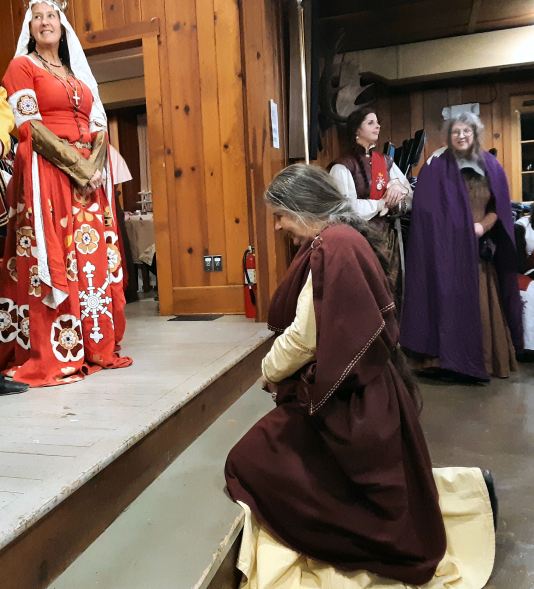 Her Majesty then spoke of the day’s events, and had called to her Mistress Elyse la Bref, and named her Queen’s Inspiration for the day, and awarded unto her a Golden Escarbuncle, tinted red for service.

Finally, Their Majesties called forward all scribes there present who had contributed to the award scrolls given that day, and gave unto them each a token from Their hands.

There being no further business, court was closed.

All photos by Mistress Arianna of Wynthrope except the picture of THLord Bors, as noted above.