Every year, in the beginning of December, the Shire of Coppertree gathers at Warrior Archery in Sherrill, NY, to hold their annual Holiday Shoot for the archery community. Consisting of a dozen targets downstairs, and a “wild game hunt” of 3D animal targets upstairs, the shoot runs from a bit before lunch to about 3 PM, with a hearty dayboard served all afternoon. For non-shooting attendees, they offer an A&S salon, where people can gather and work on projects, teach impromptu classes and demos, and enjoy fellowship with other artisans.

The “Save Christmas!” range, developed by Lord Snorri – photo by Baroness Amalie Reinhardt

Each year’s shoot has a theme, and this year’s was “Save Christmas!”. A dozen hand-painted targets were made, each with a classic Dungeons & Dragons monster trying to make off with a piece of holiday loot: presents, candy canes, even Christmas trees! Each one was a friend-or-foe target – you needed to hit the monster without hitting the holiday swag, or you’d lose points. Four of the twelve targets were also timed ends; archers had 30 seconds to shoot as many shots as they could.

Photo by Robert of Ferness

One of the hallmarks of the Coppertree Holiday Shoot are the lovely prizes: scrolls (by Lady Vedis Aradottir) and trophy arrows for the winners, and a table of prizes for the runners-up, with donations by several well-known SCAdian artists, including THL Robert of Ferness, Mistress Elska a Fjarfelli, and Lord Snorri skyti Bjarnarson, as well as garb accessories from Sister Marykate at LARP Essentials. Even the Marshals are well-rewarded, this year receiving hand-woven trim pieces and bolts of red brocade cloth for their hard work.

This year’s Holiday Shoot was also the Kingdom Archery Championship tournament. The outgoing Champion, Lord Snorri, chose to use the shoot itself as the qualifier, and the top twelve finishers (who were subjects of Æthelmearc and desired to compete for the championship) got to continue to shoot for the pleasure of Their Royal Majesties Timothy and Gabrielle, who were in attendance and shooting!

First, Second and Third place trophies, plus a special Championship trophy; courtesey of Lord Snorri and his fabulous woodworking father.

The first round of eliminations was grueling, and took nearly two hours of competitive, cut-throat shooting to winnow the field of hopefuls down to eight, and ended with a high-stakes, one arrow shootout between young Mary of Harford, and Celsus of Delftwood. Mary emerged victorious, and after that, things went quickly. The next round had all eight of the archers shooting together in a 40 second timed round, at six 3D animal targets. Each one needed to be hit once in order to advance to the final round. Three of the eight archers advanced: Lord Ronan a Conaill, THL Robert of Ferness, and Baron Edward Harbinger – His Lordship Robert’s advancement was particularly noteworthy, as he was shooting period equipment (a sixty pound longbow) and in full archer kit: helmet, gambeson, etc.

Those three worthies then engaged in another timed contest, this time 30 seconds, at three paper targets, 20 yards away. One of these was a standard 24” Royal Round target, but the other two were period target faces from the Luttrell Psalter. As an added wrinkle, all three targets must receive a scoring arrow from an archer if that archer’s scores are to count at all. All three archers shot well, but in the end, Lord Ronan was victorious, and was chosen by Their Majesties as Their new Archery Champion. 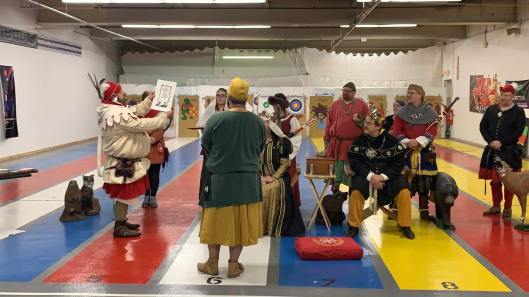