Over a dozen bards performed their best in the wonderful acoustic Masonic Temple hall that served as a beautiful medieval backdrop to their different performances at Kingdom Twelfth Night in St. Swithin’s Bog.

The hall was well filled and I felt honored to be one of spectators present at this special event. Hersir Torvaldr Torgarson had organized this years’ competition after winning the honor of representing the Bardic Arts for Æthelmearc last year and it was quite the show. Each entrant could choose to perform either something about Æthelmearc or what they thought of as their best work. This was my first Bards of the Sylvan Kingdom Championship, and if this is what happens each year I sure have been missing out! As I quite enjoyed the different performances, I thought perhaps you would to, so I made a list of who did what for you to see what you missed… Enjoy, and perhaps we’ll see each other at next years’ event, organized by the newly minted Sylvan Bard Éadaoin Ruadh. 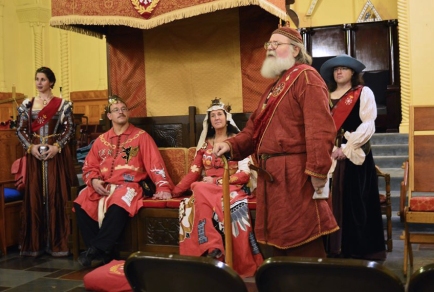 Hersir Thorvaldr opened the competition after a short welcome to everyone competing and otherwise with a moving piece he wrote himself called the “Ballad of the Lonely Norseman.” Visit the Book of Faces post for the lyrics, or see the Moving Pictures here (Melody and lyrics by Thorvaldr, instrumental by Valadonis Stareagle)

Then THL Magge Illefoster, a Sylvan Bard of the past herself, blessed us with a wonderful rendition of the “Rose of Arindale” which she wrote in honor of Queen Gabrielle, as she was once again present to judge those true and worthy.
For more on the song click here

Kicking off the competition was Master Dagonell the Juggler, who performed “Paintin’ Flowers” as a filk to “Countin’ Flowers” by The Statler Brothers. Dagonell dedicated the song to Baroness Ekat, for putting the earworm in his head in the first place!
Visit the Book of Faces post for the lyrics

A most surprising performance was given by Bran o’Labradha with “Perche dolce caro bene” – quite singularly my favorite, but then I do have a weak spot for classical guitar. Singing both the male and female parts, in Italian, while accompanying himself by guitar, was fantastic, even if the experience left Bran a wee bit shaken!

Lord Éadaoin Ruadh stole the day with his performance of a song called “Towton’ s Creek,” his filked version of “The Green Fields of France,” to cover the Battle of Towton from the War of the Roses, and which had the spectators humming along with him.

THL Alianora Bronhulle sang with a song “Raise your glass (to the Lady fierce and true)” – a fun song that made us all chuckle out loud!

Keris Silber sang the beautiful “My Sylvan Home.”
Visit the Book of Faces post for the lyrics

Lady Nicola Beese had us grinning with “Fortune my Foe,” a song about angst, and who does angst better than the Elizabethans, Lady Nicola implored us!

And Wulfflaed on Hehstaldes closed the performance with a heart-warming rendition of the traditional holiday song Oh, Tannenbaum, in German.

Hersir Torvaldr Torgarson then thanked all the entrants for their passion for the bardic arts, and for making the task in choosing his successor so difficult. Vivant, all bards of Æthelmearc!

Interested in the Bardic Arts?
Follow the bards on the Book of Faces at the College of Æthelmearc bards

All photography by Tristyn (Jean H. Keene), thank you!