All of the black manuscripts that we know about were made during the time of Philip the Good and Charles the Bold  from Burgundy, but only seven survive today; among them are the Morgan Black Hours, the Black Hours in the Hispanic Society in NY, the Black Hours of Galeazzo Maria Sforza in the Austrian National Library in Vienna, and select pages in the Hours of Mary of Burgundy in the Austrian National Library.  The Morgan Black Hours (MS M. 493) was made in Bruges, then part of Burgundy, (modern day Belgium), in 1475-80 by an Anon. artist in the circle of Willem Vrelant.  The book measures 17×12 cm (approx. 6 ¾ x 4 ¾ in.) and has 242 pages with 14 full page miniatures.  It is written in gold and silver ink with opaque pigments that stand out from the black parchment.

The black dye process makes the parchment unstable.  Instead of lasting for two thousand years, most black parchment will only last for a fraction of that; an estimated 50-600 years and considering that half of the surviving manuscripts are in poor condition that is an accurate estimate.  The Morgan Black Hours are currently undergoing conservation to see if the paint can be stabilized as the parchment has become brittle.

The Morgan Library says that this vellum (1) is smooth and shiny.  Looking at the digital images, you can see some cracking on the paint, and flaking or uneven uptake of the black on the parchment.  Some of this may be due to wear and tear, but I think most of it is original and reflects the natural textures of the surface.  Facsimile Finder and Wikipedia both claim that the parchment was dipped or soaked in an iron-copper solution, which is possible as that follows some black leather dye recipes of the time, but judging by the look of the finished product, I would say this was painted on in layers as per Cennini’s instructions.

Dipping can be a problematic process at best, and disastrous at worst; other parchmenters have tried dipping without much success and it is not recommended as it creates a big mess, uses a large amount of dye/ink, and leaves the parchment with a bad texture that is difficult to work on.

Below are Cennino d-Andrea Cennini’s instructions from Il Libro del Arte (translated by Daniel V. Thompson Jr.), written in the late 1300’s, and rearranged by me for process clarity.

“When you want to tint kid parchment, you should first soak it in spring or well water until it gets all wet and soft. Then, stretching it over a board, like a drumskin, fasten it down with big-headed nails, and apply the tints to it in due course, as described above” (below).

(He gives instructions on how to mix colored ink).  “Then take a large paint pot, big enough for these ground colours, and put in enough of this size to make it flow freely from the brush. And choose a good-sized soft bristle brush. Then take that paper of yours which you wish to tint; lay some of this tint evenly over the ground of your paper, running your hand lightly, with the brush about half dry, first in one direction and then in the other. And put on three or four coats of it in this way or five, until you see that the paper is tinted evenly. And wait long enough between one coat and the next for each coat to dry. And if you see that it gets shriveled from your tinting, or horny from the tinting mixture, it is a sign that the tempera is too strong; and so, while you are laying the first coat, remedy this. How? –Put in some clear warm water. When it is dry and done, take a penknife, and rub lightly over the tinted sheet with the blade, so as to remove any little roughness that there may be on it.
If it should come about that the paper or parchment is not smooth enough to suit you, take this paper, and lay it on a walnut board, or on a flat, smooth slab; then put a sheet of good clean paper over the one which you have tinted; and, with the stone for burnishing and working gold, burnish with considerable strength of hand; and so, in this way, [p. 10] it will get soft and smooth.” 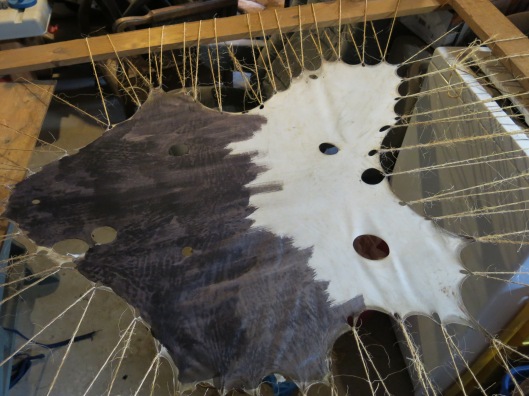 Process:
I received the hide of a downed sheep (that means it died in the field), and it was filthy.  The hide was full of holes and discolored on the flesh side.  I fleshed (2) and dried it, then soaked it in water for a week to remove as much dirt as possible (at which point it froze, and fortunately absorbed the tannin (3) that would become necessary to make good black parchment – I did not know this at the time).  Then I prepared the parchment as per Theophilus’ instructions.

Theophilus, a 12th Century scholar offers a set of instructions:

“Take goat skins and stand them in water for a day and a night. Take them and wash them until the water runs clear. Take an entirely new bath and place therein old lime and water mixing well to form a thick cloudy liquor. Place the skins in this, folding them on the flesh side. Move them with a pole two or three times each day, leaving them for eight days (and twice as long in winter). Next you must withdraw the skins and unhair them. Pour off the contents of the bath and repeat the process using the same quantities, placing the skins in the lime liquor and moving them once each day over eight days as before. Then take them out and wash well until the water runs quite clean. Place them in another bath with clean water and leave them there for two days. Then take them out, attach cords and tie them to the circular frame. Dry, then shave them with a sharp knife after which leave them for two days out of the sun. Moisten with water and rub the flesh side with powdered pumice. After two days wet it again by sprinkling with a little water and fully clean the flesh side with pumice so as to make it quite wet again. Then tighten up the cords, equalize the tension so that the sheet will become permanent. Once the sheets are dry, nothing further remains to be done.” (Reed, 1975, p. 74).

I rinsed it as well as I could and tried a second fleshing on the beam to remove the stains from the flesh side.  They did not come out.  The finished parchment felt lovely, so I decided to dye it.

Ceninni emphasizes how important it is to use a dry brush.  He is working on pre-cut sheets, re-stretched tight like watercolor paper.  I left the parchment on the original stretcher rather than waste materials re-stretching and re-cutting.

I used a softer hog bristle brush and iron gall ink as I had a lot on hand. I brushed the ink on both sides in one direction quickly, letting it dry flat on each side.  Then I repeated perpendicular to the first application and let each side dry again.  I applied the final coat on the diagonal and let everything dry overnight. 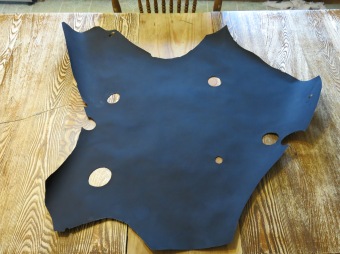 It was critically important to keep the ink coats light and dry, because too much moisture caused softening and a permanent gasoline-like stain where I accidentally dripped, even after trying to sop it up.  In subsequent experiments with other inks & dyes this has held true, so this is why I doubt the dipping theory – too much liquid is a recipe for disaster on parchment.

I cut the black parchment off the frame and made it into 8×10 sheets.  I made the mistake of using a metal ruler, which left silver-point lines on the parchment. I used the offcuts to patch holes with a small amount of commercial hide glue; some patches were more successful than others. This is one of the most even pieces of parchment I’ve made to date (March 2019).

Several people have worked on this black parchment with varying degrees of success.  It has a slightly chalky texture, which creates a bit of drag on brushes & pigments, but it seems to be relatively user-friendly.  The gold watercolor took beautifully; the cobalt blue watercolor needed titanium white to show.  I will definitely try again, though with more purposeful use of tannin next time.  Test swatches show that the uptake is not as good without the mordant. (4)

(1) I will refer to this as parchment from here on out because all vellum is parchment but not all parchment is vellum; vellum being from calf exclusively.
(2) Fleshing is the process of removing any remaining tissue from the inside of a hide or pelt.  Once that is done the hide can be frozen, salted, dried, or moved on to the next stage.
(3) Tannin is used as a mordant to help iron-based dyes adhere to fabric and leather.  I inadvertently mordanted this hide, which allowed the iron to chemically bond to the tannin, creating a near-perfect black substrate.
(4) A mordant is a chemical treatment to fiber (in this case skin) that allows a molecular bond between the dye and the fiber. It “fixes” the color in place.  Without tannin, the iron does not bond as easily to the parchment.