I decided to do this project after Sir Ulrich sent me an image of the brass effigy of Count William Clito and several pictures of similar helms to ask if I could make him one.

It looked like a fun project. Count William was born in Rouen in 1102 and died in July 1128. From the brass effigy and looking at other Norman/crusades era helms from the period I decided on a spangen style construction with supports in the center of each section. The helm looks as if it was made to wear over a coif with the ocular protecting cheeks and nose to the the upper lip.

Construction process:
This helm is a duplicate of the one I just finished for Sir Ulrich.

2. After cutting the brow band, transverse band, inverse bands and reinforcing straps, I marked them for rivet placement, curved them, and dished them, then riveted together the frame. I used solid steel rivets and peened them with my shaping hammer.

3. I cut the quarter plates for the helm. They are a roughly triangle shaped piece made to fit in the frame. I dished them until they fit the frame and trimmed them to fit cleanly.

5. I cut 8 crosses from a brass sheet and riveted them into the 8 sections of the top.

6. I attached an ocular or mask similar to the one on the effigy. I made mine of Chromoly steel trimmed in brass.

7. I then polished the whole piece for display.

The Norman Half Helm based on Brass Effigy of Count William Clito, as seen in the Kingdom 12th Night Arts & Sciences display.

I plan to add things to this helm later to make it legal for SCA heavy fighting.
They will be as follows:

8. Cheek plates and back slats will be added to make it SCA legal. They will be hidden under a chain drape to more closely match the look of a helm over coif appearance.

9. I will drill all the holes for strapping and attaching the drape before hardening the steel. It would be much more difficult after the hardening process.

10. The steel I used is an alloy called 4130 Chromoly steel. It is similar in strength and work ability to the high carbon steels that the better armor in the period was made from. It can be hardened and spring tempered. I chose it because it can be made strong enough for SCA combat at thicknesses similar to period helms (whereas most mild steel and stainless helms are far thicker for SCA than their period counterparts). I will heat it to 1500 degrees for 5 minutes then do a cold water quench. This will harden the steel to a brittle state. I will then heat it to 450 degrees for 30 minutes and let it cool. This tempers the steel so that it is no longer brittle but very strong and springlike.

11. After it has cooled, I will soak it overnight in vinegar to remove the scale from hardening and tempering then polish with a cloth and polishing compound.

Most armoring techniques we use today are guesses extrapolating backwards from looking at surviving pieces, using modern techniques that do similar things. The making of armor was a trade secret passed from master to apprentice; rarely was anything written down. 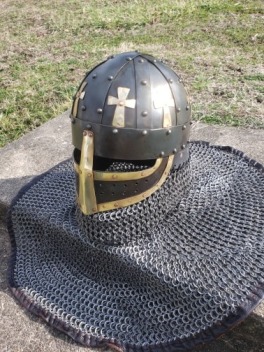 The finished Norman Half Helm, ready for action.