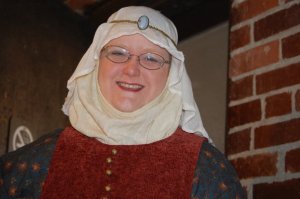 I had started Marshall University in Huntington, WV, and met a girl from near my hometown and we became friends. She was very popular with the guys, and she met one young man she was head over heels over. He invited us to his foster-dad’s house, and they were Scadians, who were trying to find people to help start a Shire in Huntington. I had read Norse and Greek Myths, as well as The Hobbit and LoTR when I was in Jr. High, so it was love at first sight for me. 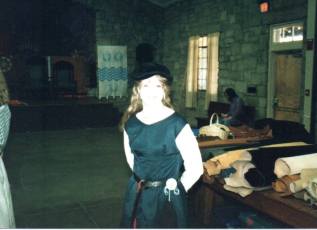 Where did you start?

As I said, the Huntington WV locals were trying to start a Shire, and needed people to fill out the Officers. I was listed as the Chronicler, but I had a lot of help from the more experienced Scadians to figure out what I was doing. I learned a lot, and it was the start of me volunteering for whatever needed down. Port Oasis still has a special place in my heart, although many of those who started the Shire are now gone.

What was your first event?

My first event was an SCA Wedding between Tavis and Teamhair, which somehow wound up a Royal Progress for the recently crowned Prince & Princess of Æthelmearc. It was my first Court, my first experience with dancing, and, unfortunately due to a drunken gentleman who was attempting to headbutt everyone around him to show them the steel plate in his head, the first time I met Count Sir Jehan de la Marche. He was suddenly there to rescue me and escorted me to a place where I was safe and spent several minutes making sure I was going to be okay. The drunken gentleman was escorted to somewhere he could sober up under supervision. 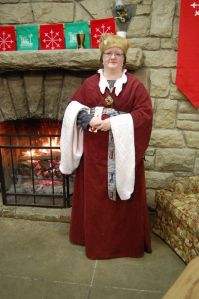 Late 12th Century Scots, although I have slid up and down from 11th to 13th depending on what I wanted to wear.

Blame my sense of Family, and their Scots-Irish roots. My maternal grandmother was a McClung before her marriage, and my family always went to the McClung Family Reunion every summer. So I decided to honor them by taking the name. However when I went looking for the name it wasn’t in period, so, I found “Luin” (sea), and added the Mac, and for the heck of it threw a ‘G’ at the end. Mac Luing. Perfect Scottish name, for Kathryn MacLuing of the Clan MacLuing (even if there’s just one of me. Blame Bloody Longshanks for that.)
Amusingly, there’s a story in my family that says we’re related by Marriage to James, King of Scots.

Once upon a time, I was part of the House of the Drunken Badgers. I don’t think any of them are around anymore. I’m friends with people in several different households, but I’ve yet to be asked to join any of them.
On the other hand, I am a founding member of Port Oasis, a founding member of the defunct Shire of Lofty Mountain, and a Founding Member of the Barony of Blackstone Mountain. I’m rather proud of that.

I once again living in my hometown, and worked the last two rafting seasons at a local rafting company. Not much to do in winter, but I’ve got some of the best scenery in the world. 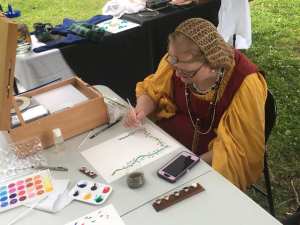 I think I should say what haven’t I done, as I’m a jack of trades. I have been a bard, I have been a dance mistress. I have tried using a drop spindle, I have gotten decent with a lucet. I have helped people create their Heraldry, helped them learn to sew, made them stuff, and gifted them things. I am a scribe, and some years 90% of the scrolls for the Barony are by my hand. I sometimes get a chance to throw knives, and sometimes shoot my bow. The only thing I haven’t done is fight. They put me in heavy armor, threw a shot my way, and I flinched so badly I dropped my sword. They didn’t even hit me, I flinched that hard! So, I don’t fight, and I don’t fence, because I don’t want to get hit.

Tell us a little bit about your SCA experience (jobs, offices, duties, etc.):

Thirty years is a long time, and since I can’t stand seeing something left undone, I tend to volunteer a lot. As I said above, I was Chronicler of Port Oasis. When I moved and helped found the Shire of Lofty Mountain, I was again Chronicler. When the Barony was incipient, I was deputy Chronicler. I moved again, to the Shire of Riversmeet, and became … Chronicler, then MoAS, then Seneschal. After I came back in 2000, Riversmeet had folded completely into the Barony, so I started volunteering again as MoAS, as Chatelaine, and finally, as Onyx Pursuivant for three terms (I think that makes me the longest serving). 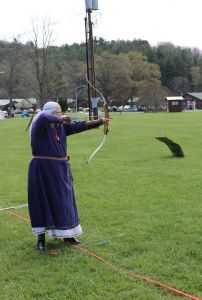 I wanted to have a gentleman fight and win me Crown. Princess of Æthelmearc, Queen of the East, didn’t matter. My first husband convinced me we should run for Baron/ess of Blackstone Mountain as well. We were only a few votes behind, I heard later. I had no idea of the work it’d be, so perhaps it’s a good thing those dreams didn’t come true.

Help Region One (WV) grow. We have a lot of people down here who are not getting the recognition they deserve for their Skills, whether Arts, Service, or Fighting. We have the least number of Peers out of all Seven Pearls and Five Regions, and I think that needs to change. People deserve to be recognized for their work! 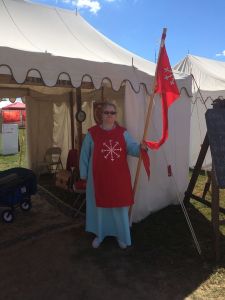 Well, meeting Sitting Royals still gives me moments where I wonder if I’m worthy. However, as I started my third term as Onyx Pursuivant, Royals and other Peers were recognizing my name, and it was scary. I’d never done anything (in my mind) to get recognized by people from New York! My brother, Baron Ichijo Honen, then sat me down and asked me “How many Baronies are in Æthelmearc?” He then pointed out that there were only Seven Baronies, and Seven Baronial Pursuivants. I’d thought of Onyx Pursuivant as ‘just the local herald’. I’d never until then realized I was in such a small company, and it scared the holy heck out of me because I was Being SEEN.

Well, there’s this bid I have in for Crown Tourney, and it’d be really nice if I can pull that one off. It’d be my third Crown, once as Co-autocrat, once on my own. I got a great site, I got a great crew, I want to make it special, as this will be the Crown to pick Pennsic 50 King. 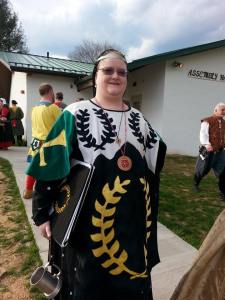 Take your time to explore and find your niche. Try everything once, do it often if you like it, and don’t jump into the Officer Pool until you’ve got your feet under you and know you want to do the work.

Play an instrument perfectly. I’ve plucked around on borrowed harps, tinkered with hammered dulcimers, mangled songs with a recorder, and beat the drums, but I’m very much an amatuer at it. I’d love to have the knowledge to play one of these, or any of these, with real skill.

While it might have been exciting to be in the 70s when the SCA was first expanding, I’ve been part of Region One history for three decades, and and I’ve seen Æthelmearc go from Principality to Kingdom, seen three of far Southern Shires grow, mature, and become a Barony. I’ve been part of history, and I’m proud of that. 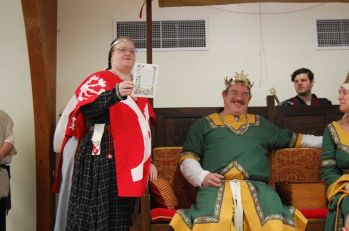 I’ve been told I’m being watched for Order of the Pelican, but I’d really like to one day try for Baroness of Blackstone Mountain again. Baroness Kathryn MacLuing has a nice ring to it I think.

If you could pick one thing you would like to see more of in the SCA, what would it be?

More recognition for those who, for whatever reason, can’t travel outside their Region to Be Seen. More travel by Peers from the North to down here in the Far South, instead of expecting people to go to them. Yes, it’s a far trip South to Blackstone Raids, but Ice Dragon is just as far for us.

Would you like to participate in “Populace in Focus”? Find out how here:

Populace in focus wants you!