Being the Chronicle of the Courts of Timothy and Gabrielle, King and Queen of Sylvan Æthelmearc, held on the first day of January, AS 54 (2020), at New Year’s Resolutions in the Barony of Endless Hills. Submitted by Lord Snorri skyti Bjarnarson, Jewel of Æthelmearc Herald.

Court was opened after a fine day of fighting, and Their Majesties, having been seated upon Their thrones, bade the assembled populace to seek their comfort, then gave leave to Their Excellencies Endless Hills to conduct their court.

At the completion of the Baronial Court, the court of Their Majesties was again resumed, and they had summoned before them Dauidh O’Doolin. They spoke of his activities as a fencer and his helpfulness, and spake that they were desirous of many more subjects of this caliber, and so saw fit to Award him Arms, to be determined at a later date in consultation with their College of Heralds, with a promissory scroll writ by THL Alianora Bronhulle. 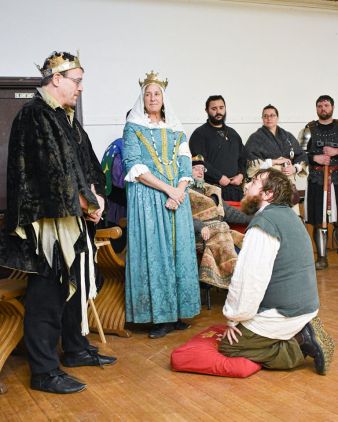 Dauidh receives his Award of Arms.

Once Lord Dauidh had departed, Their Majesties next demanded the presence of Daven M’Kinnay. They spoke warmly of his helpfulness transporting many gentles to various weekly practices and his efforts at those practices as well, and so desired to also Award him Arms, to be determined at a later date in consultation with their College of Heralds, with a promissory scroll writ by THL Alianora Bronhulle.

Daven receives his Award of Arms.

Once Lord Daven had departed, Their Majesties then required the attendance of Bjorn of Nithgaard. Words came from our King of this man’s work in the fencing community, and as Their Majesties were well-pleased by this, it was decided by Them that it was necessary to Award him Arms, to be determined at a later date in consultation with their College of Heralds, with a promissory scroll writ by THL Alianora Bronhulle.

As the cheering settled, Their Majesties requested the Scarlet Guard Herald come before them, Lord Nikola Gaetano. Words were said of his service in the heraldic community, and then Their Majesties deemed it just to induct him into the Order of the Keystone, with a scroll from Lady Gemina of Krull.

Next, Their Majesties called for His Lordship Lotharius qui et Segimundus, and spoke glowingly of his hard work running practices and helping at events, quiet but necessary service for the continued operation of our Society. Because of this service, they inducted him into the Order of the Keystone, with a promissory scroll writ by THL Alianora Bronhulle.

Their Majesties next called for the attendance of Their Noble Order of the Millrind. His Majesty opined that their order seemed to be short a member, and so had Lady Julianna Woolworth brought before the throne. His Majesty spoke of her efforts cooking feasts, running fundraisers, and acting as Baronial Seneschal, and so saw fit to add her name to the rolls of that order, with a scroll writ by Mistress Arianna of Wynthrope. 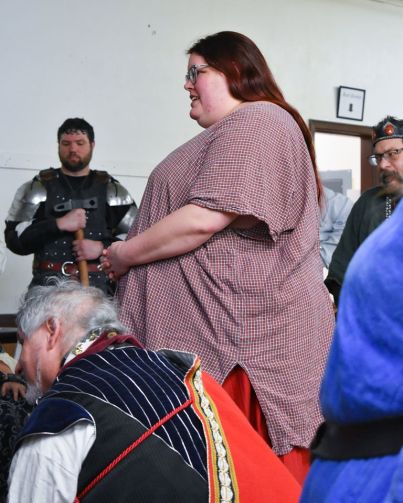 THL Julianna is inducted into the Millrind.

After that, Their Majesties both stood, and began to speak of a particular gentle, of whom they had become most dependent on during this reign, who had become a constant presence and solid backstop for all to lean against on the Royal staff. Their Majesties then had called before them Her Ladyship Antoinette de Lorraine, and made her a Baroness of Their Court, with a scroll by Baroness Barbary Rose. 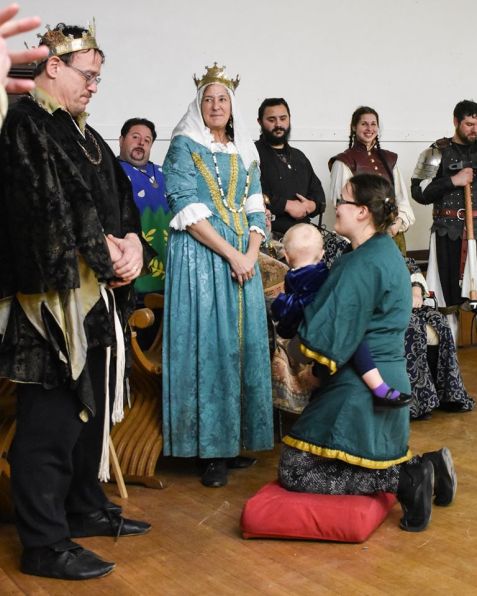 Lady Antoinette is made a Court Baroness.

Finally, Their Majesties called for all scribes there present who had contributed to the day’s court, and gave unto each of them a token from their own hands.

There being no further business, court was adjourned.

Some minutes later, court was re-opened, and Their Majesties invited Lady Christina Mary Lowe, called Jinx, and spoke quietly to her of her accomplishments in the arts, and created her a member of the Order of the Sycamore, with a promissory scroll writ by THL Alianora Bronhulle.

There being no further business, the Sylvan Court of Æthelmearc was closed.

All photos by Lady Christina Mary Lowe except the one of her, which was taken by her lord.