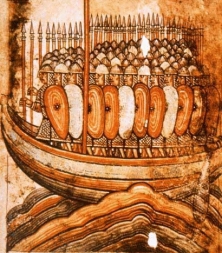 On November 14 and 15, Beowulf the Ethereal Event will present all of Beowulf, performed live on Zoom.

Beowulf the Ethereal Event will be livestreamed to the East Kingdom’s YouTube channel: https://www.youtube.com/c/SCAEastKingdomEthereal

The poem tells the story of the hero Beowulf who rescues the Danes by killing the monstrous Grendel. He goes on to kill Grendel’s mother, become king, and then in his old age must face a dragon. Throughout the story, he learns lessons about kingship, feud, and the dangers inherent in fighting a monster

The performance will be presented with the natural, organic backgrounds of our homes such as bookshelves, workshops, home offices, kitchens, and living rooms.

We will tell the story without stage magic, but instead will use the available medium to bring Beowulf into the homes of the audience.

While the exact age of Beowulf is not known, the anonymously written poem is the earliest work of full scale English literature.

Beowulf consists of 3182 lines of poetry. It takes three and a half hours to perform it in its entirety.

Director Toki Skáldagörvir is excited to be a part of the production.

“Beowulf is still relevant today. Leadership matters, well-earned loyalty is essential, and pride is a dangerous path,” Toki said, adding that Nietzche’s much later advice was true for Beowulf, and is true today, “Beware that, when fighting monsters, you yourself do not become a monster.”