Everyone over here knows about jolly old white-bearded Santa Claus, delivering gifts through a chimney, lured there by the enticing smell of cookies and good behavior on Christmas eve.  Many know this modern character is a reinvention of the European December 6th celebration of Saint Nicolas. What many might not realize is that the Saint Nicolas celebration is based on a real historic figure. And that the celebration itself, the giving of gifts, or coal, to our children goes back for so many centuries the tradition is actually SCA period. Forget Santa Claus and leaving him chocolate chip cookies – let’s celebrate Sinter Claes and have an historic excuse to hurl ‘pumpkin spice’ cookies & candy at the kids instead! 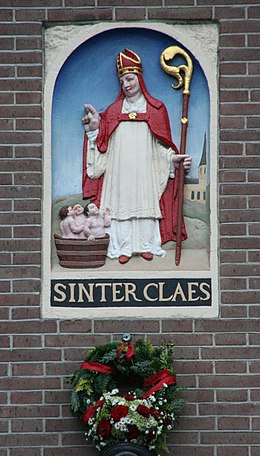 Saint Nicolas and the three boys he supposedly brought back to life (a variant of the three daughter legend). This is a typical Dutch wall insert, 16th century, at the Dam in Amsterdam, of which saint Nicolas is the patron saint.

The saint Nicolas is the patron saint of children, the poor, seafarers, butchers and merchants and became the patron saint of numerous churches in merchant cities like Antwerp (Belgium) and Amsterdam (the Netherlands). Currently more than seventy churches in the Netherlands are dedicated to Saint Nicolas, he’s that famous! The person Nicolas was born in Turkey, which was part of the Roman Empire at the time. He became bishop of Myra and died December 6th, 342 CE. A church was built on top of his grave which then became a popular pilgrimage destination. Centuries later, in 1087 CE, his remains were relocated to South Italy out of fear Muslim invaders would destroy them. At first, Saint Nicolas was only revered in Eastern Europe, but after his relocation, and as a patron saint of seafarers, he quickly gathered following in Western European coastal nations as well and by the 13th century December 6th had become his official name day or saint’s day.

This all sounds pretty normal for many of the Christian saints… So, what happened that morphed Nicolas of Myra into the well-known modern children’s icon Sinterklaas, as he is now known and celebrated? There are only a few historic stories (legends?) known about Nicolas of Myra. The best known is about a poor man with three daughters whom, thanks to the gifts of Nicolas of Myra, could properly marry instead of being sold into prostitution. To help them, Nicolas strew money through the open window, the likely genesis of the practice of strooigoed (strewn candy, specifically associated with this celebration) and, later, chocolate coins.

The Painting “De sinterklaasviering” by Jan Steen from ca. 1665 shows several traditions still in use today: the singing of saint Nicolas songs, the chimney with gifts in front of it, candy – and a whipping cane in the shoe of the bad kid (there is always one)

The celebration of Saint Nicolas coincided from about 1300 to 1600 with the folk celebration kinderbisschopsspel (children’s bishop game). A child plus retinue would be chosen December 6th as the Children’s Bishop and provided with food and gifts until December 28th. The other kids would receive a gift of money and a day off to celebrate December 6th.  Probably the oldest mention of this practice, dating to 1360, was found in Dordrecht, the Netherlands, quickly followed by a similar mention in Gouda, in 1363. By 1403 we first see the connection with spiced cake in the mention “honic, claescoeck en taert aen die kynders, op hunne patroen St. Nyclaes” (honey, klaas cake and pie for the children, at their patron saint’s day St. Nicolas). Medieval German and French cloister schools would celebrate Saint Nicolas Day with a miracle performance, where Saint Nicolas himself would appear to praise good students and reprimand the lazy ones.

A modern rendition of the medieval Klaaskoek, made with the help of a carved wooden mold.

In the late Middle Ages, in conjunction with the Saint Nicolas festivities arose the Saint Nicolas Markets; a similar development as the modern day European-style Christmas markets, inspired by the traditional German Weinachtsmarkt although perhaps a wee bit rowdier! The market would be visited after church, to buy gifts for the Saint Nicolas celebrations. One of those gifts could be the klaaskoek. [1] Hopeful boys would offer this cake, which is in the shape of a man and spiced with speculaas spices, [2] to a girl and if she accepted the klaaskoek… Quite likely inspired by the legend where Nicolas of Myra helped the three poor daughters get married.

The klaaskoek is still known to this day and age, even if its use as a marriage maker is mostly forgotten. [3] Another practice, and one that has become ubiquitous with the Sinterklaas celebrations even today, is the leaving out of a shoe. By the 15th century, poor people would leave a shoe in the church for the rich to donate money which would be distributed under the poor. Descriptions from the 16th century tell of children leaving out a shoe filled with oats and straw. [4] Parents would trade the contents of the shoe for toys, candy, ginger cookies, marzipan, pepernoten (peppernuts) and speculaas (speculatius cookies) – both made with speculaas spices. Other traditions would be the strewing of candy, often by an unseen entity, the singing of Sinterklaas songs and the giving of gifts on saint Nicolas eve – all traditions still practiced today.

Of course, after the Reformation not everyone was as amused with all the frivolity associated with a religious festivity and party pooper protestants tried to cancel the festivities, thinking them to be catholic superstition. Around 1600 Delft forbade the celebration of Saint Nicolas and other cities forbade the putting out of shoes and the sale of saint Nicolas specific cakes and candies. Instead, and influenced by Martin Luther, the saint Nicolas celebrations changed from a religious to a folk festivity. Even though the saint himself lost standing after the Reformation, the tradition was so popular that the celebration never completely stopped, not even with ultra-conservative protestants. Over time, the religious festival changed into an outdoor folk festival which again changed into a family celebration.

Interestingly, Saint Nicolas was not always portrayed as a stately bishop with a white beard and a red miter. [5] Likely due to the prohibition for northern Dutch protestants to portray catholic saints, saint Nicolas became portrayed as a scary black dude with leg-chains he would rattle to mortify kids into good behavior. [6] Sometimes called Zwarte Klaas (black klaas), this iteration of saint Nicolas developed into Zwarte Piet (black Peter), beloved by twentieth century kids’ helper of saint Nicolas, handing out candy to the good kids, giving coal to the bad – but also slightly white washed, so to speak, as twentieth century Zwarte Piet is assumed to be black from traveling up and down the sooty chimney to deliver the goods. Guess our parents’ generation was not that proud of that bit of Golden Age either – and the twenty first generation did away with Zwarte Piet altogether. Not quite sure about their substitute, [7] I doubt many kids will take candy from a Krampus!

By the 18th century, the back story of Saint Nicolas now portrayed him as coming from Spain – somewhat plausible as his ‘second’ home in South Italy at one point was part of the Crown of Aragon, associated with Spain. But whether he was thought to come from Spain, or only traveled to Spain to source oranges and other delicacies – the connection between saint Nicolas and Spain, his travel by steamboat and his servants gained a permanent foothold in the public imagination with the publication “Sint Nikolaas en zijn knecht” in circa 1850 by teacher Jan Schenkman. His book was so popular, that even its illustrations influenced public perception and saint Nicolas’ look as a stately old man with white beard, red bishops’ hat and mantel, and entourage of many black servants, the zwarte pieten, became the standard from then on. The ever-popular family tradition gained one more phenomenon in the mid-twentieth century hen gifts would start to be packaged in fun and unusual ways, [8] often accompanied by rather sketchy poetry.

At around the same time, in the 19th century, saint Nicolas emigrated to America, taking his white beard, red clothing, gifts and cookie tradition with him, and gaining a flock of reindeer along the way. [9] Having grown up with Sinterklaas, and having a kid growing up with Santa Claus, I think I prefer the one with the best cookies and candy. I am not in need of any klaaskoeken but man, do we miss the pepernoten… Santa Claus has no idea what he’s missing out on!

[1] ‘klaas’ is shortened from Sint Nikolaas, or Sinterklaas; which in turn became, when translated to English, Santa Claus, in case you were wondering.
[2] spices of klaas; very similar to pumpkin spice – yeah, not a new thing.
[3] Sad to say, I had never heard of it.
[4] for the horse, not saint Nicolas – who’d need a bribe a saint, right?
[5] the pointy hat; but not at all a wizard’s hat, even though he and the bag of gifts fits through a chimney, and he rides a horse on top of tiled roofs… yeah, not at all magical.
[6] oops.
[7] the history of Krampus goes back a long way, but its connection with Saint Nicolas is country specific. I had never heard of Krampus until Dutch society started looking for a zwarte Piet substitute. And while kids might prefer the brightly clothed, candy dispersing Peters, adults really, really took to dressing up in sheep skins, wearing horns and bells and going on parades to scare each other.
[8] the gifts would be called surprises, but with a Dutch accent. Ever received a gift-wrapped frozen pig’s head containing a set of silver earrings from your mother-in-law? That’s how that happens. It’s kind of similar to Secret Santa, but person-specific, and so much fun when played with creative people (often needing many months of R&D…).
[9] unsure how that happened. And why anyone trade in a perfectly fine Dutch Warmblood for a bunch of flying reindeer is beyond me.
[10] whom quickly caught on that ‘believing’ in both was advantageous.

There is much more to be found on this fascinating multi-cultural, multi-continental celebration. I did not even get to the Scandinavian variant, let alone Krampus! For easy reading check out the suggested WIKI pages – be aware that English counterparts are not necessarily carbon copy translations – and perhaps follow the trail of their bibliographies.