Imagine, if you will: you show up at an event and the autocrat runs up to you and begs you to come up with a thrown weapons tourney. The marshal in charge couldn’t make it and you are the only responsible marshal available. Assuming that the site already has butts and stands, what can you do at the drop of a hat? 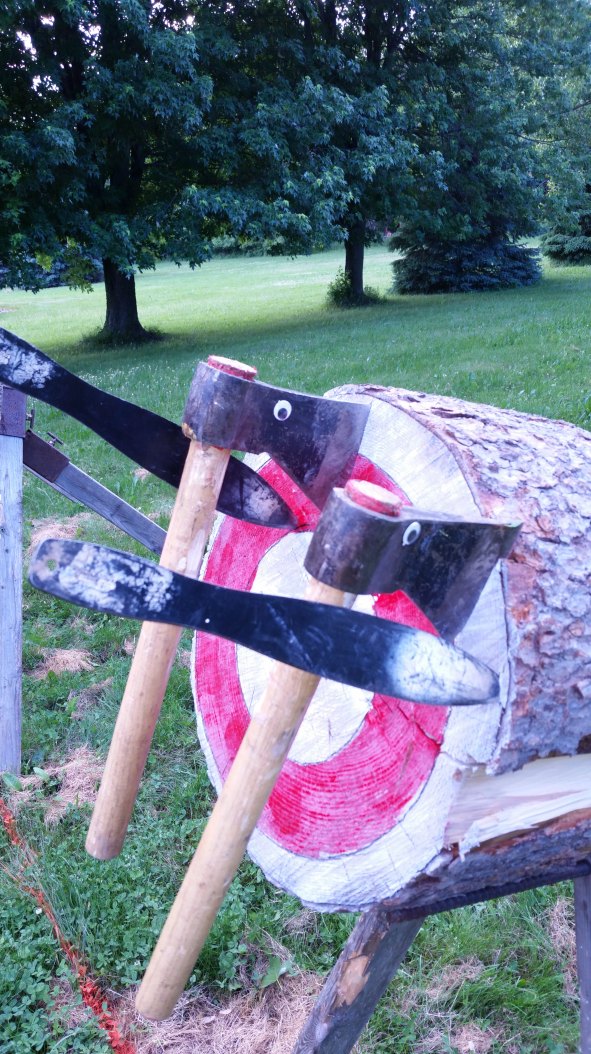 If you have a few stands and butts painted up in royal round circles (a 3-inch, a 8-inch circle, and a 14-inch circle, concentrically arranged) you have a number of options to run a nice tourney.

Now, while the butts shown in these pictures are not in the appropriate colors for a TW royal round, the circles are the correct diameter. When I prepared them for the season, I only had red and white paint available. I like how they turned out and I think that they can be more versatile.

If you have four butts available, you can use the first two for a royal round: the first for axes and the second for knives. This is, of course, assuming that you can have a 20foot line on your range. I like incorporating a royal round within my tourneys. First of all, it allows every participant to throw a royal round. Secondly, it’s a no brainer for the tourney. It sets the format for the rest of the targets: two flights of two weapons at 10 feet and one flight of two weapons at 20 feet. And, with four butts, if you run a complete royal round, that’s half of your range taken care of.

For the other two butts, here are some suggestions that require no added hardware:

1) Reverse scoring: The royal round scoring is 10 points for the center, 7 for the next ring, then 4, and finally 1 if the butt is large enough. For reverse scoring, the outer most ring is worth 10 points, the next ring inward is worth 7, and so on. Years of practicing hitting the center of target can make it difficult to hit the outer ring on purpose. You can make any weapon that crosses a line count for the higher of the two points if you’re feeling nice.

2) Alternative scoring: With the two color butts shown in the pictures, you could make white worth 10 points and red worth 5. Or visa-versa. You can make any weapon that crosses a line count for the higher of the two points if you’re feeling nice.

3) Only hit one color: Pick a color and that is the only scoring color. Red is worth 10 points, white is worth 0. If you want to make it more of a challenge, only hits that are completely inside the color counts.

4) Breaking the line: To score, you have to break a line and hit two colors at once.

Need more than five suggestions? Do you have duct tape?

6) Left and right: Put a strip of duct tape vertically down the center of the target. The first weapon has to hit the left-hand side of the butt and the second weapon the right-hand side. 10 points for each stick in the correct side, 5 points for a stick on the wrong side.

7) Down and up: Put a strip of duct tape horizontally across the center of the target. The first weapon has to hit the bottom side of the butt and the second weapon the top side. 10 points for each stick in the correct side, 5 points for a stick on the wrong side. If the first weapon is aimed at the bottom half of the butt, the handle won’t be in the way of the second throw.

8) Quarters: You need two strips of duct tape, one horizontal and the other vertical; crossing in the center. With four weapons, you have to hit all four corners. Say 5 points for each stick and a bonus 10 points for hitting all four sectors. If you do this one at both 10 and 20 feet. the thrower will have six chances of hitting the four corners.

9) Split the tape. Put the tape on the butts as in the previous 3 examples. The goal is to hit the tape. 5 points for hitting the tape. 10 points for sticking completely in the tape and 1 point for a stick anywhere else.

Let me just take a moment to talk about points. Royal rounds are 10, 7, 4 and 1 point, but you can make any other style of target whatever point value you wish. I highly recommend that you pick number that are easy to add up. 10 points, 5 points, and 1 point values are easy to add up. This will make your job easier at the end of the tourney when you are trying to figure out the winner before court. I also believe that for a general tourney, every stick should be worth at least 1 point. And no negative scores. Negative points and zero point targets are fine for championship finals, but are very discouraging for novice throwers. We cannot encourage new throwers if we run tourneys where, even if they stick on every weapon, they walk away with 0 points or fewer. We can save that for the top tier throwers

All photos by Master Caleb Reynolds.