This article was submitted by Baroness Hilda.

Not headed to A&S Faire this weekend? Need to get your martial on? Want to prove your prowess at it all?

Then come to the Iron Comet Challenge (and Baronial Champs) in the Debatable Lands this Saturday!

ALL are invited to participate in any or all of the Iron Comet Challenge tournaments – the more, the merrier. Enter one, or enter up to all!

However, the Iron Comet Challenge is designed to discover the most well-rounded gentle with the greatest prowess in the martial and gentle arts. To be a “Challenger”, you will participate the 4 martial tournaments, and also the A&S Competition. The lowest martial score will be dropped (meaning you can choose not to participate in one), and each Challenger will be ranked in each form.

We also choose a Youth Iron Comet Champion! Same rules, except there are 3 martial tournaments (fighting, archery, and thrown weapons) and the A&S, and the competitors may drop one martial form if they desire. 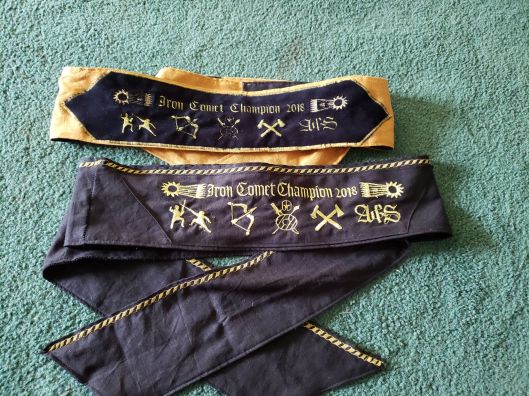 This prestigious day of competitions is only run once every two years.  The winner will be known throughout the land as the Iron Comet Champion! And has the right to wear and keep Iron Comet Champion regalia. Come and see who is the best of the best! Is it you?

Also, those who participate in ALL the forms will receive recognition. In the entire history of the event, only 3 adults have ever done so: Master Annais, Don Marcus, and Lord Robert MacEwin. Will you be counted among them?

The Debatable Lands will also be running the martial Baronial Championships in conjunction with the Iron Comet Challenge this year. Read more HERE.

NOTE: Their Excellencies invite all to partake of the Sweets remove during Court. Please stuff your face with deliciousness during Court!

And Thank You to the Shire of Steltonwald for letting us use their site.